Towards the end of the 2 minute trailer for Teen Wolf Season 3B, Scott asks Stiles a pertinent question: “Are you going to be okay?” If he asked the Teen Wolf fandom the same question right now the answer would be a resounding no. Or perhaps we would turn the question around like Stiles does, because everyone is very concerned for the citizens of Beacon Hills. The message is clear, no one is okay. As we hurtle towards new episodes, the release of the trailer has sent everyone spiraling into a pit of masochistic anticipation.

This is your spoiler warning, be warned.

The first half of Season 3 presented a darker edgier Teen Wolf, but if the trailer is anything to go by the first twelve episode are nothing compared to what’s coming next. Scott (Tyler Posey), Allison (Crystal Reed) and Stiles (Dylan O’Brien) are dealing with the consequences of the sacrifice they made at the end of 3A, and, by the looks of it, they are not doing well. Paraphrasing Stiles; Scott can’t transform, Allison is being haunted by her dead aunt and Stiles is straight up losing his mind. To top it all off, someone’s controlling a serial killer and there appear to be demons (with origins in Japanese mythology) terrorising the town.

To say I’m excited would be an understatement – despite the rampant inconsistencies in 3A I am still immensely attached to these characters and determined to stay with them to the end. Luckily the release of the trailer has increased my excitement rather than hampering it. One of the major issues with 3A was the disconnect between the villains and the main cast of characters – considering that 3B’s villains appear to be directly connect to Scott, Allison, and Stiles’ sacrifice they probably won’t have that problem this season.

In order to amp up the excitement they released the trailer in four parts – in order to view each part fans had to put the gif’d footage into the right order. The four parts were released over four hours and while I resisted the pull initially I ultimately caved joining the fun. And fun it was.  It was also a great way to make the fandom feel involved, I certainly appreciated the trailer a lot more having earned it (even if it wasn’t particularly hard). Fortunately the game was not just a distraction because the trailer is actually pretty good and I am definitely more amped for Season 3B having seen it. 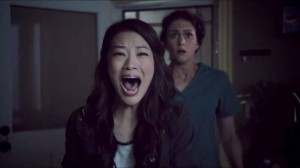 The best part is that the footage we were given was genuinely frightening, especially the masked figure that leaves Lydia and Isaac in a puddle of tears, and serial killer William Barrow (Doug Jones). I think I’m going to have to watch this season with the lights on because the last 30 seconds of the trailer had me reaching for some kind of weapon. They are definitely upping the intensity levels this season and from what we have seen they seem to do be doing it well. Unfortunately it’s not the intense dramatic moments that worry me, it’s the little things that seem to be missing.

Episodes 1-12 suffered from a lack of emotional depth. There were a lot of big dramatic events but there was no follow through, we didn’t get to see how these events affected the characters involved. Of course that might be because they were saving all the consequences for the second half of the season. But I’m a little disappointed that the trailer was all shade and no light. They need to give these characters something, so that it hurts more when they take it away. 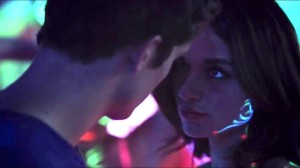 romance hinted at. Allison and Isaac (Daniel Sharman) seem to be taking their flirtation further but it’s okay because Scott seems to be moving on with new introduction Kira (Arden Cho). Lydia (Holland Roden) is seen cosying up to both Aiden and Stiles. Speaking of Stiles, he’s locking lips with a mystery girl that fandom is desperately trying to discover the identity of. Popular theories include; Lydia, Shelley Hennig’s top secret mystery girl or Zelda Williams’ Caitlin (who was last seen in episode 303 “Fireflies”). Although considering Stiles confidence, the consensus seems to be that it has to be some kind of hallucination. Happiness does not seem to be on the cards for our faves.

Everything we have seen of new girl Kira is incredibly enticing, and I can’t help hoping that she doesn’t suffer the same fate as many of the female characters that have come before her. Considering that Jennifer Blake (Haley Webb) turned out to be the Darach, it’s unlikely Kira will end up being this season’s big bad, but never say never. I’m intrigued by the idea of her and Scott together, especially because I’m finding it difficult to imagine Scott noticing anyone that is not Allison, although I can’t say I’m disappointed to see him broadening his horizons. It’s the kind of character development this show sorely needs.

I have no doubt that 3B will be extremely entertaining, Teen Wolf always is, but I am still hoping for something a little more emotionally satisfying this time. Maybe I’m expecting too much, but I don’t think so. Teen Wolf has proven that it has the ability to follow through with emotional beats and make us feel way more about an MTV show about werewolves than we thought possible. So I don’t think it’s unreasonable to expect the same connection from future episodes.

That said, the premise for the season is intriguing, the trailer is exciting (although the lighting could be a problem, someone tell them that it doesn’t have to be dark to be intense) and cast’s performances just keep getting better. So ultimately I am eagerly anticipating Teen Wolf’s return on January 6. I’m ready to lose my mind, are you?