The Walking Dead 7×09 Review: Rock in the Road 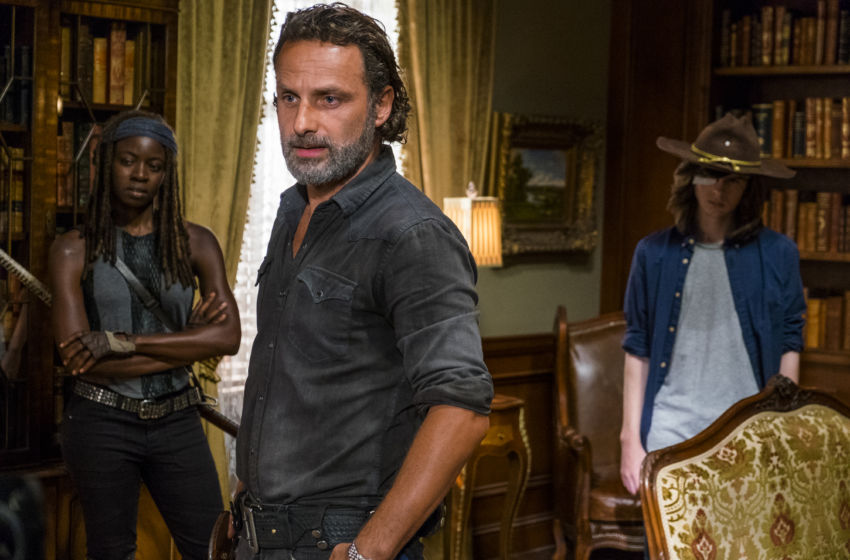 It’s pretty clear that The Walking Dead no longer cares about obeying normal run times…the question is, was that okay in tonight’s midseason premiere, “Rock in the Road”?

No. No, it wasn’t. Nothing about this midseason premiere was good. I mean, I tried to be okay with it…gods know I tried. But when I can only focus on the fact that “Rock in the Road” ran approximately an hour and fifteen minutes with commercials, and yet only THREE of those minutes were actually entertaining…well, that’s pretty damn sad.

Let’s be real – the first half of season seven hearkened back to the farm episodes that comprised most of season 2 – those being the episodes that have previously been deemed part of the worst ever season of The Walking Dead. 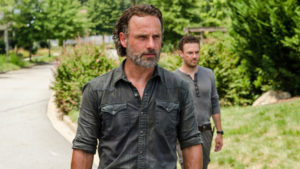 Now, while there were many complaints about how gory the season seven premiere was – enough to make the producers announce that they would be toning down the violence in the second half of the season – I’m not certain that “Rock in the Road” really proved that TWD was going to dumb down the graphic nature of this show. And to be honest? I, personally, don’t want them to…but I also understand how fans who have been watching since the beginning can’t comprehend the current direction this series is taking.

And “Rock in the Road” was essentially proof of all of the above. Cue the Hilltop-Alexandria-Kingdom triangle? Check. Cue Hilltop leader Gregory being so awful that his people are obviously already gunning for Maggie to take his place? Check. Cue random side story where Gabriel steals all of Alexandria’s supplies and disappears, all without explanation? Check.

No seriously. What. Is going on. With this show.

I’ve tried so damn hard to remain…if not entertained, at least *ambivalent* about The Walking Dead. But “Rock in the Road” stretched from 9 PM EST until almost 10:15 PM, and there were approximately three minutes of the episode that were actually entertaining. 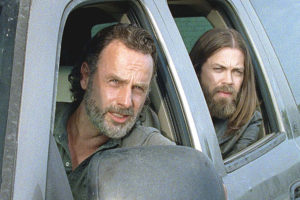 Seriously, if you were to ask me about anything that happened in “Rock in the Road”, I could pull up my notes and recite what I saw…but that doesn’t mean I’ll ever actually care about or understand it. I can tell you that there is a scene during which the main characters are trying to salvage dynamite from a trap left by the Saviors, and my OTP (that would be Rick + Michonne a.k.a. RICHONNE) hardcore clothesline a mob of walkers – because that was fu#-(#-ng awesome.

Yeah, that’s right – as much as I didn’t care for this episode overall, there were sure as hell some interesting developments. Even the cheesy meeting between Rick and Ezekiel is clearly going to serve its purpose…and probably before the end of the season. I hope. Because let’s be real, The Walking Dead is running on fumes. I mean, I’m not even a “Caryl” shipper (no offense meant to those who are), but if Daryl remains in the Kingdom (or its surrounding areas) for more than one episode without running into her, I’m gonna call this show’s bluff on anything regarding Carol and Daryl…and to be honest, I’ll do the same if Daryl comes between Carol and Ezekiel! (What can I say , we all have our ships…)

Of course, “Rock in the Road” ended with Rick and co. going out to search for Gabriel and the supplies he took, but in the end they were surrounded by strangers. Is this as worrisome as it seems, or did Rick have a right to be grinning as if nothing was wrong? We can only hope that we find out in next week’s episode.

Because if not, you know, what the fu#-.