The Walking Dead 7×01 Review: The Day Will Come When You Won’t Be

WARNING: This review contains spoilers for “The Day Will Come When You Won’t Be” as well as minor references to events that happened in the comics 50+ issues ago.

First of all, as much I’ve always been a Rick fan, I think it was a bad decision to have the season 7 premiere be entirely about him. Even when it wasn’t supposed to be, it was, and to be honest, that really took away from the more meaningful aspects of “The Day Will Come When You Won’t Be” – those aspects being, of course, the deaths.

Yes, that’s deathS, not death. While I’m personally not surprised that the producers chose to kill both Abraham and Glenn, I think it was a bad decision to kill both of them in the season premiere. It was a cop-out; I absolutely believe that it was done for shock value alone, and I just can’t get behind that. 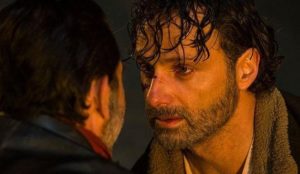 Not surprisingly, they didn’t reveal who died in the opening – or even after the first commercial break, for that matter. Additionally, before they did finally make the big reveal, they replayed the entire “eeny, meeny, miny, moe” scene from the season six finale. Again, not surprisingly (at least for me, due to “rumors” I heard, as well as general speculation), Abraham was Negan’s first choice – and yes, I think they should have stopped there, despite the fact that Abraham was one of the least important characters they could have killed off, especially as his comic book death went to Denise (sort of, anyway) last season. And despite having heard that there were two deaths, I chose to believe that in a way, the show was still doing what it usually does – its own thing.

Unfortunately, that wasn’t the case. When Negan tried to force Rosita to look at Lucille (the weapon that had just killed her former lover) Daryl just had to step up. Now, Negan is what he said he is: that being nothing if not honest. Glenn had already broken his rule about everyone staying still and quiet(ish), so when Daryl broke it again, that meant that something would happen – but I’ll give them this, at first I didn’t really believe that it would be another death.

And yet The Walking Dead apparently couldn’t use this chance to kill off a character they created solely for the show (especially one who is such a huge fan favorite)…instead, they chose to not tell that different story they keep saying they’re telling. Instead, they chose Glenn as their second kill, and his death was almost shot for shot what happens in the comics. 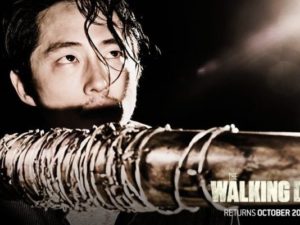 Now, Steven Yeun specifically asked that Glenn’s death not be given to anyone else, and while I disagree with the show’s choice to randomly-almost-exactly follow the comics, I agree that the end result was understandable. That said, what bothers me the most is that Glenn’s death isn’t just going to be used as plot fodder for Maggie – now it’s also part of Daryl’s story, and I have serious concerns that the show will take that too far. And what about Tara? Glenn was the first person from The Group who she truly bonded with, and she still doesn’t even know that her girlfriend is dead! (Seriously, sometimes I wonder if the TWD show writers think about what they’re writing before they make these major decisions.)

Despite spending all of these words talking about the REAL things that happened in “The Day Will Come When You Won’t Be”, there’s certainly more that I could – and probably should – mention. I already made it clear that I didn’t care for the fact that the episode was experienced via Rick, and I can’t ignore the constant references to his hatchet and the constant mentions of the/his “right hand”. (This is me ignoring the fact that the weapon is actually a hatchet and yet Negan insists on calling it an axe.)

I think at this point it’s almost impossible to not know that in the comics, The Governor chops off Rick’s right hand pretty early on. The fact that the show has teased that plot point more than once – a plot point that comic fans have generally assumed would never happen because of how difficult it would be to have a main character who is missing a hand for half (or more) of the series – is more than frustrating. It’s obnoxious.

Of course, “The Day Will Come When You Won’t Be” is, as I said, all about Rick, so even though he didn’t lose his hand, at least half of the episode was spent either in his head or with him and Negan. Why did Negan need to taunt Rick, put him in danger, and then save him anyway? It was all showmanship, but the thing is, Negan is a villain who really doesn’t need that nonsense. And in the end, it didn’t even work! Rick still wasn’t bowing to Negan the way Negan wanted, so he tried to make Rick cut off Carl’s forearm.

I have to admit that I was something like relieved when Rick broke down and Negan accepted that. Not because I care so much about Carl keeping his left forearm, and no, I didn’t enjoy Rick’s ugly crying…but because in the end, I think losing a hand or forearm would only work if it happened to Rick. Although the The Walking Dead has mixed up quite a few comic plot points and story lines, the loss of a limb is a major thing, and Carl is already missing an eye. If you ask me, his time would be short if he suffered another serious loss…and I still don’t think TWD is willing to kill off Rick or Carl anytime soon.

We did get a weird musical scene at the end. It wasn’t a montage, and it was badly edited, but it existed. And even though “The Day Will Come When You Won’t Be” was still told from Rick’s perspective, we also got to see Maggie break down. To be honest, it was only after Michonne spoke up and insisted that they weren’t leaving Maggie – and that they were taking Abraham and Glenn’s bodies with them – that I felt any emotions at all about this episode. Sadly, they ruined it with a cheesy closing shot of a walker collapsing to the ground to eat the brain remainders and a closeup of Rick’s face as The Group drove away from the scene in the RV (which was suddenly working just fine). 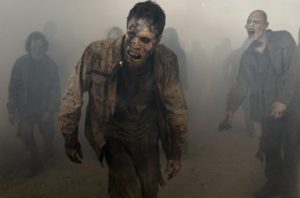 Not for the first time, I felt that they were trying to make an episode very “artsy” and failing miserably. “The Day Will Come When You Won’t Be” didn’t need to be artsy – it needed to be real, and in that respect it failed. But in the end, there was one shining beacon in this mess of a season premiere – that being Jeffrey Dean Morgan as Negan. No, he couldn’t drop f-bombs like he does in the comics, but The Walking Dead is doing a great job of creating a villain to despise while also making it hard to hate him – he’s attractive (subjectively, I suppose), he has quips, and he clearly has control. He’s horrible, but he’s TWD kind of horrible. ::Insert 2016 election joke here:

Seriously, though – Negan is awful. And yet Jeffrey Dean Morgan somehow makes him…let’s say palatable, for lack of a better word. I doubt I’m the only person who understands that it’s been a while since The Walking Dead has relied on truly good acting to get by, but in the case of Negan’s portrayal, that’s exactly what they’re doing – and at this point, that’s what’s going to keep me watching.

How did you feel about the season 7 premiere? Do you think “The Day Will Come When You Won’t Be” lived up to the hype? Let us know in the comments!