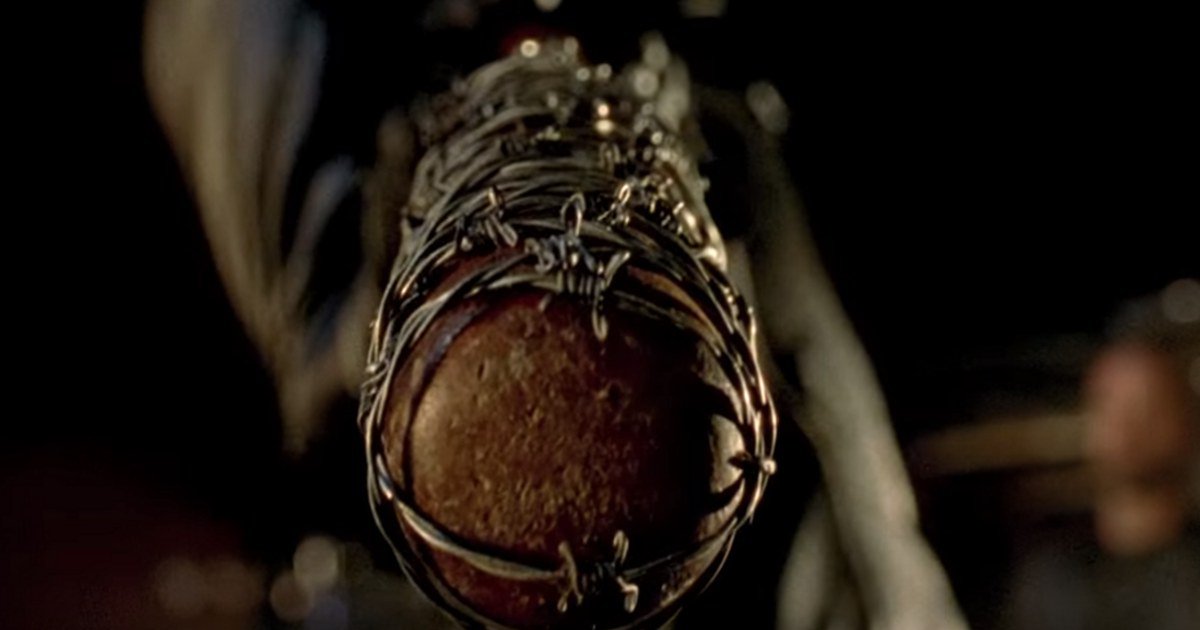 The first thing I said when I heard that The Walking Dead‘s season finale “Last Day On Earth” would be 90 minutes long (well, including commercials, of course) was, “I have a bad feeling about this.”

WARNING: Spoilers for The Walking Dead season six finale “Last Day on Earth” follow; additionally, please note that the comments on this review may include season seven speculation.

Not surprisingly, I had every right to be concerned about “Last Day On Earth” – and obviously not just because of its run time. Last week I wrote about some comments that Andrew Lincoln and Norman Reedus had made regarding this episode, and while I can’t speak for every Walking Dead comic fan out there, I definitely disagree with Andrew Lincoln essentially saying that comic book fans wouldn’t be disappointed.

Before I get into all of that, though, I suppose I’ll talk about the truly awkward scenes featuring Morgan and Carol – both characters who I once loved, but who I’ve grown to dread seeing on screen (Morgan for a while now, though my uncertainty about Carol is a more recent thing). Honestly, I can’t be the only person out there who felt that they were the most unnecessary part of “Last Day On Earth”…and for me it doesn’t help that cutting them would have put the episode pretty close to its normal run time. 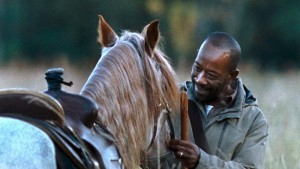 I really wanted to believe that seeing more Morgan and Carol interaction could actually be a good thing (or even just an okay thing). But it was drawn out, with all sorts of random moments (like Morgan “killing” the walker who’d hung himself). I suppose these could be breadcrumbs leading to something that will happen in the future, but if so it wasn’t well done. After last week’s “East“, we knew that a switch had gone off for Carol, and personally I couldn’t imagine that Morgan of all people would be able to change her mind. Yeah, they got “rescued” in the end by people with horses and armor (a reference from which comic readers will surely draw some possible – even likely – conclusions)…but considering everything else that’s going on, it’s hard to believe that Morgan and Carol are truly in good hands – or that she will actually change her mind about not being able to kill, even if Morgan did kill that Savior to protect her.

Basically, one way or another I can’t imagine that either one of them is long for this world. (That world?)

Despite all of the cutaways to the Carol & Morgan Sideshow, the majority of “Last Day On Earth” focused on Rick and Co. trying to get Maggie to the doctor at the Hilltop. And yet everywhere they turned, they met with obstacles. No, like literally, every road they took was blocked. Not that I expected them to actually get to the Hilltop – too many spoilers were leaked in the week leading up to this episode – but after a while I couldn’t help but think, “Get on with it already!” I mean really. We’ve heard about Negan for weeks. We’ve seen groups of his people everywhere, and it’s been made abundantly clear that he has no shortage of followers. Do we really need two separate groups of people and cars blocking their way, followed by a walker chain gang doing the same, followed by a wall of giant tree trunks that are set on fire, followed by The Group figuring out a plan and then getting herded into the final trap anyway? Again I have to ask, was the 90-minute run time really worth all of that? 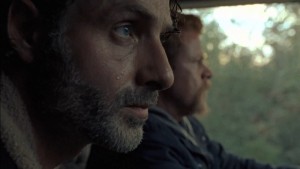 First there was the charade about who was joining Rick on the trip, with both Eugene and Aaron having to insist that they wanted to go with him while Abraham and Sasha were just like “what’s up, we’re going and you can’t stop us”. Plus Carl basically imprisoned Enid, and we also have to wonder how well Gabriel and Spencer can protect Alexandria. To be honest, I’ve been feeling pretty great about Gabriel lately, and I can’t help but trust his promise to do everything he can and always make Judith his first priority. Spencer, on the other hand…well, let’s just hope that if the Saviors come around while everyone is gone, he actually listens to Rick’s order (“Tell them to wait for me – I’ve got a deal for them”). 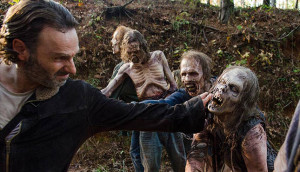 And then there was the random guy who the Saviors chased down, beat half to death, and then hung in front of Rick and Co. At first I thought maybe he was from the Hilltop, and I suppose there’s a chance he’s part of whatever group Morgan and Carol are apparently taking up with…but considering this random stranger’s comment about all of his people being dead, unless I missed something I believe he really wasn’t anybody “important”. He was just a message from the Saviors; a dark message, yes, but nothing like Rick and the others realizing that some of the walkers in the “chain gang” were wearing items from Michonne and Daryl. And I’m just not sure how I feel about that, if only because Rick ordering everyone to let the man die to save bullets was a bit too reminiscent of his leaving that hitchhiker on the road back in the season three episode “Clear“.

Of course, the whole thing with the hitchhiker didn’t really turn out too badly for anyone except said hitchhiker, while “Last Day On Earth” clearly ended VERY badly for one of the main characters. And by main, I mean either Michonne, Glenn, Rosita, Daryl, Eugene, Rick, Carl, Maggie, Aaron, Abraham, or Sasha. And we knew it was going to be SOMEONE’S last day on earth, because how many times did they repeat that line throughout this episode? Seriously, it happened over and over again and then even Negan made sure we knew that he was going to kill someone.

Speaking of that whole scene, when it finally happened I was actually kind of underwhelmed. Was Negan’s entry great? Yes. Is Jeffrey Dean Morgan amazing in this role? So far I would say *absolutely*. But ugh, could they have drawn things out any more? And on top of that, they did so for a cliffhanger ending that was at best forced and at worst just plain obnoxious.

No really, that scene was what, eleven minutes long? Ish? And the vast majority of it was Negan talking. And Negan is a really freaking awesome villain. And I love Jeffrey Dean Morgan. But I feel like he was being directed to take it [way too] slow and to enunciate in a somewhat obnoxious manner to make up for the fact that the character can’t throw around the f-word (site rules guys, sorry) the way he does in the comics.

Negan did finally do his “eeny, meeny, miny, mo” act, but despite the fact that The Talking Dead claimed that there were clues about who was killed, they weren’t showing some characters while Negan was playing his little game, and at times they also moved out of order. I’m sure there will be plenty of people trying to figure out who died – if you ask me there are three possibilities – but if it’s the obvious one I’m going to have a difficult time watching The Walking Dead after we finally find out…six plus months from now.

Seriously, I can absolutely understand the show runners’ desire for a season finale cliffhanger, but ending “Last Day On Earth” the way they did was just poor form. I don’t know how else to say it: they’ve simply gotten too cocky. I’ve felt it throughout most of the second half of this season; possibly even before that, when they did such a bad job of teasing Glenn’s death. I know that they want people to be shocked, but ending with a fade-to-black that was paired with the sickening sounds of Negan using his barbed-wire-wrapped bat Lucille to bash someone’s head in was just too much. If you’ve read the comics (or been spoiled about what happens in them), you know who Negan’s first victim is…and to be honest, I’m not sure I’ll be able to watch The Walking Dead if I wait through this long hiatus only to find out that they actually followed the source material.

Don’t get me wrong – I’m not outright saying I’ll quit the show (just yet). I just haven’t enjoyed many of the recent episodes, and “Last Day On Earth” is definitely on that list. How did you feel about the episode as a whole, and/or about the fade-to-black cliffhanger? Do you have theories about who Negan killed? Let us know in the comments!