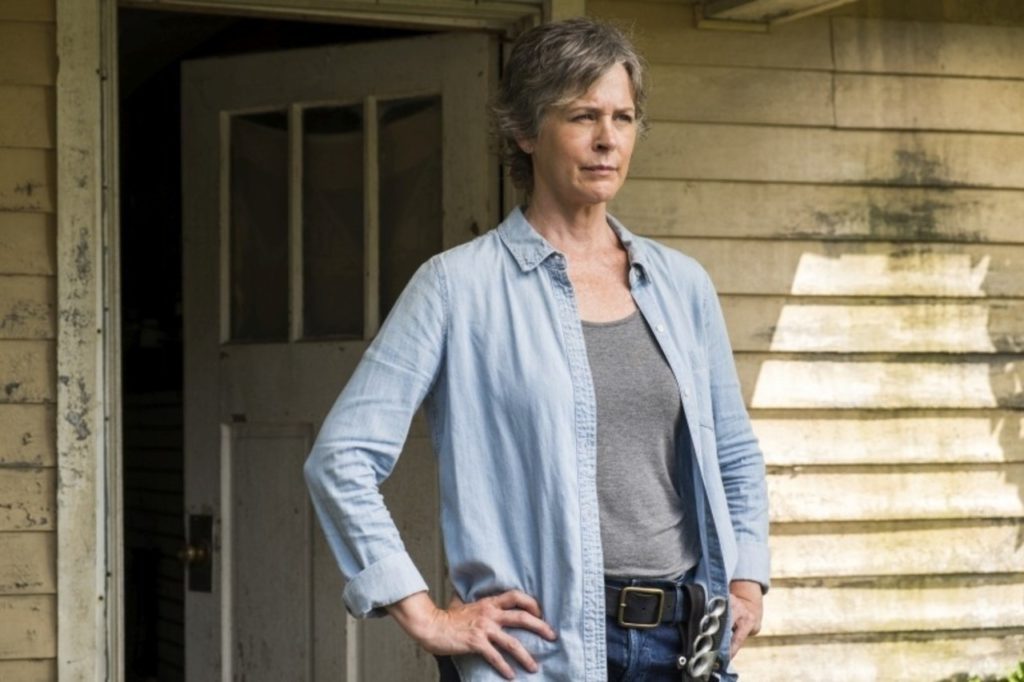 The Walking Dead has definitely put out some strange episodes prior to this one, but the overall weirdness of “New Best Friends” definitely takes the cake so far.

“New Best Friends” focused on the Kingdom and on what happened to Rick and co. after we saw them surrounded by strangers in last week’s midseason premiere. The cold opening definitely had me rolling my eyes because it was clearly meant to drive the point home that tensions are high between the Kingdom and the Saviors. And yeah, I’ll admit that I kind of hoped that the Saviors taking Morgan’s staff would lead to Morgan actually taking a stand. More on that later, though…because it was obvious early in this episode that the Kingdom story line was actually all about Daryl and Carol. 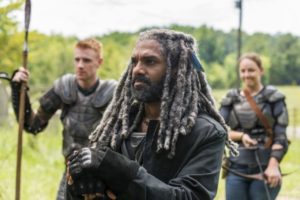 First, the way that Daryl found out about Carol living nearby was drawn-out, convoluted, and therefore unnecessary in my eyes. Seriously, unless something happens VERY soon that harkens back to Richard’s plan to attack the Saviors and leave a breadcrumb trail that leads back to Carol, I’m calling BS on this whole scene. And while these old best friends in “New Best Friends” did have a sweet and tearful reunion, that reunion felt out of place in this otherwise offbeat episode.

On top of that, while I understand the writers’ decision to have Daryl leave Carol in the dark about what’s really going on with the Saviors, I can’t lie – I was hoping that he would tell her the truth and that we’d see badass Carol once again. That said, I can’t imagine that she won’t find out eventually, unless of course they simply quietly write her out of the show. (Which isn’t likely given Carol’s popularity; more likely they’re setting her up for a tragic death, and probably one that happens sooner rather than later.) 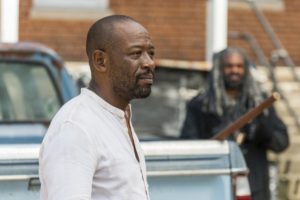 Meanwhile, it appears that Morgan’s brief honeymoon period of being sort of cool again has worn off, because I don’t know about you but he’s getting on my nerves. As previously mentioned, there was a moment at the beginning of “New Best Friends” when he used his staff to protect Richard and therefore lost said staff to the Saviors…but after that he folded back into himself and became same old preachy, frustrating Morgan again. Between that and the fact that Daryl is apparently BFFs with Shiva the tiger (::eye roll::) I was completely done with the Kingdom plot by the time the episode wrapped up.

I will leave you with this one prediction, though – and mind you it’s just a [slightly educated] guess – IF Richard attacks the Saviors, and IF he leaves that trail back to Carol as planned, and IF the Saviors take/kill Carol, that very well might be what finally leads to Morgan breaking with his current ‘peaceful’ ideals. (And let’s be real, it will probably be the breaking point for Ezekiel joining up with Rick as well.)

As for Rick and co., well, that whole situation is what made “New Best Friends” as irritatingly weird as it was. I understand that the writing, the music, and even at times the staging were meant to make viewers feel uncomfortable, and in that they absolutely succeeded. Unfortunately, in doing so they took things way too far. The strange clipped sentences and sometimes outright code-speak used by Jadis and her group was difficult to follow at times, the music was so off-putting that it was outright distracting, and I can’t for the life of me understand how the little deal Rick and these people agreed to is going to work – for Rick and co., that is. 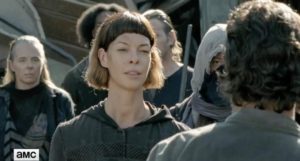 But I mean hey, at least we finally found out who was watching Alexandria and its people (especially Rick and Aaron on their supply mission to the boat) the first half of the season.

(Although I would like to know who Winslow the armored walker was and how they GOT all that armor on him in the first place.)

(Also that Gabriel explanation was weak. I’m glad he didn’t do anything wrong but everything about this whole situation is awkward and I just want it to go away.)

You know, I get it – the show is building up to something. But as I said last fall, they’re taking their sweet time doing it…and based on comments from many fellow fans, I know that I’m not the only one who is frustrated with this season’s awful pacing, and I’m not even sure the show can completely rectify that, no matter how big of a bang they go out with in the season finale.