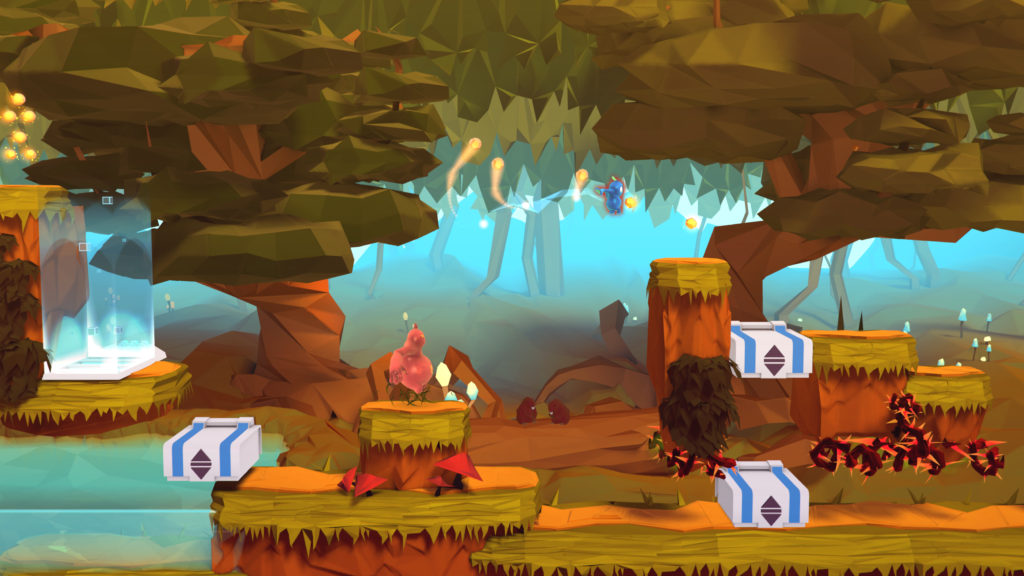 Shift Happens, an indie title described as a “puzzle platformer for two”, will be released on Xbox One and Steam on 22nd February, 2017!

Shift Happens challenges you and a friend — or better still, significant other — to take control of Bismo and Plom, two jelly blob creatures that were joined together in a freak accident. The duo must use their newly-acquired power — the ability to exchange their size and skills seemingly at will — to survive 40 levels (30 for solo players) and four unique worlds (including a freaky laboratory, overgrown green forests, dry canyons filled with deadly winds, and bitter cold caves).

“Teamwork” is the name of the game. When shifting, both characters change sizes simultaneously in a symbiotic relationship. The bigger blob gets smaller — and the smaller blob gets bigger:

*   The smaller blob can jump higher/farther, move under small barriers, and be “launched” by the bigger blob à la Titanfall 2.

You and your partner can earn coins and other collectibles in every level. However, instead of sharing the wealth, it’s possible to “accidentally” cause each other to die — turning your hard-earned coins into a neat little package that’s up for grabs. Will you trust one another and work together — or will you fight for every scrap? The choice is yours!

Check out the enjoyable trailer!

Shift Happens will be released for Xbox One and Steam on 22nd February. The Xbox One version will retail for $14.99. The Steam version can be bought for $13.50 during the first launch week after which it too will be priced at $14.99.

Also, a PS4 version is expected to be released soon.

What do you think of Shift Happens? Let us know!