Voltron Legendary Defender Does Not Deserve Points For Queer Representation For Shiro! 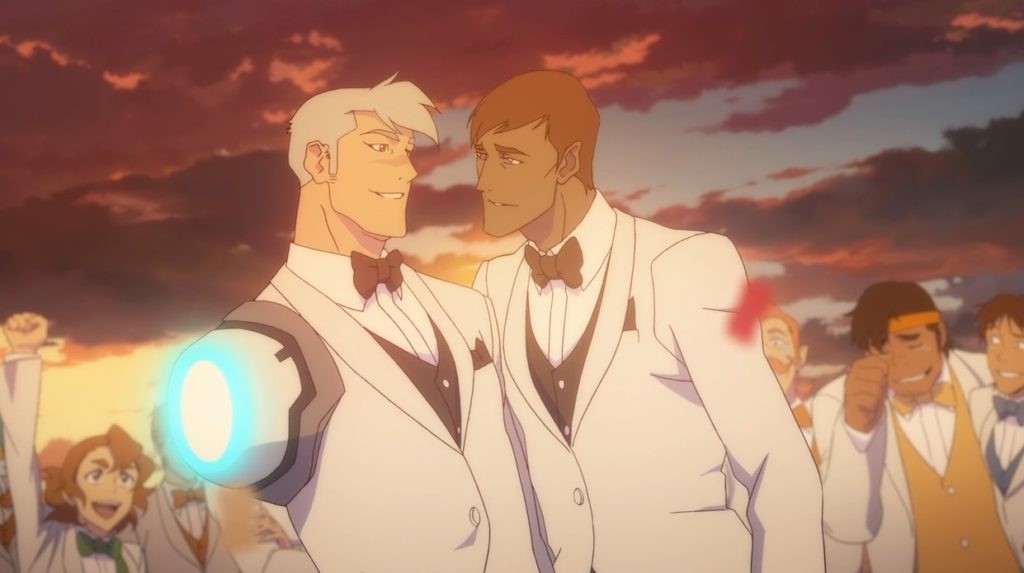 Is the reason they didn’t show Keith’s expression is because he isn’t happy? Ha! (Image: Screengrab)

It is always frustrating to see when a show decides to destroy all of the potential it has when it comes to queer representation. Voltron Legendary Defender Season 8 showed how the writers didn’t learn anything after the backlash the animated series received over how Shiro was handled in the previous season. And yes, VLD does not deserve any of the queer representation points the writers were clearly aiming for!

I wrote a piece back in August about how Voltron Legendary Defender Season 7 decided to reveal Shiro as gay and how the writing showed him easily fall into the ‘Sad Gay’ trope. The reveal was met by backlash from the fandom which led to the showrunners writing an open letter.

While fans were understandably disappointed about Shiro’s treatment, some of them were looking forward to the final season of VLD in hopes the showrunners learned something and would give the character his due.

But then, Voltron Legendary Defender Season 8 was made available on Netflix and it was a mess, especially during the last 10 minutes of the finale. Do make sure to read Jamie’s review.

Not only did the show kill Allura for emotional exploitation, the ending they give Shiro was out of character. I understand the fandom’s frustration with the decision to marry off Shiro to some random guy.

Certain fans feel not liking the wedding makes them homophobic or being ungrateful considering it is the first marriage between male characters featured in a Western animated show. Others think it was a cheap afterthought to please the queer audience and get some queer rep points for VLD.

Marrying Shiro off to some random guy is not representation! The writers could have used this opportunity to have a minor character come out, someone the audience already knew a bit and could imagine being married to Shiro down the line.

Also, if the show wants us to believe Lance can become some Altean-hybrid through a kiss, you know the fandom would have been okay with Adam coming back. The writers could have had Allura change reality in some manner to save Adam. It would have been better than the random guy Shiro tied the knot with.

Furthermore, the rest of the Paladins weren’t shown to be married. They ended up working to make the galaxy better. So, making Shiro the only one who settled down to find happiness didn’t sit well with me. They could have had him on the Atlas continuing to do good in the world. The writers could have still thrown in a random guy as his husband on the ship, but still, a Shiro who continued to play a role in making the universe better would have felt in character.

In a way, how VLD wrote Shiro can be considered as representation because they gave us a character (with a lot of layers) who just happened to be gay in an animated series.

However, when it comes how the writers specifically handled his sexuality, all I can think about is tokenism, done only to get some queer rep points and failing in the process.

Previous:Voltron Ends Its Run with a Disappointing Finale
Next: How ‘Midnight, Texas’ Season 2 Destroyed Itself Through Poorly Written Queer Representation!