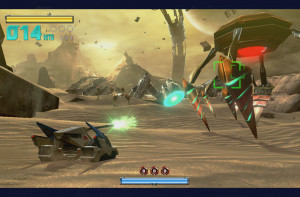 The anticipation surrounding Star Fox Zero has been enormous.

Between the humorous puppet introduction at E3 last year to the beautifully produced animated short last week, Nintendo has pulled out nearly all the stops in promoting the newest entry in one of its most beloved franchises. The question is, did it live up to the high expectations that were laid out over the past year? To put it briefly: yes, but with a few issues.

First off, like most Wii U titles, Star Fox Zero is visually stunning. Each location in the main quest is wonderfully rendered and the unique levels create a cohesive and believable world. Even though the stages range from flying in deep space in all-range mode to driving the Landmaster through the desert of Titania, everything feels as though it belongs together in the Lylat System.

The wide range of vehicles that can be utilized also adds to the diverse scenery and gameplay. I was pleased that the very first “mission” the player performs upon booting up the game for the first time is actually a tutorial on how to operate the Arwing. This is particularly useful for familiarizing the player with the various controlling options before starting the true first level rather than having to learn everything on the fly. Training mode is also available to practice and brush up on piloting the vehicles later in the game.

The tutorial also introduces players to the dual views on the television screen and Wii U GamePad. While the television screen provides the traditional third person view of the Arwing (or other vehicle), the GamePad provides the view from the cockpit. The third person view is great for maneuvering open spaces in all range mode and for generally having a feel for your location within the environment. Conversely, cockpit view is ideal for boss fights and operations that require more precise aim, and it offers players a highly immersive experience.

This immersion is further enhanced by the communication between the characters that has become iconic in the Star Fox series. However, Star Fox Zero takes this feature a step further by having the communications play out of the Game Pad rather than the television’s audio output. So, when you are focused in on your GamePad using cockpit view, you really feel as though your teammates are talking to you right there through your transceiver. As great as that sounds, unfortunately, the sound is not mixed very well between what comes out of the GamePad and what comes out of the television. I frequently had to turn my television’s volume way down in order to clearly hear what was going on with the communications without turning my GamePad’s volume up and the communications blaring over the background music. Sadly, I never found a good balance between the two.

Another sound-related issue is that of the health gauge. In most video games, players are given some sort of cue that their health is low in the form of beeping or flashing lights or something. The health alert beeping in Star Fox Zero is almost nonexistent. Yes, this does prevent some possibly annoying times when you are low on health for an extended period of time, but I experienced more deaths that I wasn’t even aware were coming due to this problem. It was only much later in the game that I even knew there was a beep at all because it is so hard to hear. Again, this goes back to the audio mixing, and is something that seems minor, but made a big difference during gameplay.

Generally speaking, the controls for Star Fox Zero might be my least favorite for a Wii U game to date. I’ve been a big proponent of the GamePad since I first held one in my hand. For the most part, Nintendo has made the GamePad exceptionally easy to use with coherent controls. Despite going through a tutorial at the very beginning, I still struggled to successfully pilot all of the vehicles at my disposal throughout the game. It felt as though I was recalibrating my crosshairs every few seconds. Sometimes, what could be seen in third-person and cockpit view just didn’t seem to go together, making it tricky to take down all of the enemies. Even when I was certain of what I was looking at, the vehicles didn’t maneuver in the way that I wanted them to. None of this made the game unplayable by any means, and like most games, the controls get easier with time.

Despite all of this, I was very pleased with the level of difficulty throughout the game. Star Fox Zero has a way of integrating new challenges all along the way to keep players from getting too comfortable. Of course, this comes at a price: dying a lot. After the third death on a stage, players are given an optional invincibility upgrade at the cost of having their score for the mission recorded. It isn’t too unusual for Nintendo games to provide a way for less-experienced players to press forward and still enjoy their games, but it is only fair to not record the scores of an invincible player in order to discourage people from not trying on a level.

Overall, I really enjoyed Star Fox Zero even with some of the frustrations I experienced. Truth be told, this was my first Star Fox game, but now I see the appeal of the series. All throughout the game, felt a strange sense of nostalgia. I was reminded of a time when video games were something you had to truly work at to make progress with. To me, the best part about Star Fox Zero is that the game provides very few hints on how to accomplish a task, forcing you to troubleshoot and solve problems for yourself rather than relying on a helper character to tell you exactly what to do. I didn’t even mind getting stuck or dying a few times because it gave me the opportunity to go back and try new things, and sometimes unlock completely different missions than the first time I played the level. Yes, the games does have its flaws, but it is ultimately very enjoyable.

Have you tried Star Fox Zero? Leave your thoughts below!