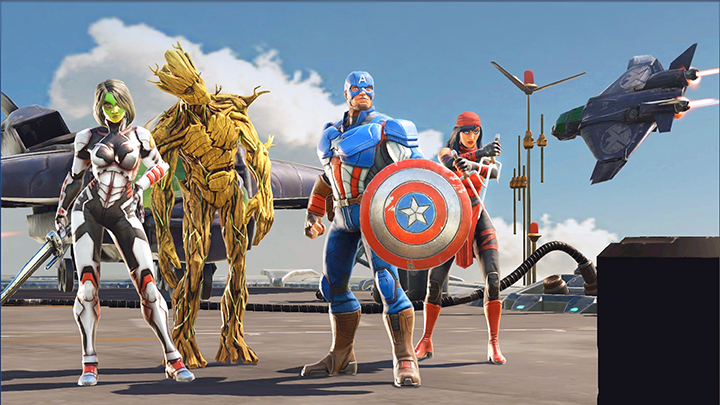 With Marvel Heroes shutting down, Marvel has announced a new game for fans to look forward to. Marvel Strike Force will be coming to mobile devices in 2018!

Developed by FoxNext Games, Marvel Strike Force will pit superheroes and supervillains against Ultimus. The trailer shows actual gameplay footage. Check it out!

“In “MARVEL Strike Force,” war has come to Earth as Ultimus, a Kree warlord, has jumped from one dimension to another, conquering every version of Earth along the way. He has finally arrived at our doorstep, and it’s up to us to stop him,” said FoxNext Games Creative Director Jason Bender. “The player commands S.T.R.I.K.E., the Strategic Tactical Reserve for Interdimensional Key Events; the only line of defense against threats like Ultimus.”

Players will be able to control five characters at a time. Currently, the game will have 70 characters to choose from. The characters include many of the Avengers, the Defenders, and the Guardians of the Galaxy. Spider-Man, Doctor Strange, and Night Nurse will also be available. Certain characters will be able to use team attacks when paired together. Marvel Strike Force will be free-to-play with in-app purchases.

A character’s gear and abilities can be upgraded. “For example, Daredevil might start out attacking a single target at a time, but will quickly grow to chain his martial arts maneuvers to multiple enemies in a single attack,” explained Jason Bender.

Players can also experience PvP battles as well as form alliances. “The Alliances that work together most effectively will be able to conquer the toughest Raids, but the mode is tuned to be fun for more casual players, as well,” said Jason Bender.

You can go ahead and pre-register for Marvel Strike Force. Pre-registration offers a 3-star Daredevil, 500 Power Cores, and 50,000 in-game Gold.

Even though there’s no news about the X-Men being a part of it, I’m looking forward to Marvel Strike Force because I enjoyed playing Marvel Future Fight.