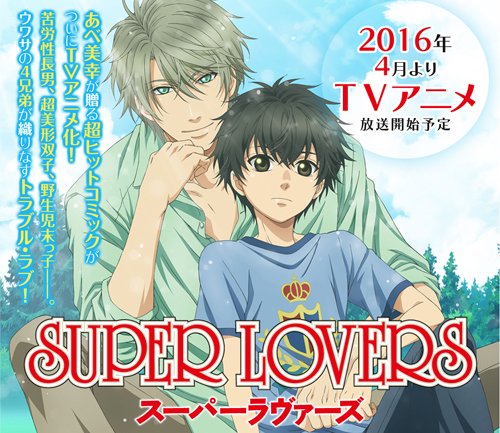 If you were feeling sad about the Super Lovers anime being over, then don’t be, because it is coming back for a second season early next year!

The Super Lovers anime is based on the manga of the same name by Miyuki Abe. It focuses on the Kaido household and their adopted brother Ren Kaido. The eldest brother of the Kaido family is the first one who is introduced to Ren, and from there their relationship blossoms into something more than just brothers. This dynamic might need some getting used to for some but nevertheless, Super Lovers is an enjoyable series.

The 10th and final episode of the anime’s first season aired this week and it revealed that the show has been renewed for a second season. The Kaido family will be back on your TV screens in January, 2017.

The first season of the anime premiered on 6th April, 2016. Crunchyroll has been streaming the anime as it airs in Japan. Here’s a description of the series:

“Fooled into coming overseas by news of his mother’s imminent death, high school student Kaido Haru encounters a boy who insists that he’s his brother. Haru does his best to raise feral and obstinate Ren, but there seems to be a secret behind Ren’s birth. On top of that, just when Ren begins to warm up to Haru, tragedy strikes. Five years later, Haru reunites with Ren, all grown up in Tokyo, but…” (via Crunchyroll)

It’s good that the anime got renewed for a second season so quickly. Fingers crossed that we won’t have to wait a very long time for a possible third season. I’m looking at you Junjo Romantica! Also, where is the next season of Sekai-ichi Hatsukoi?

What do you think of Super Lovers getting a second season? Have you enjoyed watching the anime? Let us know!