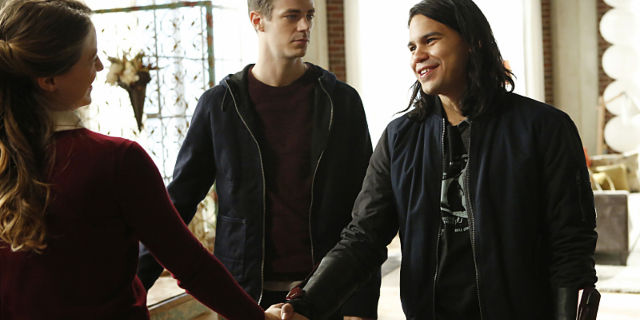 First, let me start by saying that while “Medusa” was a fine episode of Supergirl, as part of a crossover there was very little, well, crossing over. Odd temporal shifts happen occasionally throughout the episode – sure signs of a dimensional rift – but the cause isn’t revealed until the last scene, when Barry and Cisco appear in Kara’s apartment to ask for her help. Since this is a week-long event, it makes sense that they wouldn’t jump right in, but I just really love Kara and Barry together and was kind of expecting more.

Now, back to Supergirl. We learned what Cyborg Superman – aka the real Hank Henshaw – wanted from the Fortress of Solitude: a deadly virus that specifically targets aliens…except Kryptonians. A Kryptonian project code-named “Medusa”, Hank tests the virus at the alien speakeasy that our heroes have been frequenting of late. Every single alien in the bar dies, but all of the humans are fine. Mon-El, who followed Hank out of the bar and then proceeded to get his ass kicked, is also exposed to the virus.

Meanwhile, Kara uses her day job to try to ferret out what all Lena knows about her mother’s involvement with Cadmus. I’ve been waffling all season on whether or not Lena is evil, and this episode 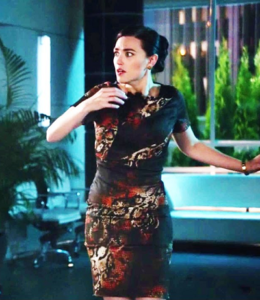 was like a ping-pong match on her motivations. She’s immediately suspicious of Kara’s sudden interest in her mother, so she calls Lillian to find out what she’s hiding. Later, when it turns out that the virus needs a rare element that only L Corp possesses, Kara tells Lena that her mother runs Cadmus. Lena refuses to believe it, accuses Kara of thinking her evil as well, and kicks her out. Then Lena joins Lillian to release the virus to the world…but she only did so in order to switch out the isotope, rendering the virus inert. Oh, and Lena called the police.

So this either means that Lena is actually good – a fact which Kara emphatically stated when she told her of her mother’s criminal exploits – or she’s a fantastic actress and her dastardly plot is even bigger than Cadmus’s. Perhaps she is truly trying to remake the Luthor image and use the company to do good. Or perhaps Lillian and Cadmus were an obstacle that needed removing. Who knows with Supergirl?

An alien virus is a perfect excuse to bring back Eliza, who worked with the DEO as they tried to find a cure and save Mon-El. Eliza’s return also gave Alex the opportunity to come out to her mother, which occurred in a very touching scene that had me tearing up. It turns out that Alex didn’t really need to form the words; Eliza seemed to have figured it out on her own, and she tells Alex that there is nothing that will stop Eliza from loving her. In the current political and social climate, it’s important to emphasize love, tolerance, and understanding. Alex still struggles with coming to terms with her sexuality, but the people she cares about are there to support her, and that is what matters.

The big question, of course, will be if Alex gets a happy ending. It certainly seems that way! Last week I was upset with Alex for her treatment of Maggie in the wake of her rejection, but this week Alex acknowledged that she was being unfair and they talked it out. It’s refreshing to see open, honest communication between a romantic pairing, and hopefully this will continue as they move to the next step in their relationship. After Maggie is shot in a confrontation with Cyborg Superman, she realizes that she was being ridiculous in pushing Alex away simply because she’s only just come out. Her brush with death makes her re-examine her feelings for Alex, and it turns out that they are more than simple friendship. Maggie says that life is short, and they should be with the people they want to be with. They kiss, and it’s beautiful. Now let’s hope Supergirl doesn’t kill one of them off for “shock value”.

In other romantic news, Mon-El has stepped up his attempts to court Kara…in the sense that he actually is starting. First, there is a very adorable scene where socially awkward Kara suspects Mon-El is flirting 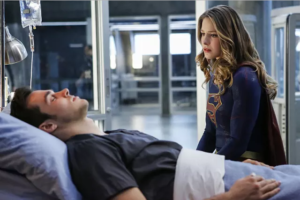 with Eliza; Eliza, however, sees right through his behavior and tells Kara that she is the object of his affections. When in quarantine later, Kara asks him about it, and I’m still not sure if he was trying to brush it off or if he was legitimately confused by her terminology.

Later, when Mon-El has started accepting that he may not survive, he kisses Kara, then passes out. I’ll admit that this is sooner than I thought, but given the fact that he was dying for much of the episode, I probably should have expected it. At the end of the episode, Kara tries to talk to him about it, but he doesn’t seem to remember the kiss. It seems fairly obvious to me, however, that he does remember and is simply pretending not to. He seems to have realized that she was freaking out and opted to feign ignorance rather than make her uncomfortable. I am totally on board with this pairing, but I’d rather they not rush things. I think both Kara and Mon-El have a lot to figure out before anything really happens.

In true Supergirl fashion there were a lot of little lessons to be had. Aside from Eliza’s gentle acceptance of her daughter’s sexuality and Kara’s realization that her parents weren’t quite as “good” as she thought, there was a scene between Kara and J’onn that tugged at my heartstrings. When the time comes for Cadmus to launch their missile and deploy the virus, J’onn intends to come along. Kara warns him not to, as she alone is immune to its effects. But J’onn knows that he is dying anyway, from his reaction to M’gann’s blood transfusion, and he would rather die as himself, on his own terms. Well, the virus doesn’t work and Eliza manages to neutralize the effects of the White Martian blood, so I’m very curious as to how J’onn moves forward from this. He was absolutely ready to die, to be with his family, and he didn’t. What comes next?

What did you all think of “Medusa”? Is this really the end of Cadmus? What will Winn’s hack on Lena reveal? Why did anyone think that Mon-El would just know what “stuffing” was?

The CW’s DC crossover continues tonight with The Flash at 8pm ET/PT!