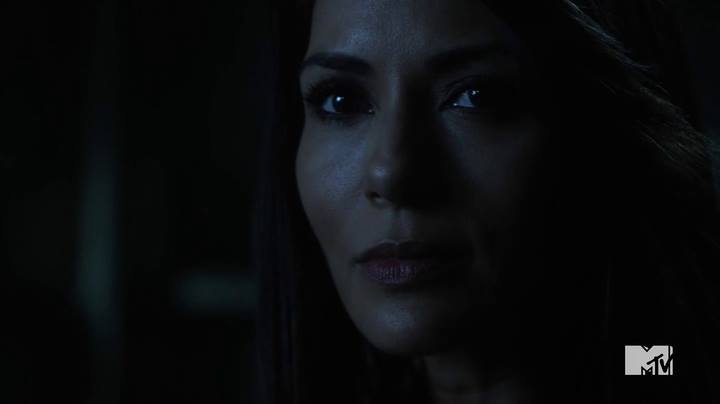 While this week’s episode of Teen Wolf delivered a few answers, it also gave rise to new questions… Again! Season 5A only has two episodes left, and I hope the writers are able to provide viewers some sort of closure regarding the Dread Doctors and don’t drag the plot into 5B.

The episode “Ouroboros” opened with Doctor Deaton doing some investigating in order to know more about the Dread Doctors, but before we could find out what he knew, the Desert Wolf made an appearance. I’ve been curious to see who will play Malia’s mother, and I was not disappointed by the casting. Marisol Nichols looks awesome in the role.

The only question I have is why she needs to use weapons in order to kill? Maybe she isn’t a supernatural being? My theory is that the Dread Doctors experimented on Malia when she was young because she was a cross-breed because her father, Peter Hale, was a werewolf. I think the Desert Wolf isn’t happy about having an abomination running around. Malia could very well be one of the Doctor’s successful experiments and her mother wants to put an end to her.

We got to see Dark Scott (Tyler Posey) this week. I don’t know about you all, but I like Dark Scott compared to the Holy True Alpha Scott. Making Scott a bit dark does add some much needed layers to his character. While I was happy to see him being more aggressive when it came to finding Liam (Dylan Sprayberry), I also know that Teen Wolf always hesitates going the whole way with Scott. The Berserker Scott from Season 4 was a huge disappointment, and I wouldn’t be surprised if the Dread Doctor problem magically gets fixed for him in the end, too, without him having to get his hands dirty.

While Mason isn’t my favorite (I still miss Danny), seeing him team-up with Scott and Malia to find Liam and Hayden (who I will refer to as baby Selena Gomez from now on) was good. It was refreshing to see Mason in scenes where he wasn’t ogling another male character. Having queer characters in a show is always a plus in my book – as long as the character’s sexuality isn’t their only defining trait.

Also how creepy was the scene where Theo looked at those two make out in the back of his car?

Seeing Theo manipulate the pack does come across as interesting, but it needs to have a satisfying pay-off in the end to have any impact. When will he make his final move against the pack? It’s clear that Theo wants what Scott has, but we all know he can’t have it because it’s Scott, the True Alpha. Theo’s just fighting a battle he has already lost. 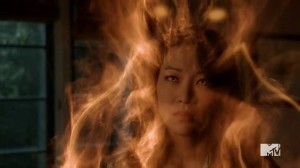 “Ouroboros” did try and answer some questions, but it was more or less what the audience already knew or suspected. We still don’t know the reason behind the experiments the Dread Doctors have been doing. Why are they trying to make the ultimate supernatural being? What is their endgame? Why did they experiment on Kira? Why didn’t her parents even bat any eyelash considering Kira’s mom is also an ancient kitsune and should’ve at least been able to sense the doctors or something?

Stiles (Dylan O’Brien) and Lydia (Holland Roden) found out about Parrish, but then again we still don’t know about the ‘why’. There are just so many ‘whys’ floating around in Teen Wolf and it would’ve been a good thing if we got to know about the answers to the ‘whys’ leftover from the previous seasons four seasons.

Also Stiles’s jeep sounds like it will be fine according to the conversation he had with the mechanic. Take that, Toyota!

What did you think of this week’s episode of Teen Wolf? Why did Kira have to leave? Do you think Sheriff Stilinski should tell Beacon Hills what’s going on? Will we get to know the motives behind the Dread Doctor’s experiments? What is Stiles’ first name now that we have confirmation it starts with the letter M? Let us know!