The New Jem and the Holograms: This isn’t your childhood Jem 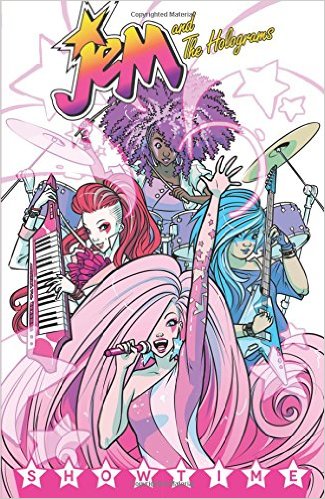 Forget that travesty of a Jem movie that was released in October (and that promptly bombed, for very good reason)… because back in March of this year the first issue of the Jem and the Holograms comic was published, and this is the true Jem for the new generation.

The original Jem and the Holograms cartoon aired from 1985-1988 and was a big part of my – and a lot of other people’s – childhoods. The fashion was amazing[ly 80s], the music was catchy, and I mean really, who doesn’t want to have a secret second life as a rockstar and get to spend all their time hanging out with their siblings who also happen to be their best friends? 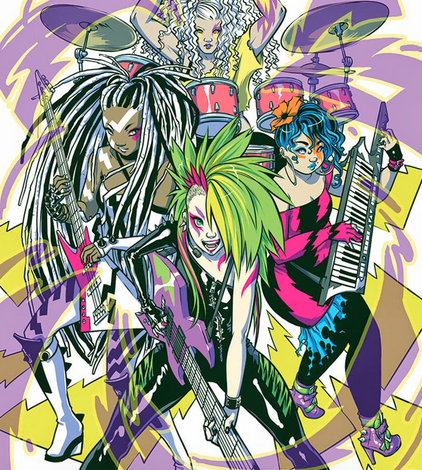 Of course upon rewatching, the 80s Jem show was beyond cheesy, bordering on problematic.  Take Rio, for instance – he was Jerrica’s boyfriend, but he was also basically in love with Jem…and no, he didn’t know they were one and the same person. And do you remember that time Eric Raymond had Kimber kidnapped and left tied and bound inside an active volcano? What about the Misfits basically running Jem and the Holograms off the road in the very first episode?

Listen, I get that it was just a cartoon, and I still love it for what it was even though I no longer see it through the rose-colored glasses of childhood. Because it still had so much potential – it featured some genuinely decent (if not downright good) people who were smart, driven, capable…and outrageous in the best ways possible (for the 80s, anyway).

Thankfully, though, when writer Kelly Thompson and artist Sophie Campbell got a hold of this amazing group of characters, they revamped it for the current times and made some of the best changes possible. Small spoiler here – admittedly, I miss the story line involving Jerrica taking over her deceased father’s business, because from what I’ve read so far that’s totally absent. But so much is still there – the main characters in their original [band] roles, the crazy hair, the awesome makeup, the rivalry with the Misfits, and more.

For all the similarities, though, there are other differences as well – and the vast majority of them are positive ones. The Jem comics feature women of all shapes and sizes, with interests that vary from technology to fashion to social media to reading. Some of them like men; some of them like women. Rio is, at least so far, a legitimately nice guy who really likes Jerrica and sees right through Jem (she’s a hologram, get it?). Plus the totally awesome pop culture references that include everything from My Little Pony to Iron Man to Twitter to Google alerts.

My biggest complaint is that the few times they share song lyrics, they’re a bit weak, but there are so many other great things about these comics that it’s easy to overlook this flaw. The art is stupendous – Campbell is especially talented at facial expressions – and although I do wish we still got to see Jerrica attempting to take over her father’s business, the rest of the storytelling is fun, and when I finally did read Showtime (the volume that is comprised of the first six issues) I literally couldn’t put it down. As in I stayed up until 3 AM one night trying to finish it and only didn’t because I couldn’t keep my eyes open.

The characters are simply real – what leads Jerrica to become Jem is different in the best way possible – and seeing a non-hetero relationship develop between two of the most absolutely adorably-written characters is insanely refreshing, especially for what is above all a pop culture comic. The fact that artist Sophie Campbell came out as transgender just after finishing the first issue adds extra oomph to the realm of representation that Jem and the Holograms offers.

Even if you weren’t a “Jem girl” growing up, even if you aren’t usually a huge fan of the comic medium, if you enjoy uplifting stories with great diverse characters, I can’t recommend this series enough.

Previous:Misha’s Minions Want YOU to Buy Farm Animals for the Holidays
Next: Supernatural 11×9 Review: O Brother Where Art Thou?