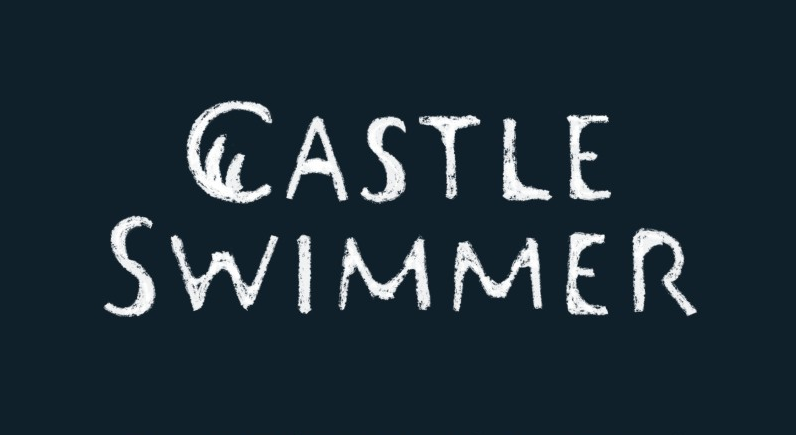 Sebastian the Crab may think living under the sea is the best thing in the world, but that’s not true for our two lead characters in Castle Swimmer, this week’s Wednesday Webcomic. 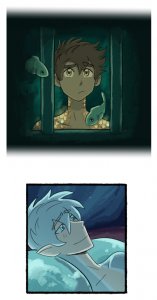 Castle Swimmer is a Webtoon I’ve mentioned before. It debuted on the platform in January with over 200,000 subscribers and 1.7 million global reads.

It’s the story of two young sea creatures whose fates are intertwined by something entirely out of their control, Castle Swimmer is a charming tale with two adorable leads. Siren is the prince of a community of mer-sharks beset by misfortune.

Their only hope is an old prophecy that says their curse will be ended when their prince kills the Beacon. The Beacon is a merling who was created to fulfill prophecies; he has no control over where he goes or what he does – he is guided by the god of the surface – and now he’s ended up in the sharks’ dungeon.

What happens when your entire life is ruled by a prophecy – your future foretold by people you’ve never met, who died long before you were born. Such is the story of two young sea creatures. One believed to be a guiding light for his people, a Beacon who will lead them to a bright, prosperous future. The other is a teenage prince for who’s destiny is to KILL the Beacon so that HIS own people might thrive. When both reject the course set for them, it leads to a raucous adventure as big and unpredictable as the ocean itself – and a romance that nobody could have predicted.

Siren was having doubts about his ability to take a life even before he saw and was immediately besotted with the Beacon. Now the two of them try to figure out a way to fulfill the prophecy without anyone having to die. 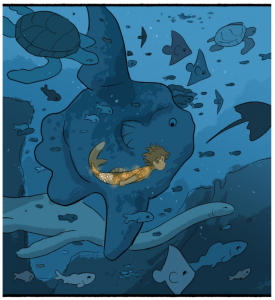 This world is filled with thriving societies of creatures of all kinds, though so far most of our time has been spent with the sharks. But we’ve only just begun with the story, which so far has posted 13 episodes, so I imagine that soon we’ll get to see more of the ocean.

What I’m most excited for is the romance. You can see hints of it right away; the first time Siren sees the Beacon, he gasps and blushes, enamored with his shiny golden tail. These cute little goobers are so awkward around each other, and it really is a delight to watch them stumble through the first signs of love. As much as I’m a fan of a good slow burn, you’d think that the water would speed things up a little!

If you’re looking for a sweet fantasy with an LGBTQ+ romance, you should definitely check out Castle Swimmer. You’ll even find yourself attached to the one-off side characters.