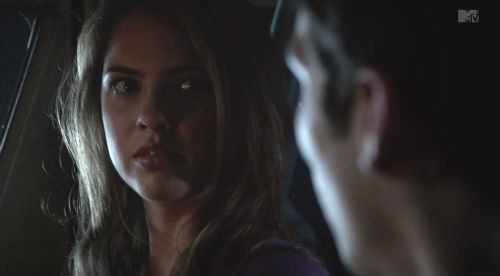 There’s been a great deal of controversy over the newest pairing in Teen Wolf, ever since the ship’s first appearance last season. In fact, the very mention of its name: Stalia, is apparently enough to drive Teen Wolf fans to each other’s throats.

For a show that has created and destroyed female characters more frequently than it features actual werewolf transformations, Malia Tate has stuck out from the rest in that she has decisively divided fans. She has been accused of being a Mary Sue, an abusive character, and just plain unnecessary. Perhaps if she had simply appeared as a new character with a focus on her struggle to be human and reunite with her long-lost creepy father, then maybe fans wouldn’t so anti-Malia.

But the writers of Teen Wolf performed a cardinal sin: they paired her up with Stiles. 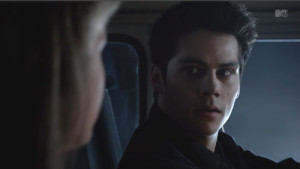 Aside from being a fan favorite, Stiles is also the token singleton. He’s the Everyman character and the link for fans to relate to a show about supernatural teenagers who are weirdly hot. Therefore, fans love to pair Stiles with any number of characters, the most prominent ships being Stydia (Stiles and Lydia) and of course, Sterek (Stiles and Derek).

While it’s starting to become to pretty obvious that Sterek was never going to become canon, season 3b featured plenty of moments that hinted at Stiles and Lydia finally getting together after two and a half seasons of Stiles pining for her: including Stiles and Lydia working together constantly, Lydia’s concern when Stiles’ goes missing, and Aiden’s convenient death.

But now, there’s Malia. And while fans are either stubbornly for her or viciously against her, it seems that the writers have honestly no idea what to do with her. Quite suddenly, both Sterek and Stydia are being unceremoniously pushed aside for Stalia, a ship that, quite frankly, doesn’t sit well with many fans. 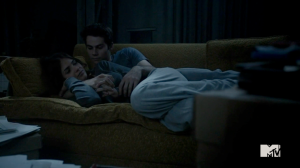 It all started back in last season’s “Echo House,” with its troubling vague-make-out-maybe-sex scene between the two characters. We’ve discussed the problematic nature of this scene before, and even actor Dylan O’Brien (Stiles) claimed at AlphaCon this summer that he refused to do a full sex scene between Malia and Stiles. It’s obvious that the audience also agreed that a sex scene would’ve been wrong and not a little creepy as they applaud Dylan, who responds happily, “Oh, I thought you guys would boo me for that.”

No, Dylan, we’re on board with teenagers who have mental health issues and/or a lack of social and emotional growth NOT having sex in the dirty basement of a mental health facility.

But that was last season. Maybe the creepy implications of Stiles and Malia (who let’s remember has been a coyote living in the wild since she was 9) hooking up have lessened with time and maybe the issue of consent is no longer one we have to worry about.

Sadly, the latest episode, “117,” put the kibosh on that hope as well. In an exchange of dialogue that was presented as a throwaway light-hearted moment, Stiles explains to Scott that Malia has been sneaking into his bedroom at night. Not only does she sneak in, but she actually crawls into his bed and lies beside him as he’s asleep. Then Stiles lifts up the back of his shirt and reveals something to Scott, who looks aghast. 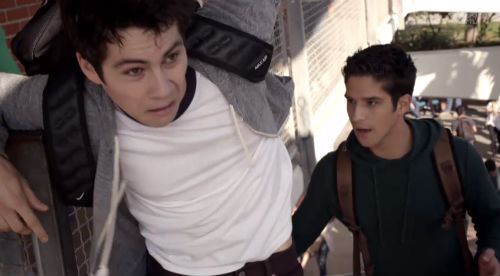 Fans speculate that it’s scratches as a bite in Teen Wolf is a pretty big deal. But no matter what it is that Malia is doing to Stiles’ back, it’s UNWANTED. There is nothing in the exchange between Scott and Stiles that implies that Stiles wants Malia to sneak into his room and presumably mark him in some way. At no moment does Stiles look happy or like a teenager in love. He looks hassled, confused, and a more than a little put off. Like the hook up scene in “Echo House,” viewers are told to accept a relationship in which the exchange of consent is extremely ambiguous. While Stiles does not say he does not want to be physical with Malia (even if it’s just spooning and scratches), he also does not say he does and that is a huge point of contention. After all, the lack of a yes is still a no.

What’s even more troubling is that this isn’t a case of viewers reading too much into a situation. Shelley Hennig, who plays Malia, has said some pretty triggering stuff in interviews about her character. In an interview with TVLine, she said:

Malia’s very aggressive. She’ll physically grab him, and that means she loves him, as opposed to brushing his face with her hands. She’s more likely to punch him; that’s her way of showing love.

Ok, NO. We get that Malia was a coyote for most of her life and we also get that she needs a great deal of time to become adjusted to living life as a human. What we don’t get is why is the writers are insisting on pushing her into a romantic relationship with Stiles so quickly. The above quote is so dangerous in that it implies that violence can be used to express love, which is definitely not even remotely true, even if the perpetrator is apparently unaware that it is wrong. If this is the case with Stalia, then there is nothing romantic or healthy about Stiles and Malia’s relationship.

Even if you like the character of Malia (after all, she is complicated and has the potential for great things), there’s no denying that the majority of fans seem to be against Stiles engaging in a romantic relationship with her.

So, what do you think? Do you think Stalia is a ship worth sailing? Are there other problematic issues with the relationships in Teen Wolf? Do you think the writers even know what they’re doing at this point?

109 thoughts on “There’s Something About Stalia… That’s Problematic”