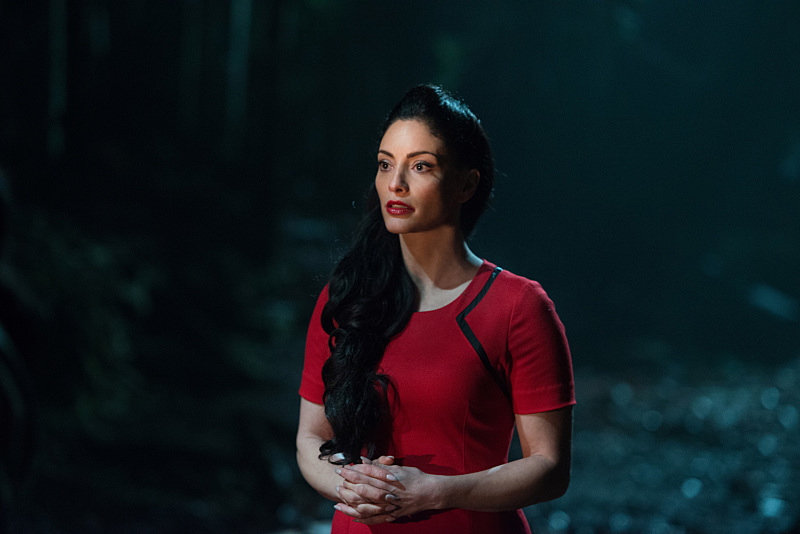 After the insane ups and downs in the past few episodes of The 100, I was surprised at how well “Nevermore” flowed.

I’m not saying I loved every part of “Nevermore”, but it was definitely riddled with tension and a sense of urgency that even the important events going on in Polis and Arkadia haven’t offered so far. I have to say that while a lot of Bellamy and Octavia’s interactions were frustrating, Octavia was awesome while my love for Bellamy wavered a bit throughout this episode. 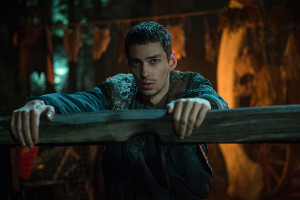 Jasper, on the other hand, was par for the course, at least for most of his screentime in “Nevermore”. I’ve really struggled with how I feel about his character, because while I almost always love him, at times his attachment to Maya – and his subsequent actions and reactions since her death – has been more than a little bit frustrating. But by the end of this episode, I was left feeling a lot better about Jasper…at the expense of what happened with Monty (which I’ll get into later).

The real star of this episode was Lindsey Morgan as Raven. It was almost like something out of The Exorcism, watching her struggle against her bonds and say the worst things possible to her friends, all because A.L.I.E. was in control and would rather torture Raven’s body (and later even attempt to make Raven kill herself) than let go of her puppet. Every scene with Raven was insanely difficult to watch; A.L.I.E.’s control of her was maddening, but Raven’s actions and words were beyond disturbing. And yet they were also riveting – the most riveting part of “Nevermore” – and much of that has to do with Lindsey Morgan’s impeccable acting. 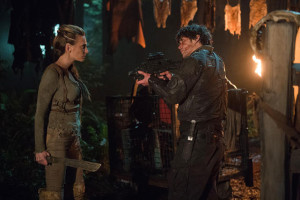 I was also happy to see them bring Niylah back and I loved that she got to play such an important part in this episode while also getting her own little story when she found out that Bellamy was part of the raid that killed the army sent to protect Arkadia – an army that included Niylah’s father. But despite her own desire for revenge, in the end she let Bellamy live, while also doing everything she could to help Clarke help Raven. I do have some concerns about what Niylah is going to do after “Nevermore” – yes, Clarke told her to run, and yes, Niylah mentioned that it was “time for another supply run”…but something about the look on Niylah’s face after Clarke walked out the door made me wonder if she really is just going to disappear. And I have to say that I hope she doesn’t – even if she’s only a recurring guest star now and again, I like the character and would love to learn more about her.

The main plot of “Nevermore” revolved around keeping Raven alive and not letting her figure out where they were keeping her, all while they tried to find a way to send an EMP into Raven’s brain in order to oust A.L.I.E. – and that’s where the beautiful tension and sense of urgency came into play. After several episodes that I simply didn’t care for, “Nevermore” truly brought me back…even with its flaws. One of those being Monty’s story line.

Yes, I’m finally getting to Monty. He and Jasper have been my favorites since the beginning (even when they got on my nerves – I already talked about Jasper, and Monty’s recent involvement with Pike wasn’t all that great, either), so I’m honestly not sure how I feel about what happened to him in “Nevermore”. He and Octavia elected to go to the dropship to get the battery they needed for the EMP, but unfortunately Raven got under Clarke’s skin. Clarke straight up told A.L.I.E. that they were going to “fry” her, and it was the work of moments for A.L.I.E. and Raven to figure out that someone was going to the dropship. Way to go, Clarke, because A.L.I.E. sent Monty’s mother to try to trick him, and when he didn’t fall for it, she attacked him. Octavia tried to come to the rescue, but then Monty’s mother attacked *her*, and in the end Monty was left with a choice – save Octavia by killing his mother, or let Octavia die and then probably be forced to take the chip. 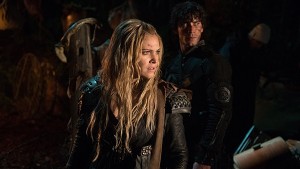 Admittedly, I was still more than a little shocked when Monty killed his mom…and I’m already wringing my hands over what this means for him in the future. Even right after he did it, Monty was already telling himself over and over again that his mom was gone, it wasn’t her. Unfortunately, “Nevermore” culminated with Clarke figuring out that she could remove the A.L.I.E. chip from Raven the same way she’d seen them remove the 2.0 version from Lexa…something that can surely be done for the others who have taken it.

I suppose that the writers are trying to show a dichotomy between Jasper and Monty, considering that Jasper is actually coming around a bit at the end of “Nevermore”, while Monty is clearly breaking down over the fact that he killed his mother when she could have returned to normal with the removal of the chip. But for this to all happen in one episode was somewhat clumsy writing; one of the few low points in what was otherwise a far better chapter to The 100‘s story than we’ve seen in a while.

Despite the fact that Raven’s self-harm scenes were incredibly difficult to watch, and that the “Raven is the darkest part of your conscience” scenes between her and the other characters were somewhat repetitive, overall “Nevermore” kept me on the edge of my seat. This is what I want from The 100, and while I know that it can’t be nonstop action and tension all of the time, this episode proved that there can be flaws without them being seriously harmful to the integrity of both the characters and the plot.

And P.S., how gross was that reddish black goo that seeped out of Raven’s neck? Not to mention the implications of version 2.0 being a solid item versus something that looks like a symptom of a disgusting infection.

What did you think about “Nevermore”? Better than the last few episodes, or not so much? Let us know in the comments!

Previous:Netflix Nabs ‘Daredevil’ Showrunners for ‘Marvel’s The Defenders’
Next: ‘Fear the Walking Dead’ Renewed by AMC For A Third Season!