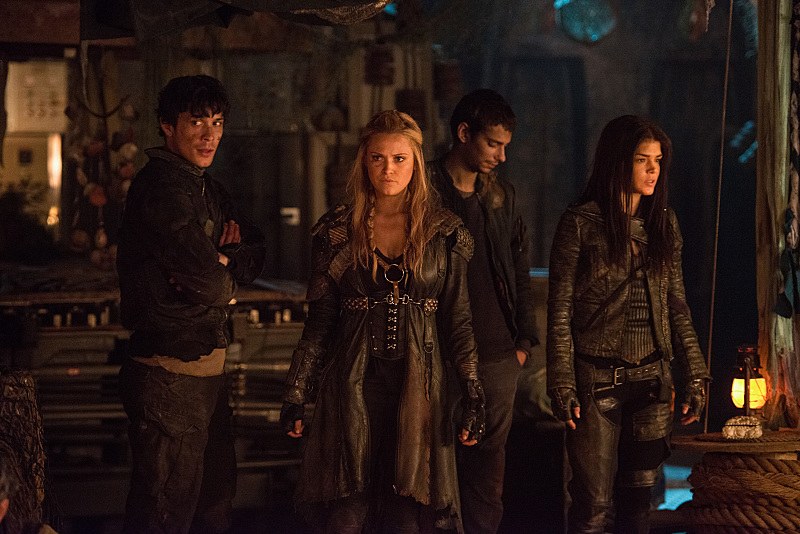 “Red Sky at Morning” chips away at Alie’s plan, but with only two episodes of The 100 left this season, her motivation isn’t being revealed fast enough.

It’s very boring to watch a show where the good guys always win. Likewise, it’s boring – and frustrating – to watch a show where the good guys never win. On a show like The 100, which has adapted the motto “maybe there are no good guys”, it starts to get a little confusing. In “Red Sky at Morning”, there were a few victories, but mostly losses. Monty lost his mother all over again, Raven lost the chance to take Alie down from the inside, and Clarke lost the last nightblood. 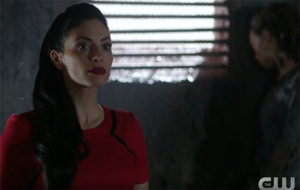 One of the things we learned in “Red Sky at Morning” is that Alie wants the opportunity to speak to Becca, her creator. We also learned that Alie is hiding something, but just like most everything else in the City of Light plotline, we don’t know what it is. We are fourteen episodes into season three, and I am still in the dark as to what Alie ultimately wants. Chipping everyone is her obvious goal, but why? Does this stem from whatever it was that made her blow up the planet in the first place? I’m confused, and I’m getting tired of waiting for the bomb to drop (no pun intended). What is the point of it all?

It’s been a few episodes since Monty was forced to shoot his mother in order to save Octavia, and this is the first time we’ve seen him really confronting what happened. I’ve mentioned the pacing problems with this show before, and this is one of those times where it suffers. We got nearly half a season of Jasper grieving for Maya – it was virtually his entire storyline for the first eight episodes – but Monty’s grief was pushed aside as we delved further into the City of Light, just as his relationship with his mother was sidelined as we dealt with Pike. I love that Christopher Larkin has been given some meatier material, and this episode was heart-wrenching as Monty realized his mother’s mind still existed in some form and he sacrificed her – yet again – in order to save his friends. When it didn’t work, his loss was palpable, but his anger with Raven was misplaced. He needs to come to terms with his guilt and let himself mourn, or he’s going to combust.

Speaking of Monty, was anyone else surprised by the inexplicable coupling between him and Harper? Raven said “finally” when she found them in bed, but I was just scratching my head. Did I completely miss something? 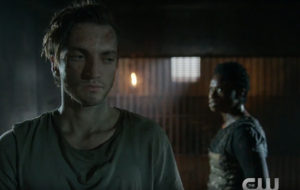 In Polis, Pike, Murphy, and Indra – a strange combination if I ever saw one – have come up with a plan of escape, but there is still a debate about whether they should run or fight. Once Murphy reveals that the power source in Jaha’s backpack may be able to stop Alie, the three of them send the others off and search the temple for the bag. Unfortunately, one of the group gets chipped almost immediately after escaping and tells Alie and Jaha of their plan. They send Emori, who stalls them for a while by telling them that destroying the power source would irradiate the entire city. Like many other things that Alie says, we have no idea if this is true, but it does make them hesitate, and that’s all it takes for Alie to gain the upper hand, as usual.

You know, I honestly never thought there would be a time that I would be rooting for Pike, but he does seem to care about his people, even if he has a horrible, horrible way of showing it. I guess this is what they’ve been getting at all season. I’m still not sure how I feel about it. I wonder what will happen when he inevitably reunites with the rest of the escapees from Arkadia. I’m also interested in what a reunion between Murphy and the others will be like, since none of them have seen each other since sometime last season.

Aboard the oil rig, Clarke continues to be unsuccessful in getting Luna to accept the flame.  Luna recognizes that Clarke’s way leads to violence, and she has renounced violence, which is why she maintains a community in such an isolated location. It’s a little disheartening to realize that Grounder culture is apparently so violent that the only way to escape it completely is to live on a boat in the middle of the ocean. 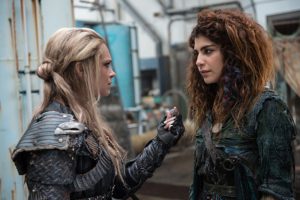 It’s also disheartening to realize that Clarke was willing to force the flame on Luna. Octavia pointed out that even Alie gives people a choice, though really, Alie’s “choice” is usually take the key or she’ll kill someone you love, and that’s really not much of a choice in the end. Still, I’m a little bit disappointed that Clarke (and Bellamy, of course, can’t put the blame entirely on Clarke) were ready to stoop to that level. It’s difficult, when you know what the audience knows, to understand what the characters are feeling. I’m sure Clarke thinks that she has no choice, that Luna accepting the flame is the only way to save everyone, but now that we know Luna sends them away, we can assume that they find another solution. (The kill switch Raven was almost able to hit, perhaps, if they can access it again.)

I will admit that I’m a little letdown by Luna. Oh, don’t get me wrong, she’s an incredible character, but after all of this build-up, to only have her present in two episodes… She could still come back, after all. The season isn’t over, and she may still prove important. As the last nightblood, she may still decide to accept the flame and become the next commander, but if the events of “Red Sky at Morning” couldn’t convince her to join the cause, I shudder to think what it would take to motivate her to do so.

Truth be told, I was a little bored by “Red Sky at Morning”. I think it’s because this City of Light plot has been going on all season and we still know so little about it. There are only two episodes left; let’s see if they can wrap up this storyline in a way that makes this entire season worth it.