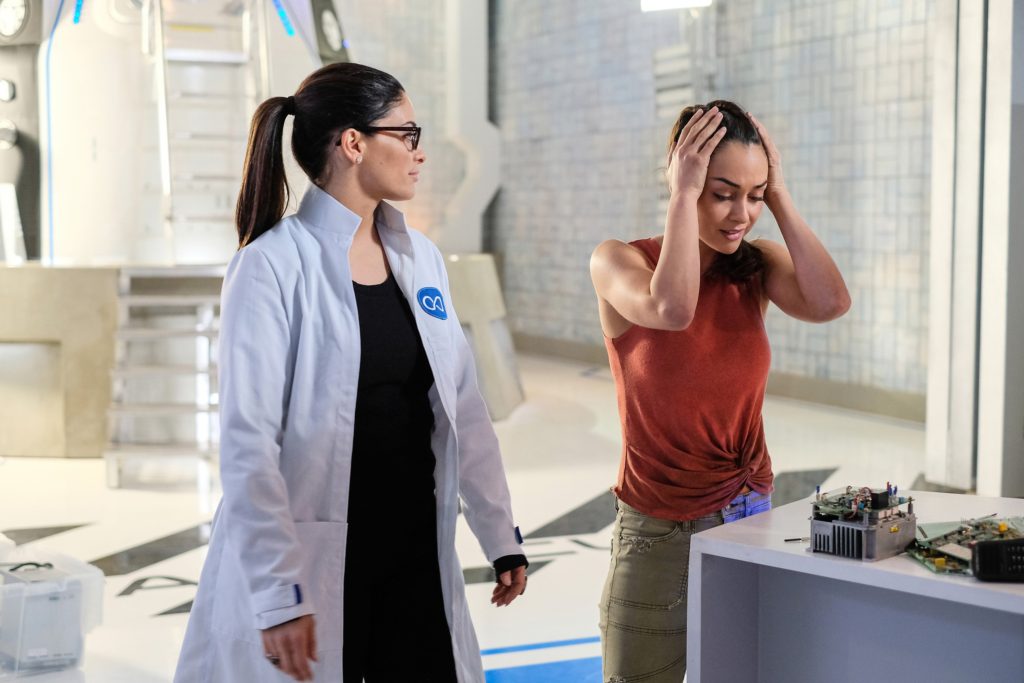 The 100 has never been a very upbeat show, but it’s gotten especially mopey lately, what with the onset of the second apocalypse and everything. While “DNR” dealt with people choosing to die rather than fight, “Die All, Die Merrily” was about people quite literally fighting to survive.

I can understand the concept of “DNR”, and I can even understand the reasoning, but I cannot stand Jasper at the moment, and I haven’t been able to since the end of season 2. He has just been so unlikable, and in this episode particularly, I found him very smug. There’s a bit where he tells his assembled devotees that no one will judge them for opting to go to the bunker, but I very much get the feeling he would have. Harper’s sudden desire to stay behind is somewhat confusing, because she’s generally shown quite a survival instinct. She told Monty she was tired of fighting, and that is very relatable and completely understandable given everything that they’ve been through since coming down to Earth, but Monty was right when he told her she wanted to live.

On the other hand, I totally buy Raven not wanting to go to the bunker. She is in pain every day, she’s dying anyway, and she wants to go out on her own terms. I cannot fathom what it must be like for Raven, who is so brilliant, to be standing at the precipice of literally losing her mind. (Bonus points for Murphy finally apologizing for that whole shooting her thing.) I am upset that so far it seems as though she won’t get to say goodbye to anyone else.

However, all of these people willing to stay behind and die leads me to believe that either they will all change their minds or that Praimfaya isn’t going to be as bad as they’re expecting. Mostly because I think that spending the entirety of season 5 in a bunker is going to be unfeasible, at least with the writers that the show has now, where everything has to be bigger and more doom-tastic. It would allow them to do some serious character development, and it would bring the show back around to the beginning, with everyone trapped in an enclosed space. 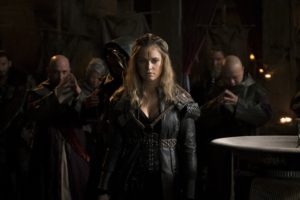 Meanwhile, Skaikru’s alliance with Trikru over the bunker negates their alliance with the Ice Nation and Roan, but the Ice Nation attacks Clarke and the others and takes them prisoner. Clarke attempts to mediate peace, but like all of her other tries, this one is unsuccessful. She goes to Gaia and volunteers to be the next Commander; in the middle of the Ascension Rites, Roan brings Abby in front of the clan representatives and reveals that Clarke’s Nightblood is manufactured and the blood cannot be trusted. Roan and Indra decide that instead of a war, they will hold a final Conclave, and the victor’s clan will be saved.

Naturally, Octavia leaves her experiment with Ilian and returns in the nick of time to be the warrior for Skaikru, because she’s the only person from Arkadia who has even half a chance.

Which leads us into “Die All, Die Merrily”, aka bloodsport death match.

No one in Skaikru is okay with leaving their fate in the hands of such a battle, because this isn’t their culture and they don’t really respect it. Well, when I say “no one”, I really mean Jaha. I’m not saying he doesn’t have a point, but still. They’re outnumbered, and they don’t really have a choice.

Clarke wanted to save everyone, which is why she showed Gaia her Nightblood. She thought that if she could become the Commander, they would have to listen to her and make peace. And as much as I love Clarke, I really appreciated Roan calling her on her crap. I’ve said before that Clarke sometimes needs to realize that she is trying to impose her own beliefs and customs on a completely different culture. She does tend to come across as very “white savior”, believing that she knows best and everyone should follow her. Now, to be fair, she is trying to save as many people as possible, but putting warring factions in an enclosed space for an extended period of time is just a recipe for disaster. 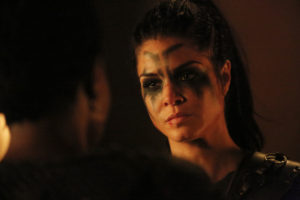 This is really Octavia’s moment. She’s been floundering for the past few episodes, and in “Die All, Die Merrily” she got her chance to shine. I loved her scene with Indra, with Indra admitting that Octavia was her people, as well as all of her scenes with Bellamy. I do wish the show would find more for her to do than just be a warrior; I was excited about her plotline when I heard about at SDCC, but I haven’t been all that impressed with its execution. I miss the relationships she had with the rest of the characters. At least her brief, inexplicable dalliance with Ilian served a purpose, in that if it weren’t for him, she would have been killed by Echo’s arrows. I was not a fan of her…whatever…with Ilian, but she is lost and has been for a long time. Hopefully she will find her way again.

Meanwhile, Roan proved that I was right to like him by banishing Echo for her interference and allying with Octavia in order to stop Luna. Too bad he died. Luna really embodied the spirit of “DNR” throughout “Die All, Die Merrily”. As the last of her clan, she was fighting to make sure that nobody survived, because no one deserved to.

In the end, Octavia is victorious, as everyone should have known that she would be. And as everyone should have realized, she decided that Skaikru alone would not take the bunker – that they would share it. Little did she know, Jaha and Clarke had other plans. And honestly? This made me really dislike Clarke. Yes, she wanted everyone to share the bunker, but she told Roan that it was important that humanity survive, even if it wasn’t her people. I should have known that she wasn’t serious, considering everything she’s done to save Skaikru before. There is a reason, after all, that she is called Wanheda.

What did you guys think of “DNR” and “Die All, Die Merrily”? How do you feel about Clarke’s decision? Are you going to miss Roan and Luna? Do you believe that Praimfaya is coming, or has this all been one giant fakeout?