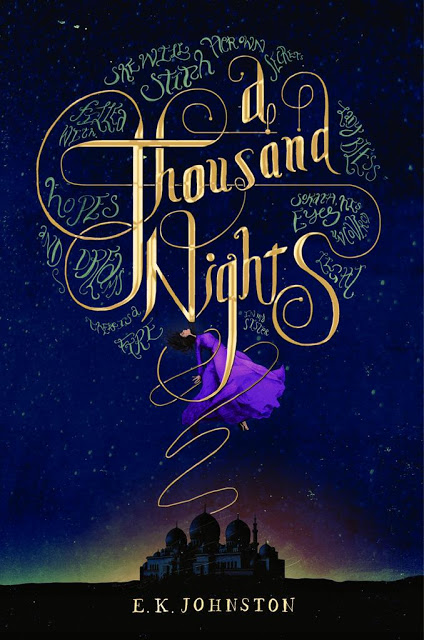 YES. Take notes, everyone, because this book right here is how to do a retelling. This is the kind of quality I was expecting with A Whole New World, and where that book failed, A Thousand Nights delivers. Taking a story like Scheherazade and her One Thousand and One Nights, which has been told and retold so many times it borders on ridiculous, and making it unique is no easy task. Author E.K. Johnston has crafted a beautifully-written story about the bond between sisters that just so happens to feature demons and magic. It bears virtually no resemblance to its origin story, and I was hooked from the very beginning.

A Thousand Nights focuses on the story of Lo-Melkhiin, a larger-than-life king who went into the desert one day and came back changed. He is constantly searching out a new bride, because they have a tendency to die very early into the marriage. Our unnamed heroine (the only named character in the entire book is Lo-Melkhiin) bravely takes her sister’s place as the latest bride and in doing so unknowingly starts a revolution.

This book is sadly a bit short on character growth, but in retrospect, I think that’s intentional for the same reason that none of the characters have names. This is not meant to be a tale about a specific girl but a universal story about any girl. We don’t learn much about our heroine, or her sister, or her family, because this is supposed to be anyone. It just happens to be this girl, is all. Also, the lack of names emphasizes the importance of community. This is a story about the anonymous and the overlooked. Our heroine spends her time among the women of her qasr and the city, and the mysterious magic that she somehow possesses in turn gives power to those who are usually so easily dismissed and ignored.

A Thousand Nights is beautiful, lyrical, slow-moving prose about a girl who uses her wit and her faith to make the best of an unbelievably bad situation and the sister who loves her so much that she helps convince an entire nation to go to war to bring her home. The setting is well-crafted, the imagery is fantastic, and the story is heart-breaking in its simplicity. This was a real treat to read.

A Thousand Nights by E.K. Johnston is published by Disney Hyperion and is currently available wherever books are sold.