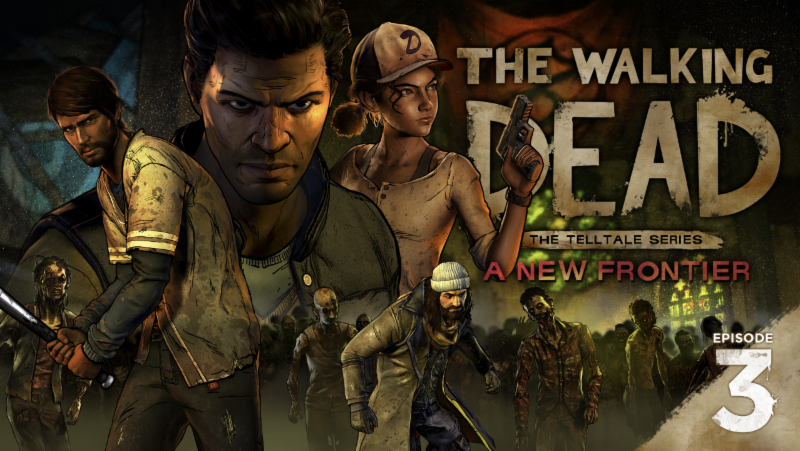 The Walking Dead: The Telltale Series “A New Frontier” Episode 3 “Above The Law” picked up right after the events of Ties that Bind. From there we see Javi trying to protect his family and surviving Richmond.

The ‘evil-survivors-group’ isn’t something new in post-apocalyptics games. However, Telltale does a good job of finding a human connection to make everything intriguing. You know that Richmond is full of murderers but Javi is unable to leave without Kate and Gabe. “Above The Law” had a couple of twists but either they were too surprising or I’ve gotten good at trusting no one while playing such games.

The in-game choices had a larger impact in episode 3. I liked how deciding not to murder two men completely changed the confrontation at the end. When it comes to moldable narratives I want my decisions to matter and I’m glad Telltale did that in “Above The Law”. It also increases the replay value as now I can go back and change my choices for a different outcome during the finale of the episode.

There were two flashbacks in this episode. The first dealt with Javi and Kate deciding to leave their old house and hitting the road with the kids. The sequence helped flesh out Kate as a character and why she insisted on urging Javi to run away with her from Richmond.

The second flashback involved Clementine and how she was kicked out of the New Frontier. I know rules are to be followed but what David did to Clementine and AJ was downright cruel. I even made Clementine spit at David and I have no regrets. He deserved it.

While I’m still iffy about the obvious romantic tension between Javi and Kate I can see why Kate doesn’t want to go back to a marriage that clearly wasn’t working before the walkers came. Now, all I want to know is what made Kate marry David in the first place.

“Above The Law” felt like it was setting up things for an uprising. The way Richmond attacked the other communities is probably not going to sit well with most of its inhabitants. Maybe Javi and Clementine will lead the rebellion? Let’s see.

On another note, Jesus decided to leave. He’s probably going to come back before the story ends; I wanted him to stay. They should’ve given Javi a few interactive option where he could kind of flirt with Jesus or at least make Paul like him more. Sigh!

Have you played The Walking Dead: The Telltale Series “A New Frontier” Episode 3 “Above The Law”? What did you think? Let us know.

Note: I was provided a review copy by Telltale Games.

2 thoughts on “The Walking Dead: The Telltale Series “A New Frontier” Episode 3 “Above The Law” Review”