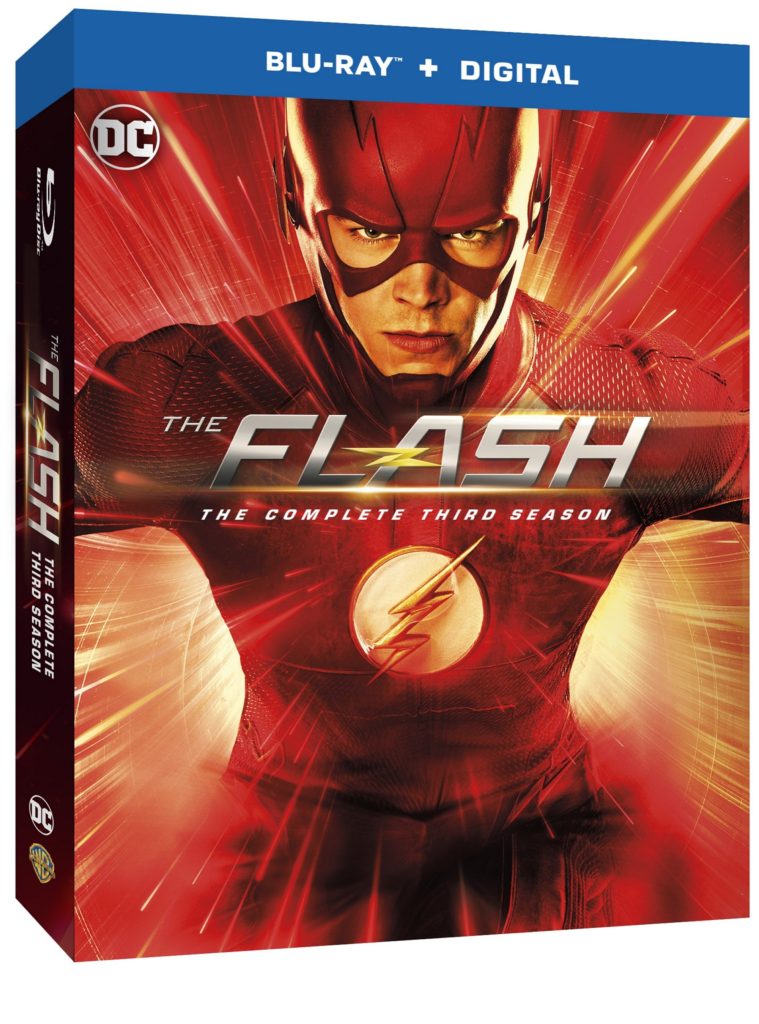 The Flash has found a lot of success when it comes to the superhero universe on The CW. The Flash Season 3 was quite fun to watch. You can go ahead and binge-watch the complete 23-episode season on Blu-ray and DVD on September 5, 2017.

Barry Allen continues to be a hero in his solo series’ third season. There are a lot of evil metahumans to defeat and traveling to alternate universes in The Flash Season 3. For a speedster, Barry does a lot.

The third season was set up by our hero going to the past and saving his mother from being murdered by the Reverse-Flash. However, he has to learn his lesson the hard way when he sees how the world ends up being if his mother isn’t dead. Messing with time isn’t advisable at all.

Barry interfering with time causes the Flashpoint, something that even has an effect on the Legends of Tomorrow and Arrow timelines. Of course, Barry has to fix things. During The Flash Season 3, we’re introduced to a new Wells and going to Earth-1 to face issues. A new villain, named Savitar, is also created due to the timeline being messed up. Our hero also has to deal with visions of Iris being killed.

The Flash Season 3 has a lot of twists and turns that set things up for (a hopefully) interesting Season 4. You should know that the enjoyable Invasion! mega event was also a part of The Flash Season 3.

Struck by the supercharged fallout of a particle accelerator explosion, forensic scientist Barry Allen becomes the fastest man alive:  The Flash!  With his newfound time-warping speed and help from the S.T.A.R. Labs team – Caitlin Snow, Cisco Ramon and Harrison Wells – and his adoptive family, Detective Joe West and Joe’s daughter Iris, the Scarlet Speedster runs circles around other metahumans set on wreaking havoc in Central City, while traveling between alternate universes and protecting our world from otherworldly threats.  Last season, new dangers arrived from a parallel earth known as Earth-2, under the direction of an evil speedster named Zoom.  In Season Three, Barry faces the unknown – as he irrevocably alters the timeline by saving his mother from the clutches of the Reverse-Flash.   The only question now is – as he wrestles with the consequences of his own Flashpoint Paradox, including the wrathful Speed God Savitar – will he be able to find a way out?

Actor Grant Gustin has done an awesome job as Barry Allen. It’ll be interesting to see how Ezra Miller plays the same character in the upcoming Justice League feature film.

Coming to The Flash: The Complete Third Season Blu-ray release, the front has the main artwork. The back has a summary, some images, and details about the extra features. The video is presented in 1080p Full HD Video while the sound is DTS-HD Master Audio for English 5.1.

You won’t experience any video or audio problems with this Blu-ray release. The overall quality is on par with what you can expect from all such Warner Bros. Home Entertainment releases. The Blu-ray set comes with 4 discs as well as a Digital Copy.

The Blu-ray Special Features Include:

If you still haven’t started watching The Flash, there’s still time to catch up. The fourth season will premiere on The CW on October 10, 2017. It is also the network’s top series. Furthermore, Supergirl comes in at second place with Arrow and DC’s Legends of Tomorrow sharing the third spot.

The Flash: The Complete Third Season will be released on Blu-ray and DVD on September 5, 2017, for $54.97 and $49.99 SRP respectively. It is currently available on Digital HD.

Are you a fan of Barry Allen? Have you watched The Flash Season 3? Let us know.