Game of Thrones 5×7 Review: The Gift 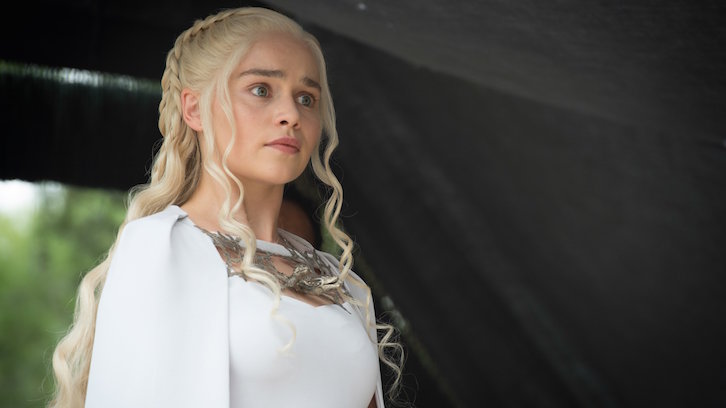 WARNING: Please note that we are including a trigger warning due to this article’s discussion of sexual assault and rape.

I have to admit that even after all the uproar following last week’s episode of Game of Thrones, I hoped that they would at least attempt to redeem themselves in “The Gift”.

Unfortunately, that hope was not realized – not by a long shot.

Although we saw a bit of King’s Landing and Meereen (which I’ll delve into later in this article), most of the episode focused on the North – and yet again, much of what happened was problematic. To begin with, the first thing we see of Sansa is her bruised and broken, begging Theon for help. As if her brutal treatment in last week’s episode wasn’t enough, now she has lost every part of her characterization and strength and merely exists to further Theon’s plot. 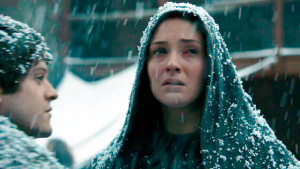 Not only that, but Ramsay had to make comments about Sansa’s looks, and of course kill the old woman who mentioned helping her. Sure, there was a moment when Sansa stood up to Ramsay, reminding him that he was a bastard and even grabbing something that she meant to keep as some sort of weapon – but what does this matter compared to everything else? When compared to the fact that the writers are clearly putting her rescue in Theon’s hands, rather than her own?

As much as Theon deserves character development, it shouldn’t be at the expense of Sansa – especially when it involves the fact that she is clearly yet again being raped, physically abused, and more.

And it’s not like things are going much better elsewhere. Jon left Castle Black to go to Hardhome, and Alliser Thorne was left in charge. I’m not sure if this is lazy or outright bad writing, but Alliser’s response to this situation – including his comment about how Sam was “losing all his friends” – seemed over the top considering the gravity of the situation, and Alliser’s own fairly heroic acts during the battle last season.

It’s easy to assume that all of that is merely for further plot development, however poorly it was done…but on the heels of the brutality Sansa faced last week, we also had to witness Gilly’s near-rape in “The Gift”. Yet again the show used rape as a plot device, and though in this case it was the mere threat of it – Sam and Ghost showed up to “save the day”, after all – the aftermath was perhaps even worse than the threat itself. Because while I have no problem with Gilly and Sam having a sexual relationship, the fact that it happened at this particular time was unnecessary. On top of that, this whole situation overshadowed the very serious – and sad – fact of Maester Aemon’s death. 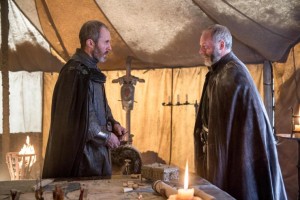 The one positive thing to come out of the Northern story lines was Stannis’ refusal to sacrifice his daughter. That said, I’m still concerned about this situation. It’s clear that Stannis’ army is in a bad spot, and I wonder how long he’ll hold out against Melisandre’s wiles, especially when he remembers the taste of failure from when he last ignored her. 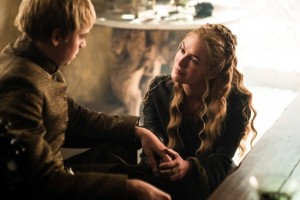 In terms of King’s Landing, it’s obvious that the writers were on one hand trying to make Cersei seem more sympathetic, yet then immediately contradicting themselves. More than anything the scenes between Olenna and the High Sparrow, Cersei and Tommen, and Cersei and Margaery, seemed meant to exist just to move things into place. The Tyrells may appear to be screwed right now, but the show’s version of Littlefinger is still playing his crazy know-it-all games, and as Cersei is currently in the clutches of the Faith, what are the chances of the Lannisters being in power for much longer?

Speaking of Lannisters, Jaime is clearly not in too much trouble in Dorne – he was able to meet with his “niece” Myrcella, while Bronn was, for all intents and purposes, “rotting” in a jail cell. As are the Sand Snakes, by the way, and hey, Tyene poisoned Bronn with her blade! And used her boobs to get him to accept the antidote! Seriously, with as much nudity as we see on Game of Thrones, this was some of the worst. The reasoning, the presentation, everything -there is literally only one direction they could take this plot that would make me agree that this wasn’t just gratuitous.

Things aren’t going any better in Meereen, despite the sweet scene between Dany and Daario. I was pleasantly surprised that Jorah and Tyrion had made it there already, because that’s one plot I wouldn’t want to see dragged out. Unfortunately Dany’s reception of Jorah was bad, and it didn’t appear that his “gift” of Tyrion was enough to excuse him.

On that note, this would have been a great end to the episode, and the fact that “The Gift” was dragged out after its namesake scene was unnecessary at best, bad editing at worst. It’s obvious that this episode was meant to set up what will happen next, but with only three episodes to go, I for one am still seriously concerned about where they’ll take it next.

Previous:Orphan Black 3×6 Review: Certain Agony of the Battlefield
Next: FEELINGS Daily: Hayley Atwell Is Everything