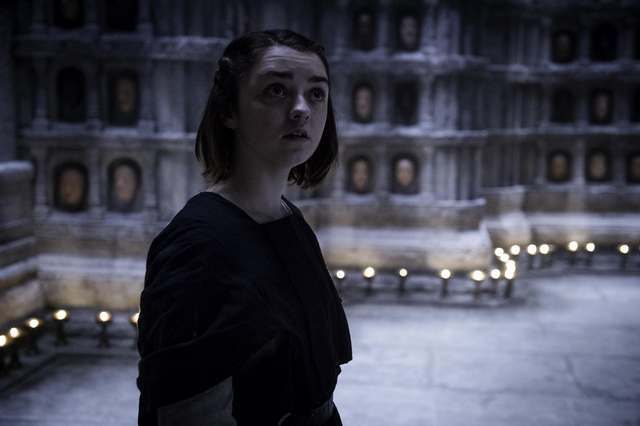 WARNING: Please note that we are including a trigger warning due to this article’s discussion of rape.

It took me quite a while to catch my breath after “Unbowed, Unbent, Unbroken”, and I know I’m not the only one. After last week’s fairly boring episode, it seemed obvious that they would pull out some stops with this one…but I’m still shocked that Game of Thrones took things as far as it did.

But before I get into what happened at the end, there was a lot going on in this episode and not much of it was handled well. Much of Arya’s story seemed drawn out and boring – personally I think that Jaqen calling her out for lying about hating Sandor and that first awesome shot of the room of faces were the only thing that kept her scenes from being total yawn fests. I’m also not quite sure how I feel about the story she told the dying girl, who seemed like she should be old enough to understand why her father was bringing her to the House of Black and White. But as I’ve said before, they’re doing a decent job with Arya, and hopefully they’ll keep that up. 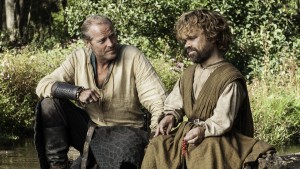 I also think that some of Jorah and Tyrion’s interactions were better than I’d expected; while I couldn’t help but roll my eyes over Tyrion’s “he was fucking the woman I love” comment about Tywin, their conversation about Jeor and his death was actually quite moving. Unfortunately their travels were, as a whole, a bit nonsensical – first wandering through the wilderness and then stumbling upon some slavers who happened to have put ashore. I suppose the best thing I can hope for is that this at least means they’ll be in Meereen soon.

All that said, I think Westeros is actually a bigger mess than Essos right now. As usual Petyr Baelish made it practically from one end of Westeros to the other in record time…only to tell Cersei about Sansa being back in Winterfell? I am so confused about what show!Littlefinger’s end game is that I can only imagine that the writers are confused about it, as well. It’s one thing to create chaos (or whatever lame thing he’s supposed to be doing), but it’s another to consistently undermine every “plan” that you put in place.

After that nonsense, we finally moved on to Dorne. Considering that the title of this episode was “Unbowed, Unbent, Unbroken”, I thought we’d get more Martells and Sand Snakes than we did. Instead we got Jaime and Bronn rolling up into the Water Gardens and even being able to approach Myrcella without any trouble at all…until the Sand Snakes popped up to kidnap Myrcella, that is. What followed was a poorly shot and choreographed fight; the best thing about it was Areo Hotah showing up and putting an end to it.

Now, I did actually enjoy Cersei and Olenna trading words the way they did, but it definitely feels like they are rushing the whole Faith Militant story – not to mention the general weirdness of the private little “holy inquest” and how maddening everything about Loras’ current situation – and everything to do with that Olyvar guy – is. As for Margaery, I can’t tell if they’re doing that thing where they try to downplay how awful Cersei can be, or if we’re supposed to assume that she had more to do with Margaery’s questioning and arrest than it seems. 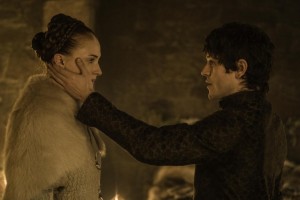 In the end, though, everything I’ve just complained about is small potatoes compared to what’s going on with Sansa. Sure, she had that great moment with Myranda where she said, “I’m Sansa Stark of Winterfell. This is my home, and you can’t frighten me.” But then she actually married Ramsay. And then we had to watch Theon suffer through his man pain to the sounds of Sansa being raped. I honestly don’t know if I’ve ever been so disgusted with any television show as I am with Game of Thrones right now.

Let me first say that I understand there’s a good chance the writers are setting things up for Sansa to take full-on revenge for what’s happened to her family. Let me also say that I don’t care. No amount of revenge-taking on her part could possibly make up for what they did in tonight’s episode. None. And on top of everything else, how could Winterfell not be ruined for her, now? And right after she made that statement to Myranda?

This isn’t the first time I’ve talked about the show’s insanely gratuitous use of rape, nor is it likely to be the last. Yes, it’s a fantasy world that’s loosely based on medieval times. Yes, a lot of the draw with the Song of Ice & Fire series is its grittiness. But I think that at this point, Game of Thrones has simply gone too far, and I for one certainly can’t see them bouncing back from this Sansa/Ramsay Bolton travesty.