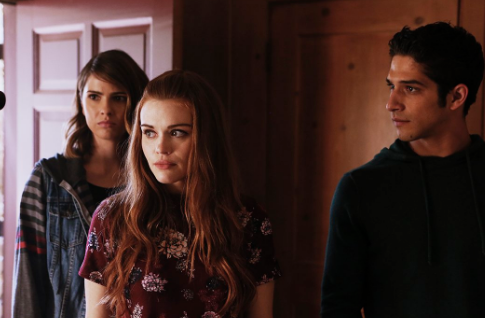 Teen Wolf Season 6A returned after a brief break to give us all a creepy story in “Ghosted”. It also marked the return of an old character.

“Ghosted” opened with Lydia jumping into the memory of a banshee left behind in Canaan. I was expecting a lot more answers from the episode but I guess that isn’t going to happen. I don’t know about you but to me, the Canaan sequences felt drawn out especially because it didn’t add much to the plot.

The only thing we got to learn was that the Ghost Riders can’t take banshees. Why are banshees immune? We don’t know. I mean, what is a banshee anyway at this point? I need an explanation, Teen Wolf. Similar to Corey, banshees have a whole set of powers that seem to appear whenever the plot is in need of them.

As far as the creepy factor goes, “Ghosted” was kind of enjoyable, made so because of the ghost kid. However, Malia feeling sorry about killing her adopted mother and sister felt out of place. I just couldn’t buy it. The current scene would’ve made more sense if they had shown Malia feeling guilt in the previous seasons.

With Scott, Lydia, and Malia visiting Canaan, Liam and Baby Selina Gomez teamed up with Nazi-werewolf to trap the Ghost Riders. Their original plan doesn’t work out properly and Liam decides to bring back Theo. Does Theo coming back make sense? No. At least it allowed the show to mention Kira again. Poor Arden Cho.

The parents also got a bit of story this week even though it was full of faults too. How was Melissa able to mix herbs in the correct manner to save Chris Argent? How does being a nurse (secret doctor) translate into a medicinal Celtic herb mixer? Sigh!

What did Sheriff Stilinski see when he pulled back the wallpaper? Why is he only now looking at Claudia’s medical records? Another sigh!

In the end, “Ghosted” didn’t add much to the plot expect set Lydia up as a potential weapon against the Ghost Riders. Let’s see what happens now that Theo is back.

What did you think of Teen Wolf this week? Did you enjoy “Ghosted”? Let us know.

Previous:New Year, New News: The Walking Dead
Next: Why You Should Support ECHOES by Ayumi