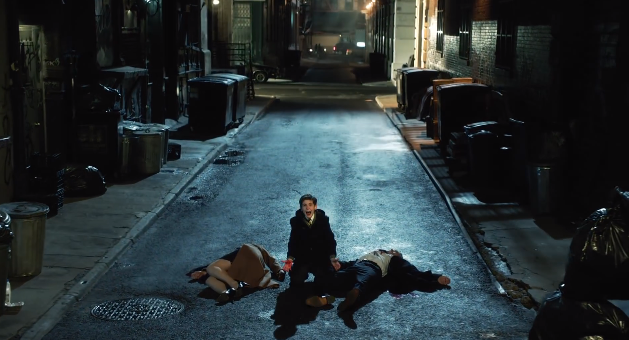 Gotham premiered tonight on Fox amidst much curiosity and anticipation due to intriguing promos and a societal love for all things Batman. While it’s an intriguing premise: a look at the pre-Batman years of Gotham City in which a young Jim Gordon attempts to find the killer of Martha and Thomas Wayne and a tween-Bruce struggles through the violent loss of his parents; the pilot didn’t necessarily offer anything too fresh.

It certainly wasn’t a bad pilot. It simply suffered from a common pilot ailment: trying to cram as much exposition as possible in a short amount of time while still offering a dramatic and suspenseful narrative to pull in viewers. While the pilot didn’t overly impress me, I still plan on tuning in to Gotham because a) I love Batman and b) it gave hints of what could become a thoroughly engaging show.

Gotham kicked off right at the heart of Batman lore: Thomas and Martha Wayne are robbed and shot while walking home with their young son, Bruce after a night out at the theater. Thus kicks off a series of events that include the mob, a malcontented toady named Oswald Cobblepot, a decision by Jim Gordon to clean up the GCPD, the death of the future Poison Ivy’s father, and more. 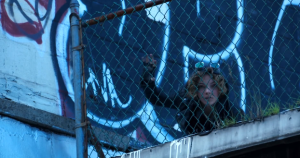 The highlights of the episode included the all-too brief scenes featuring the, as of right now, unnamed Selina Kyle, portrayed here as a wispy street urchin and pickpocket. Though she was only in two short scenes, both of which featured Bruce Wayne, I enjoyed watching her dart in and out of the busy streets of Gotham. I sincerely hope that upcoming episodes focuses more on her because I am more interested in the story of this presumably homeless and surviving young girl than all the criminal underworld storylines.

This may sound a bit odd but I also thoroughly loved the set design of the GCPD building. The gothic and dark interiors reminded me not only of every Batman comic I’ve ever read but also the production designs of the Arkham video games, which to me, are a definitive look at Gotham and the Batman mythos.

Ben McKenzie also did a solid job as a straight-laced and honest cop struggling with both his inherent desire to do the right thing while protecting himself and those he loves. Jim Gordon can easily be portrayed as a one-note character: stoic, grim, and by the books (much like the Dark Knight). McKenzie gave him a bit more humanity and so far, has prevented Gordon from looking like the clichéd good cop.

Donal Logue, as his crooked partner Detective Harvey Bullock, was also one of the strongest actors in the cast and again, played what could’ve been a cliché with a great deal of earnest commitment. I enjoyed watching Bullock and Gordon play off each other and grow to tentatively trust one another, even if they still don’t like one another. I look forward to seeing more of their partnership as the series progresses. 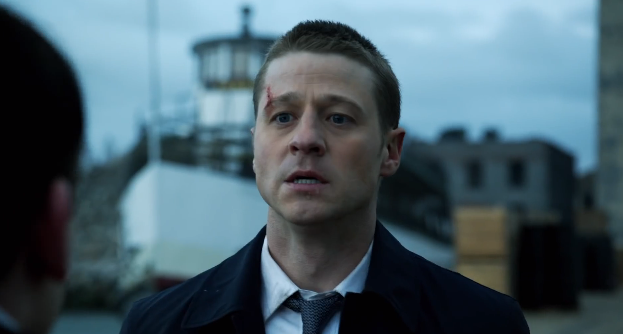 Alfred and Bruce were actually barely in the show, which was fine because this isn’t about Batman. It’s about the city of Gotham and really, what are we supposed to do with a 12-year-old Bruce Wayne anyway? He can stay up in his mansion and stew for a while longer, though the show does seem to imply that Selina Kyle will be making her introduction into his life sooner rather than later.

Other than that, the show’s other characters were decent; there were just no standouts. Cobblepot was creepy, Fish Mooney was sexy and evil, and Renee Montoya (who in the comics, later took on the mantle of the Question, one of my favorite DC characters) was apparently trying to damage Gordon’s career because he stole her girlfriend. Renee is a queer character in the comics, and her tense “he doesn’t know you like I do” scene with Barbara was laden sexual tension.

Overall, nothing really gripped me about the show. There was several jokey winks for comic fans such as, “Meet me at 4th and Grundy,” and a scene in which a mediocre standup auditions for Mooney. Was that dweebish guy supposed to the Joker? Or just a wink to The Killing Joke? I’m not sure but I do know that I absolutely can’t stand it when the Joker is much older than Batman, such as in the Tim Burton Batman film.

I will definitely still be tuning in, as I said earlier, and I have high hopes that the awkwardness of the pilot will not be repeated. I have very high hopes that Gotham could mark the beginning of a new wave of solid comics-inspired programming like the DCAU of the 1990s and early 2000s, though that may simply be a dream.

Did you tune in to the Gotham premiere? Tell us what you thought below!