I’ll be the first to admit that I wasn’t really sure about Gravity Falls after watching the first season, but now that I’ve binged both seasons, I’ve added it to my must-watch cartoons list along with Steven Universe, Polar Bear’s Cafe, Kuroko no Basuke, and more.

Just like most of the cartoons I enjoy, Gravity Falls is a show that is technically meant for kids but is beloved by plenty of adults. The main reason for this is the humor, much of which may go over the heads of younger children because in a way it assumes that those watching it have more life experience than most children under, say, the age of 12 could possibly have. Combined with the fact that season two especially features some pretty freaky situations involving monsters, I found myself thinking at some point in almost every episode that it wasn’t really a kid’s show. 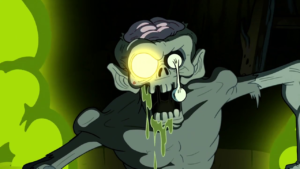 While Gravity Falls certainly wouldn’t be bad for kids – there’s no terrible language or seriously questionable content at all – it is definitely on the scary end of kids’ shows. Still, the characters are well-written, they grow throughout the show, and many of them change for the better by the end. This makes it deeper than so many cartoons that we’ve known in the past, and it’s part of what makes it great for adults to watch, as well.

The main plot involves twelve-year-old twins Dipper and Mabel Pines, who are sent to Gravity Falls, Oregon to stay with their great uncle (a.k.a. Gruncle Stan) for the summer. Gruncle Stan runs the Mystery Shack, which appears to be no more than another fake roadside attraction…but Dipper sets out to find excitement and adventure, and boy, does he – at times, more than he ever could have bargained for.

The first season gets a bit of a slow start; it’s more episodic, and while I enjoyed some of it – mostly anything involving Mabel – it’s season two that really makes Gravity Falls a show worth watching. The pacing picks up, the world building really comes to fruition, and the characters you weren’t sure about more often than not become characters you like – if not downright love. 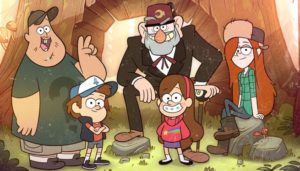 Because all of those characters truly do exist outside of Mabel and Dipper. Most of what we see about them is due to their interactions with the twins, but there are plenty of side notes suggesting or even outright showing their own little adventures. They may seem one-dimensional at the beginning, but the vast majority of them aren’t. And in fact, the town itself is at times a character, but I’ll leave anything about that to the imagination so as to remain spoiler free. 😉

For me, though, it’s Mabel Pines who really makes everything worthwhile. Her twin brother Dipper is (more often than not) the one who drives the plot forward, but Mabel steals the show from beginning to end by making the journey fun, entertaining…worthwhile, even. Her positive attitude could get annoying, but somehow it doesn’t – on the contrary, it’s downright infectious. Between that and the relationship between the twins (which is maybe not a totally realistic portrayal of siblings but is amazingly supportive and encouraging), Gravity Falls just makes you feel good about life…even when it’s freaking you out a bit with child psychics or zombies or giant pterodactyls.

Plus, there’s an adorable pig. Really, what more could you ask for?

All of Gravity Falls is available for streaming on Hulu.