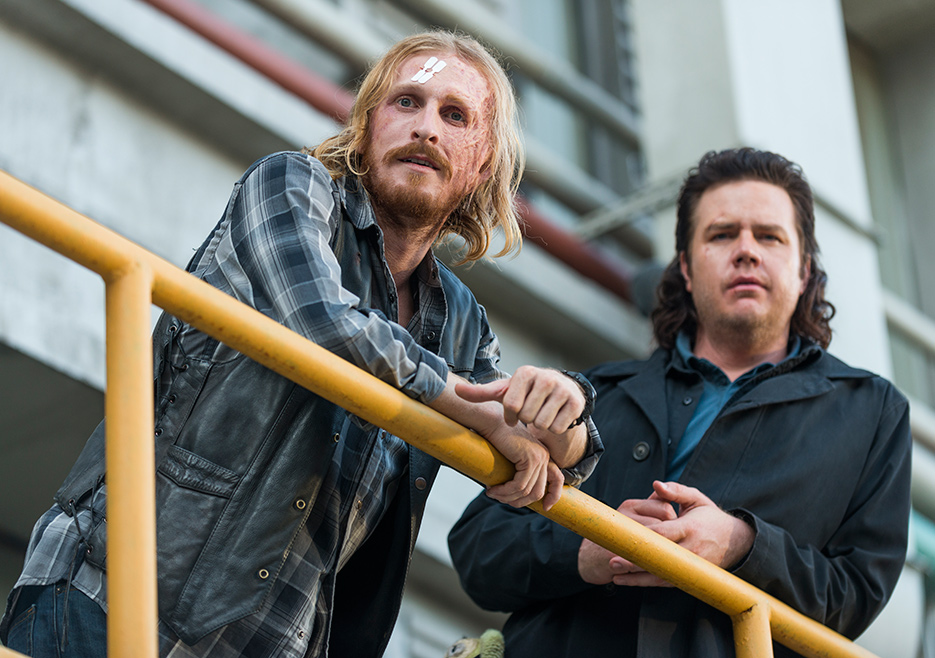 The truth is, it’s really hard to focus on reviewing “Hostiles and Calamities” when it happened the same night as the Oscars, which were at turns frustrating and amazing…whereas this Walking Dead episode was pretty much just the former.

Seriously, I keep hoping that the pace of this season will pick up, and I feel like I’m a little more disappointed every week. While “Hostiles and Calamities” was a small relief – in that it at least focused on showing what was going on with Negan, Dwight, and the rest of the Saviors (now apparently including Eugene, ugh) – I still spent most of the episode waiting for it to be over. 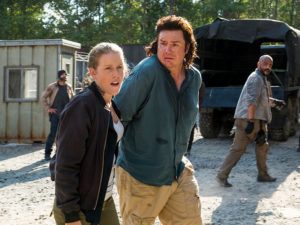 First, were we really supposed to be surprised that Sherry was the one who helped Daryl escape? And what was up with the doctor, who at times seemed to be truly attempting to help Dwight…but then ended up just championing Negan, anyway?

On top of that, I was actually moved (for a minute) by Dwight going to his and Sherry’s old home, being so attached to that cigarette with her lipstick on it, even remembering and leaving her the pretzels and beer that they’d apparently talked about in the past…but then Dwight turned around and framed the doctor for Sherry’s disappearance? Leading to Negan throwing the doctor into the furnace??? I imagine that the writers are trying to say something about Dwight and Negan, here, but I don’t really agree with Eugene’s conclusion that the doctor was more expendable to Negan than Dwight was. In terms of special skills, Dwight is really just some dude, and the doctor was a DOCTOR! 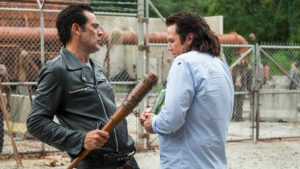 Speaking of Eugene, well…I really hope he’s faking his devotion to Negan. Granted, I’m pretty concerned that isn’t the case, because if he *is* faking it, he’s doing a damn good job. Considering the fact that we know Eugene has one hell of a self-preservation instinct, I’m pretty torn on this whole situation. I want to believe that he’s grown and changed and wouldn’t give in so easily, but while I’ll certainly hold out hope that this is the case, I also won’t be overly surprised if it’s not. Because let’s be real…it would be just like the show to revert all of his character growth.

The thing is, for every moment in “Hostiles and Calamities” that showed us that Negan is a bit unhinged, for every character who proved that not every Savior is 1000% behind him, all of those things were few and far between compared to those who seem if not happy then at least content with the way things are. Was it an interesting glimpse into the daily lives of Negan’s people? Sure. But was it really necessary? That remains to be seen, though at the moment I’m leaning toward ‘no’. Maybe I would have been a bit more interested in this particular story if it had happened earlier in the season, but at this point it’s hard to see any of these “world building” episodes (for lack of a better term) as anything but ways for the writers to drag out an already dragging season.