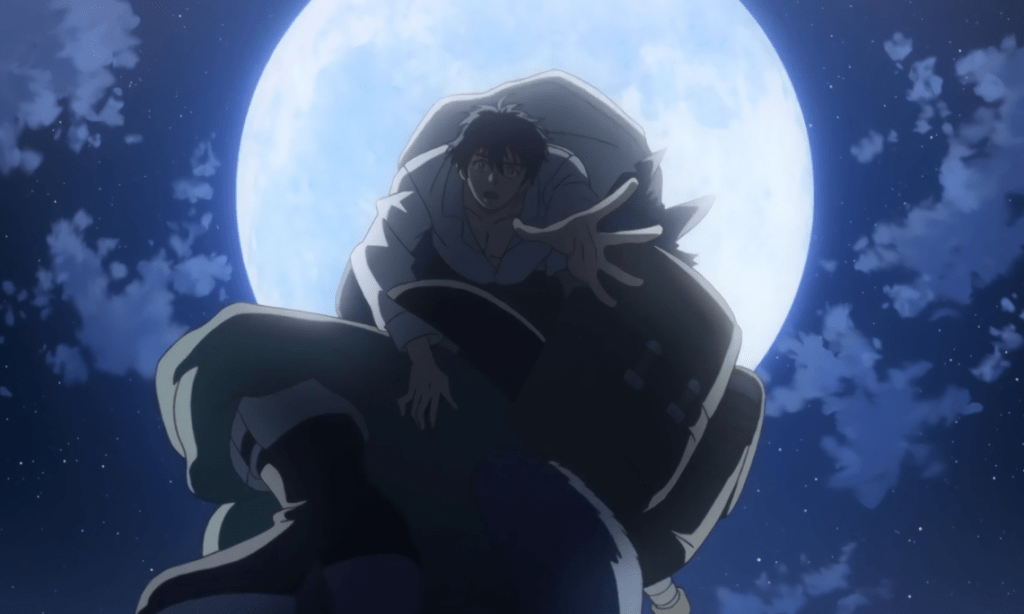 ‘Night of Disaster’ is an episode that will likely divide many fans of The Titan’s Bride. While this anime has been doing a (comparatively) nice job handling consent, the latest episode featured questionable content.

Trigger Warning: This review of ‘Night of Disaster’ talks about consent and sexual assault.

It was clear from the previous episode that Caius and Koichi shouldn’t trust Beri and Baro. However, having no other choice, Caius decided to meet the two to get the Raisa fruit required to treat Koichi’s ailment. Of course, things didn’t work out as planned. While Caius got ambushed by Beri, Baro decided to break into Koichi’s motel room.

I liked how Koichi didn’t allow Baro to walk into the room and steal their belongings. For those who might not remember, Koichi’s a very active young human man. He’s his high school’s star basketball player. So, seeing him being able to attack Baro made sense. Even though Koichi lost the fight, I would like to still give him points for trying. Was it a mistake for Koichi to fight anyone in his incredibly weakened state? Yes. But still, kudos to him for being brave enough to do something.

With Baro deciding to kidnap Koichi, Caius had to deal with fighting his way out of Beri’s ambush. I have no idea why anyone would even want to try fighting a titan like Caius, but I guess greed’s all about making people do crazy things.

The reason why Beri decided to betray Caius made sense. In a way, Caius lying about working for an eccentric elf is what led to said betrayal. Beri decided to take the middle guy (in this case, a titan) out of the equation and directly work with the (fake) eccentric elf looking to pay handsomely for the Raisa fruit.

Now, I have to talk about the problematic part. Even though I put a trigger warning above, I’m going to share a warning again. The scene I’m going to talk about made me highly uncomfortable while reading the manga. I knew it was going to appear in the anime, too. However, the manga shared some context behind the particular scene. So, I can kind of understand why Baro did what he did (even though I didn’t like it).

The anime viewers will have to wait for the upcoming episode to (hopefully) offer an explanation. Without the context from the manga, that scene in ‘Night of Disaster’ was wrong on many levels.

After kidnapping Koichi, Baro took him to a secluded cabin. While trying to figure out if he should sell Koichi, one thing led to another and Koichi fainted because he’s unable to calm down. The Karina poisoning acted up and Baro noticed Koichi’s body getting aroused. As an animalistic being, Baro thought Koichi’s in heat and decided to lend a… well, his tongue to help an unwilling Koichi ‘down there’.

There’s nothing good about that entire scene. Again, the manga offered context to Baro’s decision, giving rise to a question about what different societies meant by the term ‘consent’. Here’s hoping the anime writers offer an explanation as well.

Coming back to what I liked, we got to learn about how Koichi’s mother died. She began working overtime to help run the household after the death of Koichi’s father. She lost her life due to an accident during one of her business meetings. Koichi blamed himself for his mother’s death. That past trauma resurfaced when Koichi learned about Caius being ambushed.

Koichi falling ill due to the Karina fruit is what led to Caius undertaking such a dangerous quest to procure the Raisa fruit. Caius endangered his life for Koichi. The scene where Koichi hallucinated about his hands being covered in Caius’ blood really made it obvious that our young main lead was ready to blame himself if anything happened to the titan.

Feel free to share your thoughts about ‘Night of Disaster’ with us.

Previous:Boruto: Naruto Next Generations 1×161 Review – ‘The Castle of Nightmares’