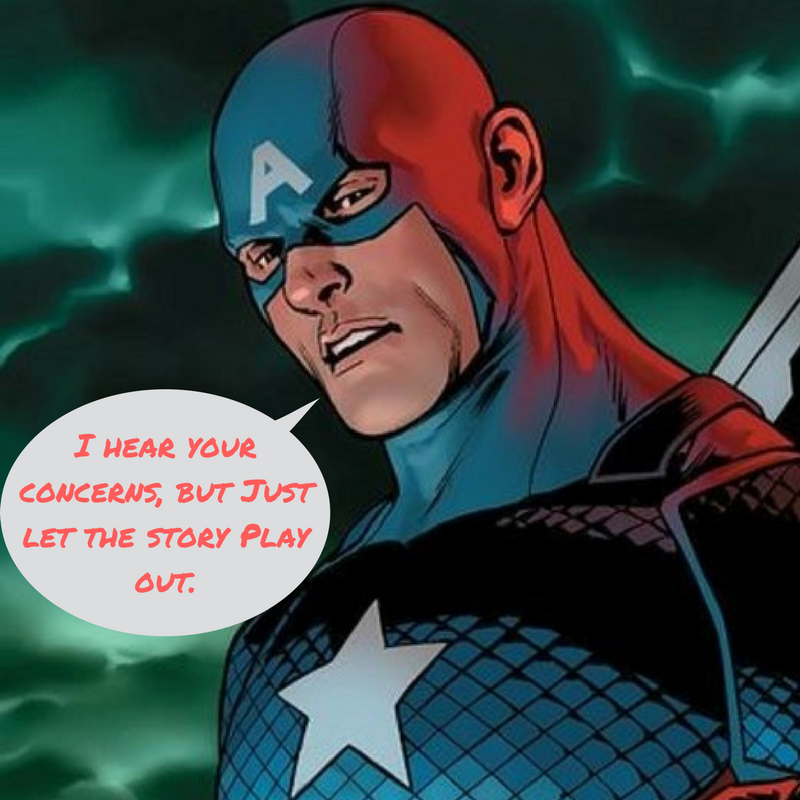 In a statement to fellow Disney family member ABC, Marvel has tried to set fans’ minds at ease about the Hydra Cap storyline. They say they hear the concern but asked that fans “allow the story to play out”.

So, relax, everyone. They totally understand why we’re upset, so go buy Secret Empire #1 tomorrow!

Meanwhile, back in the real world where actions have consequences, the statement from Marvel feels a little lackluster.

With Marvel Comics’ ‘Secret Empire,’ the forces of Hydra have taken over and, due to the villainous actions of the Red Skull, have manipulated Marvel’s greatest hero, Captain America, and forced him to adopt their cause. At Marvel, we want to assure all of our fans that we hear your concerns about aligning Captain America with Hydra and we politely ask you to allow the story to unfold before coming to any conclusion.

Putting aside my own very intense feelings about this storyline, there’s a lot to unpack there. When he appeared at C2E2 last month, Nick Spencer assured fans that Captain America had no way to resist or defend against the timeline manipulation and thus this whole mess isn’t his fault. Marvel’s emphasis of the same sentiment suggests that – despite their protests – they might not actually understand why fans are upset.

They hear us, but they aren’t listening.

For one thing, Captain America sprang from the joint imagination of Joe Simon and Jack Kirby, who were born Hymie Simon and Jacob Kurtzberg. The very first enemies Cap fought were Nazis. Hydra Cap is a slap in the face to these Jewish men who created him in response to the war. Hydra can protest all they want that they aren’t really Nazis, but in the most generous of definitions they’re Nazi confederates and evil like that stains.

There’s also the fact that the way Marvel is going about this destroys the very nature of Captain America. Think about that – if Hydra Cap is the “real Steve Rogers” then our Steve is “Fake Boy Scout Cap”. He was manipulated to be good by desperate heroes. The real Captain America was always a traitor.

Also, Marvel doesn’t seem to realize how badly timed this is. We have actual Nazi sympathizers in positions of power in America right now. I wish I were joking. Our current President isn’t sure why the Civil War happened and thinks we should have been able to “work it out” without an actual war. Having Captain America do a heel turn this hard right now – and the way it’s done, where he’s actually revealing his true colors instead of being brainwashed – is such a tone-deaf decision that I’m staggered.

They’re even going so far as to say that people in the comics think Hydra is doing a good job. Jack-booted thugs may march triumphantly in the streets, but everybody gets fed and the trains run on time. (Extra credit if you understood that reference. It’s topical.)

This story is an example of one of the worst corners of art: when people use art to hurt with no acceptance of responsibility for their actions. Remember when the heel-turn was announced and editor Tom Brevoort said:

The idea of Captain America means something very primal and very strong to the people of this nation, and they have a very visceral reaction when you get to something like that. You want people to feel and react to your story. So far, so good.

Essentially, Marvel is taking the position that this story is okay because it’s so provocative. They couldn’t just do Hydra Cap through a mind control storyline, which wouldn’t destroy the character. They had to pull the roots of goodness from his soul and wrap them around a Lawful Evil alignment, then name that “truth”.

Marvel seems to think the payoff from this is worth it. The statement promises:

What you will see at the end of this journey is that his heart and soul — his core values, not his muscle or his shield — are what save the day against Hydra and will further prove that our heroes will always stand against oppression and show that good will always triumph over evil.

So… we should be patient, because Fake Boy Scout Cap will win over Hydra Cap and continue to lead a life of brainwashed heroism?

You know what? I’m not sure anything can make this okay, but I’ve loved Marvel for a long time. I’ll make this invitation to any Marvel employee who wants to take it: come have a beer with me and explain off the record what this ending is that’s supposed to justify Hydra Cap. If I think it’s a decent justification – just decent, not even inspiring – I will both buy and review every issue of Secret Empire. Pinky swear.

I feel pretty confident that I won’t be buying those comics, though. For one, let’s be honest with ourselves. No one at Marvel reads this website. For another, I can imagine legitimately one way for this to work out and there’s no way Marvel would go for it.

But I’ll be watching my e-mail anyway.

What do you think about Marvel’s statement? Do you think it’s enough to get you reading this story, or are you still pretending Captain and Miss Marvel are the only characters in the verse right now? Share your thoughts in the comment section below!