Storm #10 Review: The Past Returns! 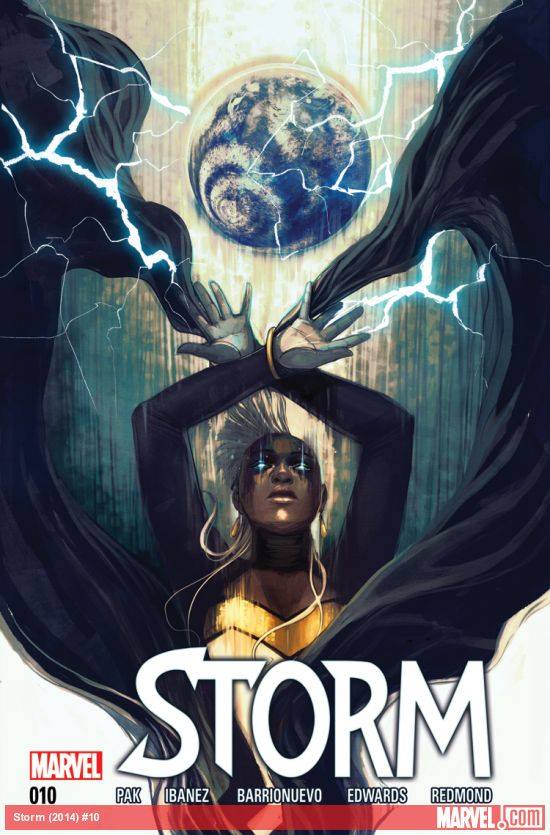 This month’s issue of Storm began the final arc for the Weather Goddess’s solo-series. It linked to every character Ororo helped since her solo’s debut, and the revelation of the final antagonist really took me by surprise.

I know some fans have said that the issues focusing on Callisto and Forge didn’t do Storm’s solo any favors. I agree with them because those two issues read like stand-alone stories. They didn’t give a sense about what writer Greg Pak was trying to accomplish. But as the series continued, everything took shape. Storm helping Callisto and Forge ended up becoming important arcs in her journey. The villain that appeared in Storm #10 had kept an eye on everyone Storm had helped and launched an attack against all of them simultaneously.

Greg Pak did wonderful work showing Storm trying to deal with her inability to be everywhere at once. She had to help Callisto in New York, Marisol in Mexico, and Forge in Kenya, but she couldn’t. I was half expecting her to change the weather in those areas to offer some support, something she did in Worlds Apart. Maybe she’ll do it later on the series but for now she decided to attack the core of the problem. 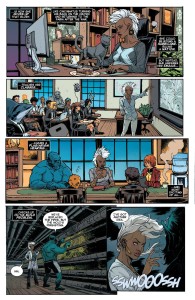 Victor Ibanez returned to the art, and I couldn’t be happier about it! He joined fellow pencilers Al Barrionueve and Neil Edwards for this issue. Not only did Ibanez show us a determined Storm, he also gave the character a more humane look by showing her fulfilling her normal duties as a headmistress. I loved how her everyday clothes changed in the panels where she replied to her emails, taught her classes, and looked over a plagiarism case. He even showed her eating a sandwich. How many comic books are there that actually show heroes eating something?

Ibanez’s art really gives the Storm solo series an individual look, and the way he draws Storm is the best I’ve seen in years. I was also very impressed by the opening pages of the issue, which had appearances by a lot of mutant students. Speaking of art, this month’s cover by Stephanie Hans was great as usual. She can do no wrong!

Coming to the surprise villain in the story, I was not expecting Kenji to show up. He narrated the beginning of the issue and the moment he started to talk about art I knew it was him. For those of you who don’t know, Kenji was one of the new mutant characters introduced in the comic book world because of Hope Summers. He ended up becoming a murderous psychopath and was killed. I would recommend reading Generation Hope to get a sense of Kenji’s creepy personality.

I’m looking forward to the conclusion of the series and how Storm deals with Kenji, who is out for blood. Storm will be ending its run with issue 12 because of Secret Wars. Will it come back after the major Marvel event? I do hope so, because fans have been very passionate about the series, and fingers crossed Marvel takes that into account and continues with Ororo’s solo. We all need a POC superhero like her in the comic book world.

Have you read Storm #10 yet? What did you think of the art? Did Kenji’s return surprise you? Let us know!

Previous:FEELINGS Daily: What Is the Deal with Marvel Right Now?
Next: Dear Geekiary: Will you guys be watching Jurassic World?