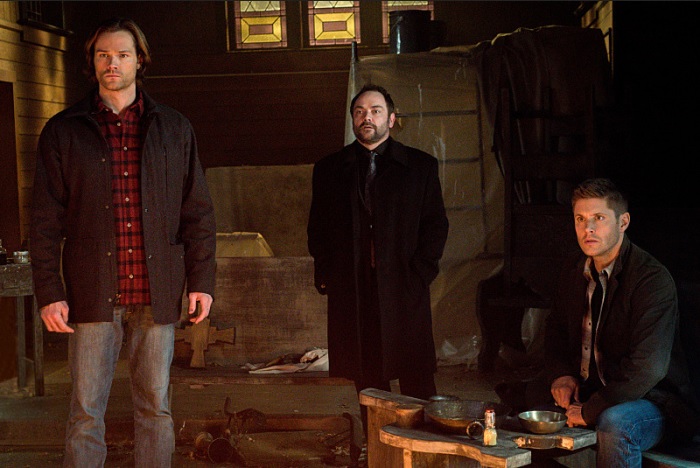 When I heard that the writers for “Hell’s Angel” were the writing duo of Eugenie Ross-Leming and Brad Buckner, I was concerned.

Their episodes tend to be rather uneven in pacing and plot, with significant continuity errors. They also have a tendency to sacrifice likeability of the characters in order to fit whatever story they’ve shoe-horned into the episode.

“Hell’s Angel” rather surprised me, however. The episode was compelling and most of the characters came across very well. There was even a nice surprise in the episode. There were a few issues with continuity and story construction, but overall, the duo did much better then they have in the past.

One of the interesting things about the episode was that the same issue was shared by virtually every character shown on screen. Everyone, from the angel double-checking the individual heaven doors to Lucifer himself, overestimated the possibility of their personal plan of action succeeding. Each one was tested, but each failed. So far, only Amara’s plan to punish and kill God is untested. Will her testing occur in the last set of episodes this season? Will she succeed or fail?

Dean spent the episode agreeing with the plan to pit Lucifer against Amara, while pushing to switch him from Castiel to another body due to great concern about Cas’s welfare and safety in the upcoming fights. Sam, however, wants to “respect his choice” and let Lucifer continue to use Cas as his vessel, regardless of what happens during the fight. While this doesn’t seem very in-character for Sam, I understood what they were trying to do.

In the past seasons, whenever Sam has made a choice to sacrifice himself to save the world, Dean has tended to react badly. His attempts to save Sam usually backfire and make matters worse, while simultaneously pushing Sam back into the “little brother” role he’s tried to escape for most of the series. Sam’s attempts to save Dean in similar situations don’t really end up any better. Sam’s viewpoint of whether or not they should remove Lucifer is as much driven by these events and how they made him feel as his concern over what Cas wanted. Both brothers are driven by their feelings, but Sam is driven by concern over Cas’s feelings of usefulness, while Dean is more concerned over his feelings of exclusion.

One thing that stood out to me was the remarkably hypocritical behavior of Lucifer. The archangel spent the whole of season 5 trying to take over all of Heaven and Earth. He occupies himself with renewed attempts to take over the throne of Heaven this season. He even tries to get the other angels to call him God. Yet, he’s incensed by the fact that Crowley followed his legendary example and took over Hell since the end of the Apocalypse.

Both characters share many similarities. Both acted out when they viewed their only known parent as ignoring them in favor of a shiny new toy. Both like to twist how people see events for their own gain, and who love to push forward a highly selective version of their history as the official story. We’ve seen how Crowley reacts to his mother, so considering the similarities, it would be interesting to see how Lucifer would react to a face-to-face.

On a side note, why does every angel egomaniac want to call himself God in some way? Raphael, Metatron, Lucifer, even Cas at one point. Design flaw? Or a built-in succession plan? 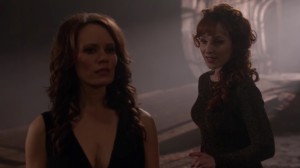 The return of Rowena was a delightful surprise. The death of such a strong female character was one of the big issues this season, so it’s good to see they decided they were a bit hasty and brought her back. Her method of return also fit her character. A lady with her background of survival from frequent betrayal would have taken whatever precautions she could, and it’s good that she didn’t abandon her instincts while working with one of her personal idols.

Her attempt to manipulate Amara was interesting, both in the fact that she thought she could manage it and that it didn’t work. She showed signs of great fear when she discovered that Amara was resistant, and the show of power clearly spooked her. Rowena has as strong a self-preservation instinct as her son, and as often as he turns up, I’m sure we’ll see her again before too long. 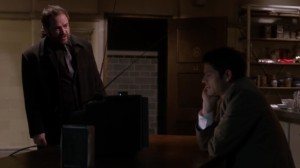 The sequence inside Cas’s head was done in a fascinating way. Although at first it seemed as though the TV was merely a cute way to underline Cas’s disinterest in the outside world, if you listened carefully, the TV seemed to add to the conversation. At one point, you can hear a station ID mentioning “This is You-TV” and a news program with a news story describing the fact that “Lucifer was bored today…”. When Crowley realizes Cas is messed up mentally, a bell goes off. When Cas realizes he saw Dean and asks about him, the program on the TV starts shouting. It injected a hint of the subconscious into the scene, and was a great way to point to the fact that the sequence occurs inside a character’s head. Cas might be depressed and apathetic, but part of him is still fighting back.

The fact that Cas’s happy safe place is the kitchen of the Bunker was heart-wrenching. Kitchens are usually described as the heart of a home, so that means Cas is mentally spending all of his time in what is essentially the heart of the one place where he’s felt the safest in recent seasons. Cas has found himself a new adopted family, in the home of the only friends he has left. The kitchen of the Bunker is most commonly associated with Dean, as well, which likely influences the choice in location. Everyone knows that the fastest way to get to Cas is to involve Dean, a fact that Crowley tries to use to leverage Cas into doing what he wanted. 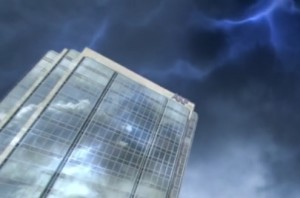 A special shout-out to the special effects department for their work in this episode. The attack in Heaven and the events in the church were very well done, and I appreciated the inclusion of the “Always Keep Fighting” (AKF) acronym on the building in the shots of the sky during the after-effects of the attack on Heaven.

There were a few issues. The one that stood out the most was the final scene with the Winchesters. Dean spends the entire scene doing exposition, something that isn’t needed if the episode is written with the motto of “show, not tell” in mind. Hopefully, they can improve on that next episode.

The other errors were issues with continuity. Amara refers Lucifer as the oldest of God’s children, but in “Changing Channels”, Gabriel says that Lucifer is younger then Michael. Lucifer also stated this himself in “Abandon All Hope…“. The other issue was a matter of consistency. Holy fire has in the past successfully contained both the archangels Gabriel and Raphael, but this season, it’s not enough for Lucifer? Why? And why only in the episodes written by this pair?

“Hell’s Angel” wasn’t perfect, by any stretch of the imagination. However, compared to Ross-Leming and Buckner’s usual fare, it was a vast improvement. I’m always pleased when the writers on Supernatural improve, and I look forward to seeing further improvements for this duo as things develop.

Previous:Marvel’s ‘Cloak and Dagger’ Finds Home at Freeform! Will It Be Too Stereotypical?
Next: New ‘Penny Dreadful’ Trailer is Dark and Full of Terrors