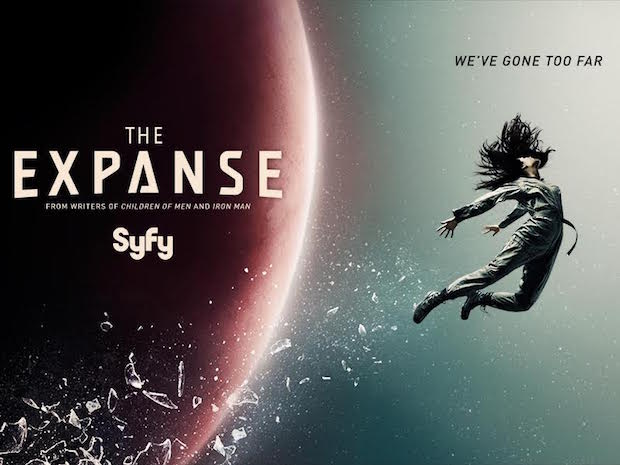 I have to admit that I do not do well with television shows set in space. I generally find them too unrealistic and I begin to panic about things that they never address, like claustrophobia or seasonal affective disorder (I really worry about these people of the future!). Throughout my years of really wanting to enjoy science fiction, the exceptions to the rule for me come when there is a strong focus on a great plot–one that can defy the space setting and just have a really great story and be super engrossing. Syfy’s The Expanse definitely has the potential to be one of those amazing shows.

WARNING: There are spoilers ahead for the pilot episode of The Expanse

Part of the reason that the plot is so successful for this show is that it is based on a series of books by James S. A. Corey. Adaptations usually do well because there is strong source material and an already fleshed-out universe. This definitely shows in the pilot because even as we have no idea who these characters are, they are immediately fascinating. We also get a bit of background info on the setting because it does take place two hundred years in the future.

The opening scene of “Dulcinea” is truly chilling, and that is where we meet our first main character, Julie Mao. We find her waking up alone in a ship. As she 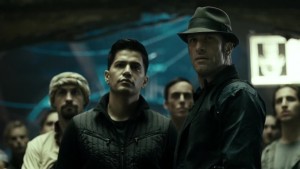 searches for clues on what happened to the rest of the crew, she finds them being devoured by some sort of blue energy. I can think of very few more terrifying things in life than to wake up alone in the middle of nowhere along with the thing that killed all of your companions. Unfortunately, we don’t get much more of Julie in this episode, but I am intrigued to find out more about her story!

Julie’s background brings us to the second story line and introduces us to Ceres, one of the locations that humans have migrated to in our own Solar System’s asteroid belt. There we meet our main protagonist, Joe Miller, a detective played by Thomas Jane. Miller clearly has a bit of a mysterious past hinted at by his interactions with various “belters” and it seems that he wants to do right by representing those that live in the Belt. He is tasked with locating Julie Mao by her parents, who are wealthy and powerful. They don’t know where she is, and it up to Miller to find her and send her home. 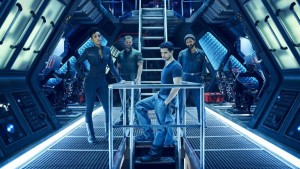 Although Miller is a key player in the series, I didn’t start getting truly excited until we were introduced to the crew of the Canterbury, a freighter ship in the middle of nowhere (and conveniently near Julie’s abandoned ship). A reluctant acting executive officer Jim Holden leads a small crew to investigate Julie’s ship after coming across a transmitted distress call. This crew is really where I felt that this pilot found its legs. Holden is played by Steven Strait, and his nuanced portrayal of a man just trying to do good is completely believable. The chemistry of the crew is also great, and felt completely natural–they are truly being forced into a no-win situation by doing the right thing. It is a bit hear-wrenching to watch, especially as their parent ship gets destroyed by a stealth military ship (under the control of Mars).

The final player in the potential war between the Belt and Mars is Earth, now controlled by the U.N. Earth has clearly become the peace-keeper in our planetary system, and based on our introduction to Chrisjen Avasarala, will go to great lengths for intelligence about what is going on in the rest of the system. It is refreshing to see an older woman in a dominant role like this, where in one scene she is having fun with her grandso 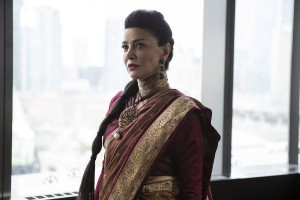 n, and in the next, throwing orders for torture. It is the sort of character that we do not see often, but Shohreh Aghdashloo is a capable and recognizable actress that will make viewers want to learn more about her. All three of these stories are intertwined, and I cannot wait to see how they all fit together.

Going back to that space setting, I have to say that the visuals in this show are stunning. Sure, we have seen spaceships before, but the visual effects here are great–they are very realistic and it is hard to tell what is set and what is computer-generated which is really what science fiction should be. And remember how I worry about our human cousins in the future being healthy? Well, the series tackles a lot of those issues, too, from boots that keep the characters grounded, to how traveling at high speeds through space requires the use of a mouth guard. Little details like that make it more realistic and accessible to me, and that is what I have struggled with in the past when trying to legitimately enjoy the genre. I should also mention that the writers of the book are also producers of the show, so hopefully we will continue to see special details throughout the series. 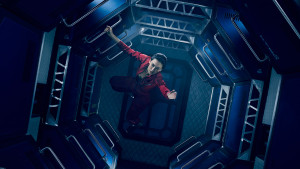 pace setting and that they share a network. Unfortunately, I think this hurts both series. Of course they do have similar settings and most of the stories surround political discord, but they truly are completely different with strong contrasts in their tone and message. The Expanse clearly deals with the preservation of humanity and the obstacles that each society faces by being split among different locations in the Solar System. There isn’t one easy threat like the Cylons–it is truly each other.

Overall, I was impressed by the pilot episode of The Expanse. I was a little nervous about not liking it, but literally the first thing out of my mouth at the end was, “That was intense.” But intense in a good way…like I want to see more, now!

The Expanse premieres Monday, December 14 on Syfy with the second episode airing Tuesday, December 15. The series will continue to air on Tuesdays.