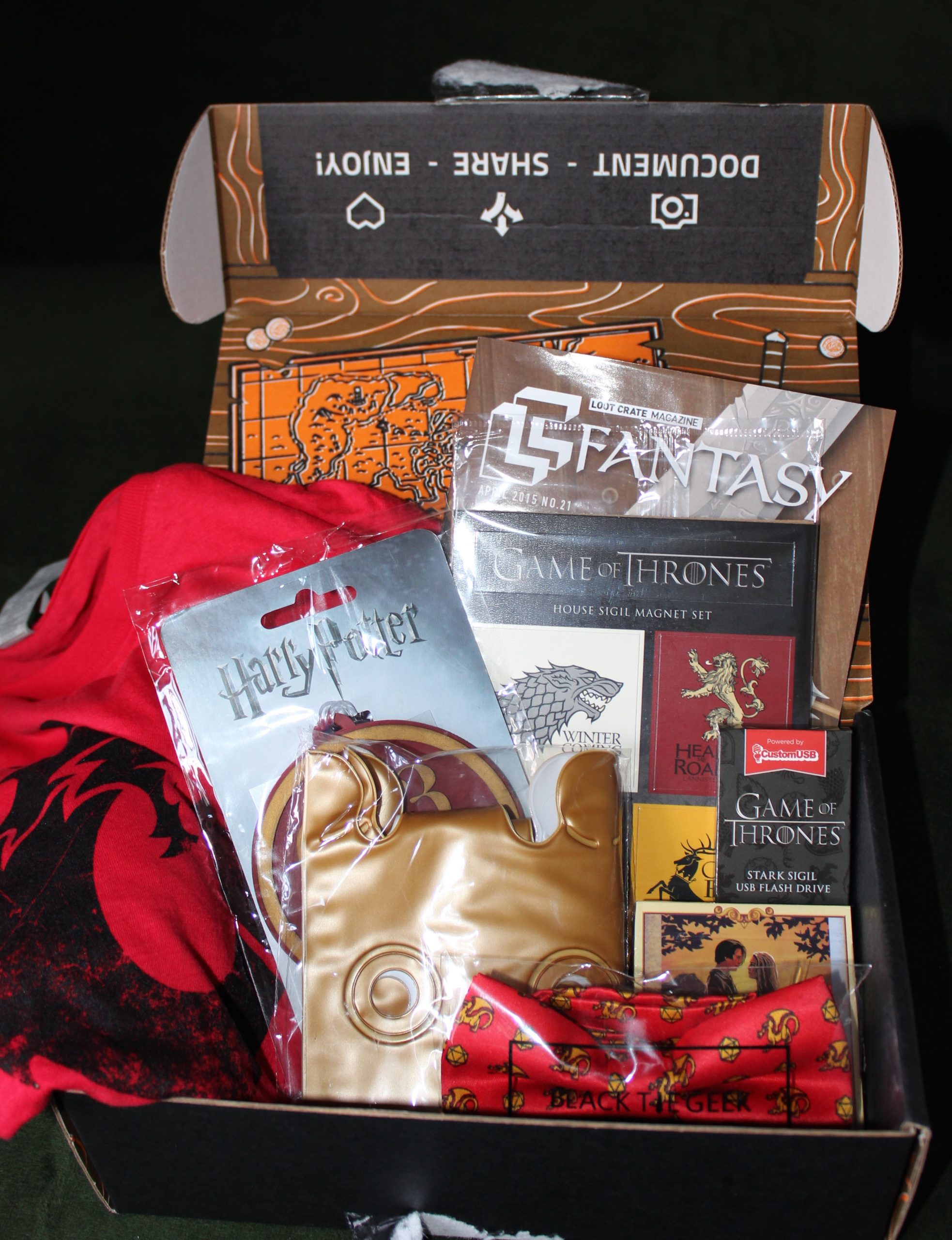 The theme of April’s Loot Crate is Fantasy. So you better get ready to swash some buckles and dust off your magic wand!

Firstly, I have to be honest, fantasy isn’t really in my wheelhouse. Yes, I’ve seen some of the classics films, but a lot of it is lost on me. Thankfully, I know a few geeks who are up to snuff on these kinds of things. 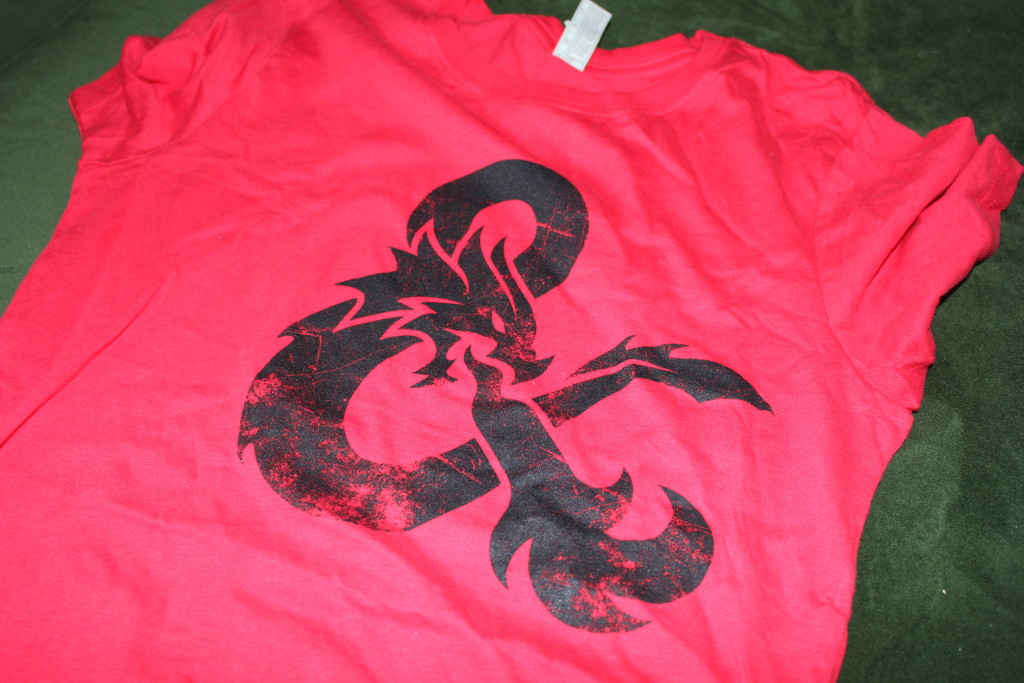 Just like last month, there was another t-shirt included in the box. This time, it was a D&D shirt collaboration from Wizards of the West Coast and Loot Crate Labs. I’ve never played Dungeons & Dragons, only witnessed it from watching Community and listening to Harmontown, but I think that this shirt might make me just cool enough to try it. 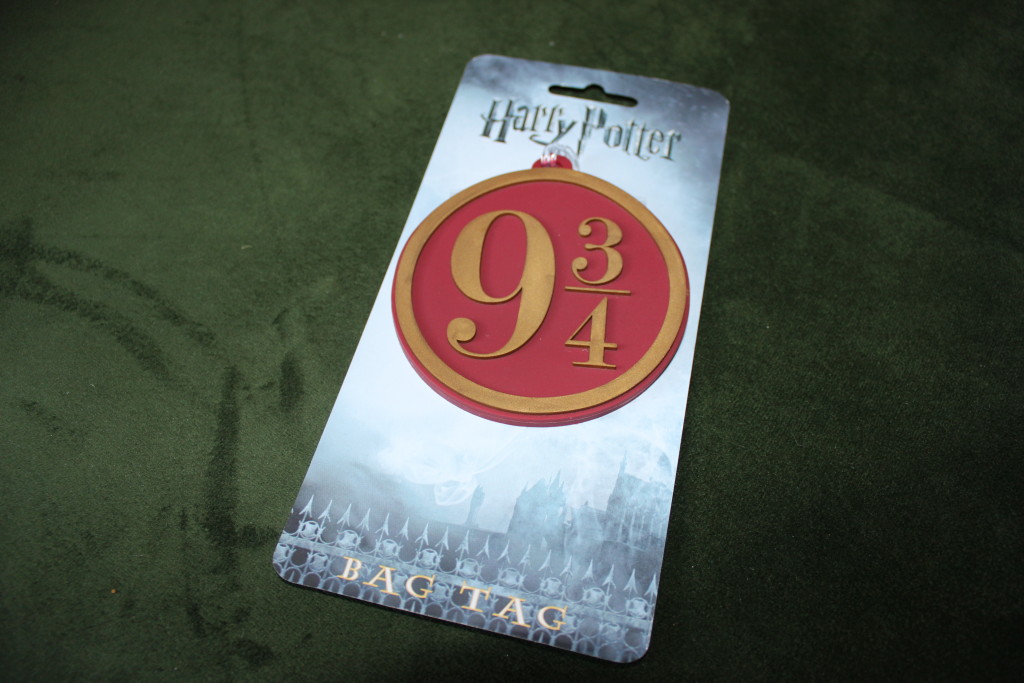 The next item in the box is a Harry Potter luggage tag (from Bioworld). This is probably fate, as I’m currently packing for C2E2, and have a host of conventions that I’ve to travel for this year. I actually needed one! (Granted I’m not a fan of flying, Dean Winchester and I feel the same way on this, and many other subjects.) The tag is quite durable and big enough to spot on the conveyer belt in the baggage claim area. There is also a little clear window on the back to write your info. 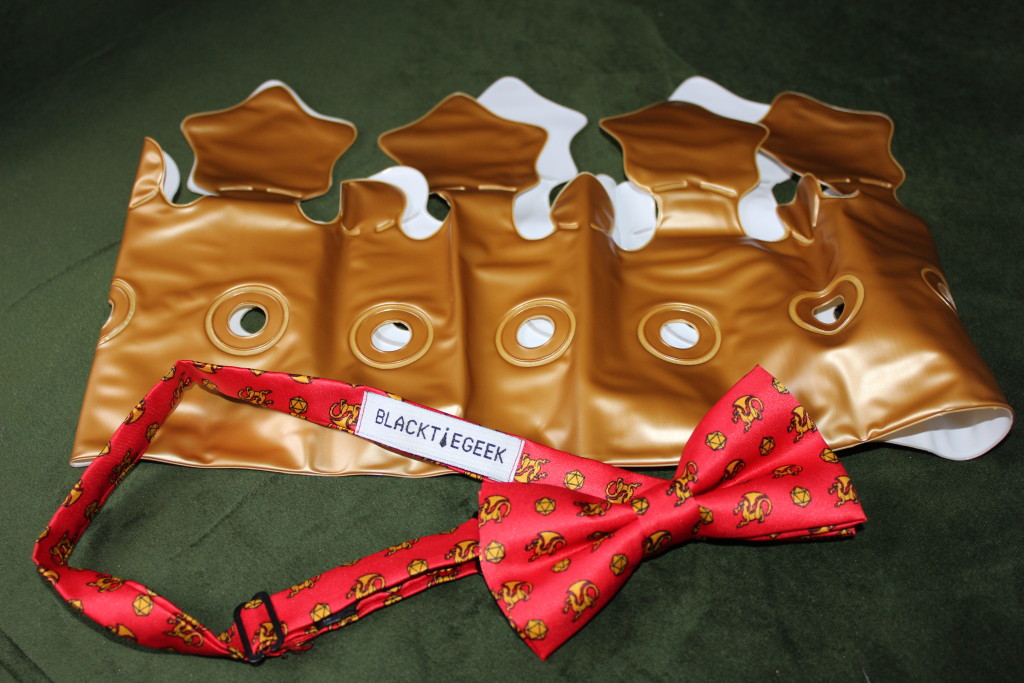 Two items included in this month’s box are perfect for cosplay, or at least a geeky night out. The inflatable gold crown (from Loot Crate Labs) is worthy of a King or Queen of Moondor and the RPG Bow Tie can double as a hair bow, if you’re so inclined. The tie (from Spotted & Tied) has little dragons and multi-sided dice on it. Adorable. 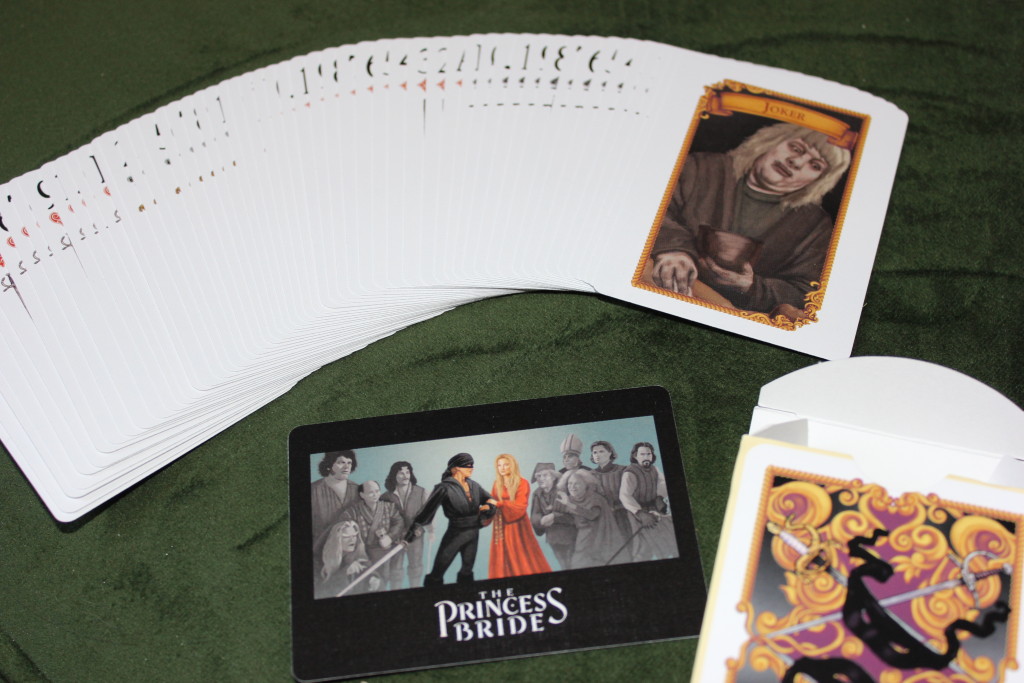 The next piece of loot is a pack of The Princess Bride playing cards (from Albino Dragon). They are really lovely. Each of the face cards and jokers have characters from the film. Westley (as the Dread Pirate Roberts) graces the king of hearts, while Princess Buttercup is the queen of diamonds. It’s inconceivable how much detail is put into these cards. 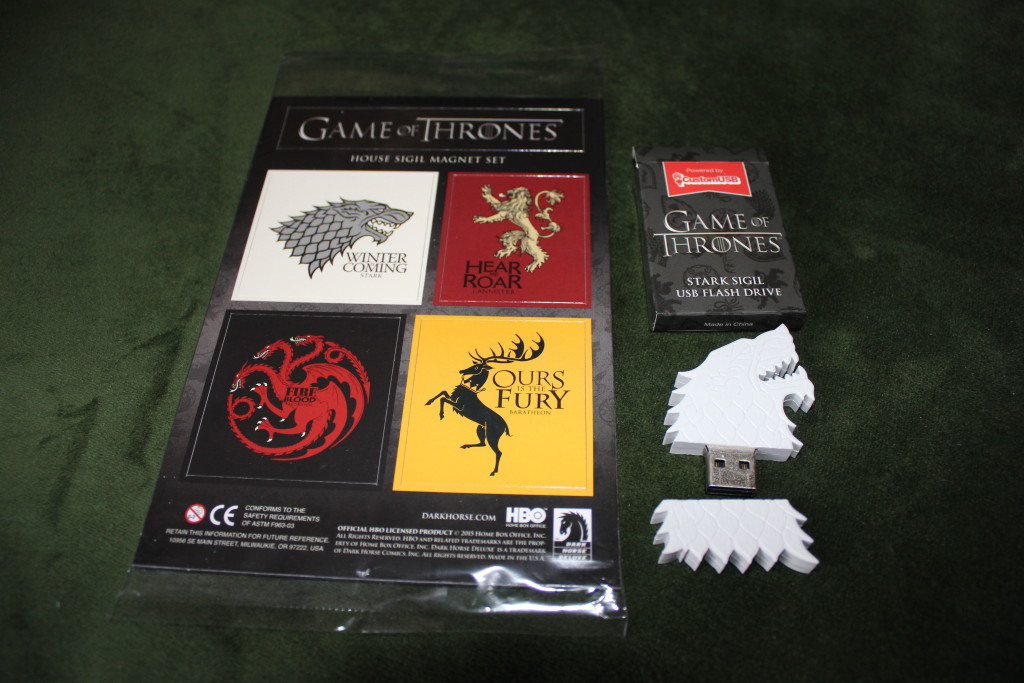 There are also two pieces of Game of Thrones swag. One is an exclusive (to Loot Crate) 4GB USDB flash drive (from CustomUSB) in the shape of the Stark Sigil. I’m told it’s a Direwolf. I’m also told that they make great pets. I’m further told that I should watch Game of Thrones and stop dragging my heels or I’ll find myself on the pointy end of the sword. The other item is a Game of Thrones magnet set from Dark Horse comics. It has four magnets, each depicting the feuding clans of Westeros. 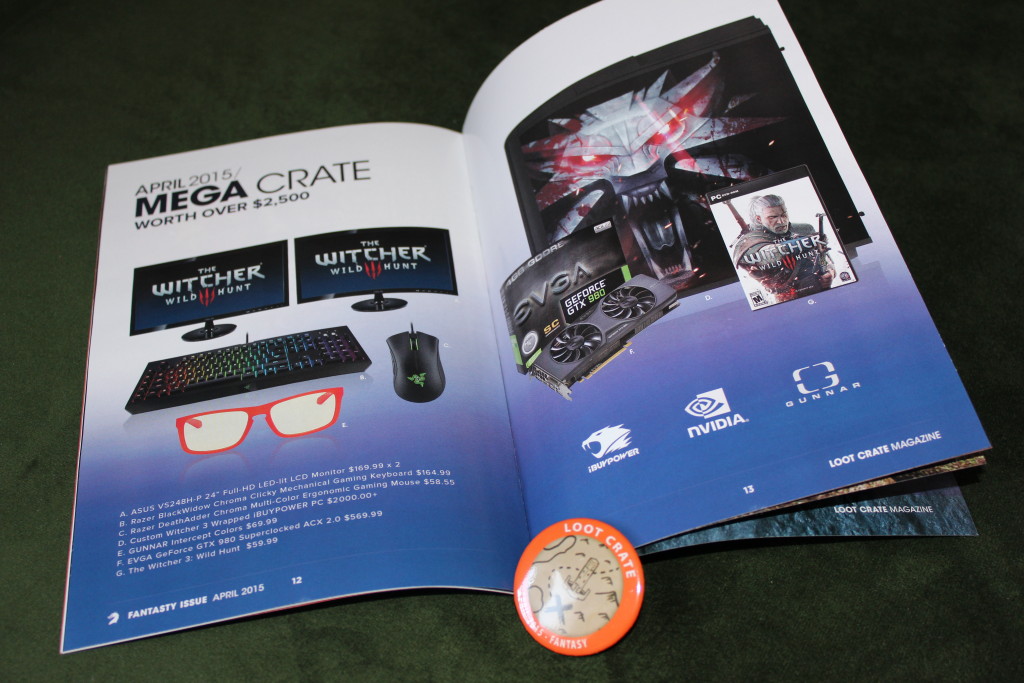 With every box, there is also the Loot Crate magazine and monthly badge. I have to admit, I really like the little badges. I think they are awesome. Speaking of awesome, it’s worth mentioning this month’s Mega Crate, which is a proper gaming system with all the bells and whistles. It includes an Exclusive The Witcher 3: Wild Hunt Wrapped iBuyPower PC Custom Built Gaming PC, Two Asus 24″ Full-HD LED-backlit LCD Monitor, Razer Blackwidow Chroma Keyboard, Razer DeathAdder Chroma Mouse, Gunnar Intercept Colors Glasses (I own a pair of black ones – so worth it), and The Witcher 3: Wild Hunt PC game.

Not every crate appeals to everyone, but there are always a few items that someone will enjoy. I have to admit, not everything in every Loot Crate is something I really like, but there is more than one kind of geek, and I really like that Loot Crate recognises that fact. 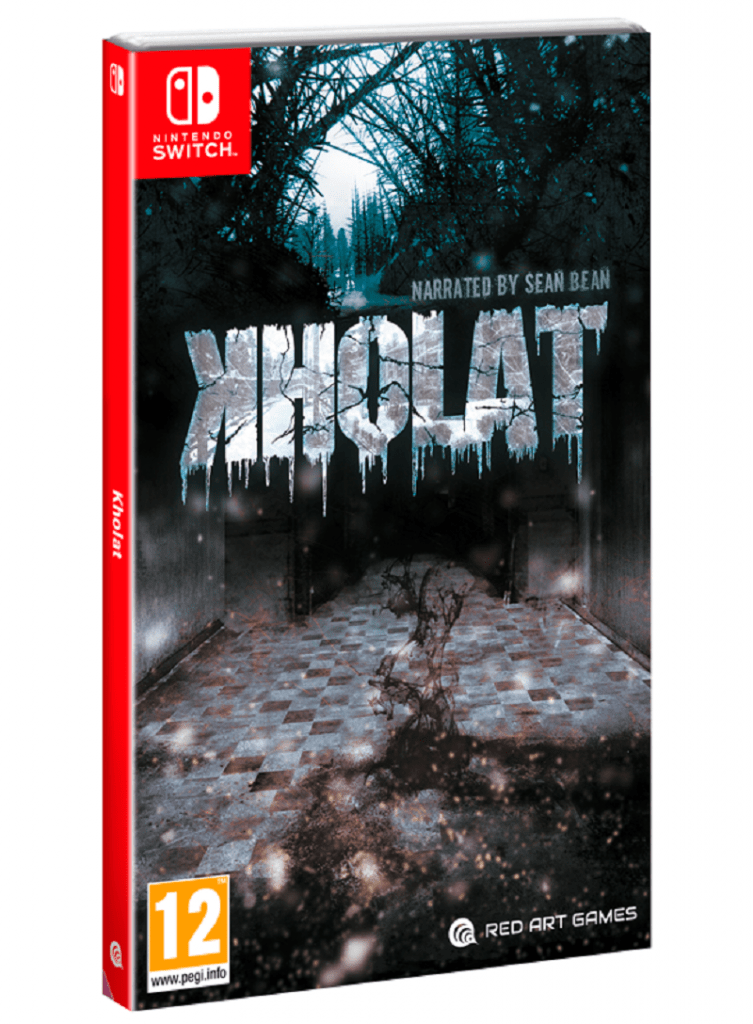 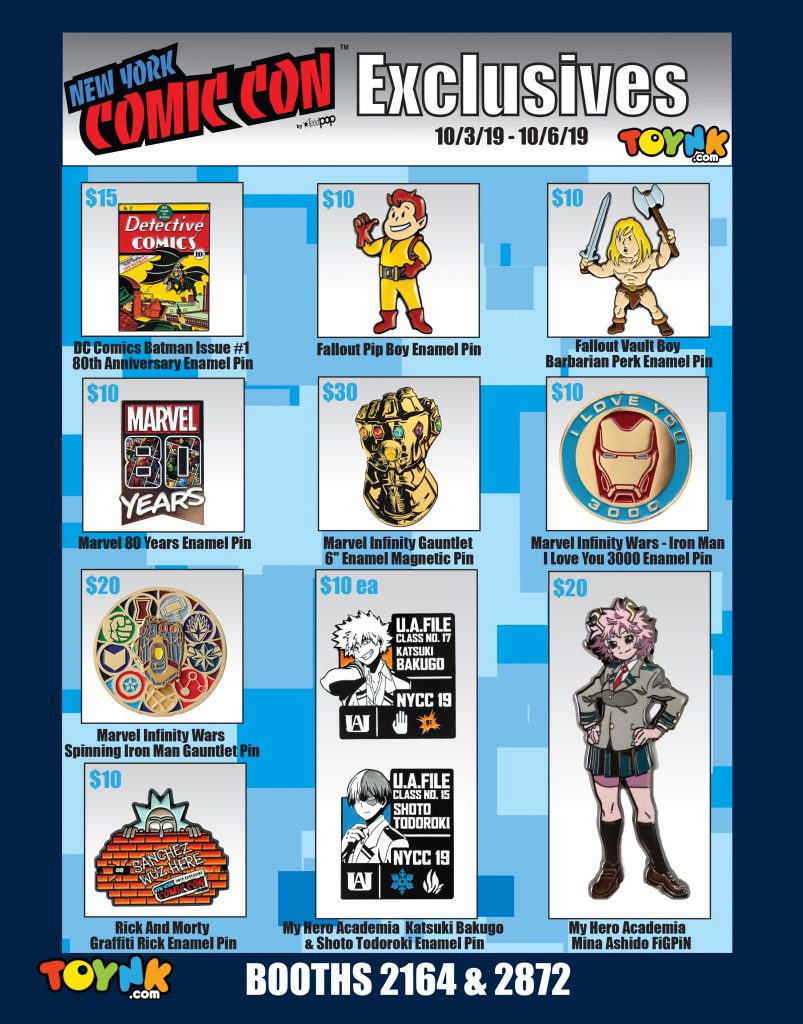 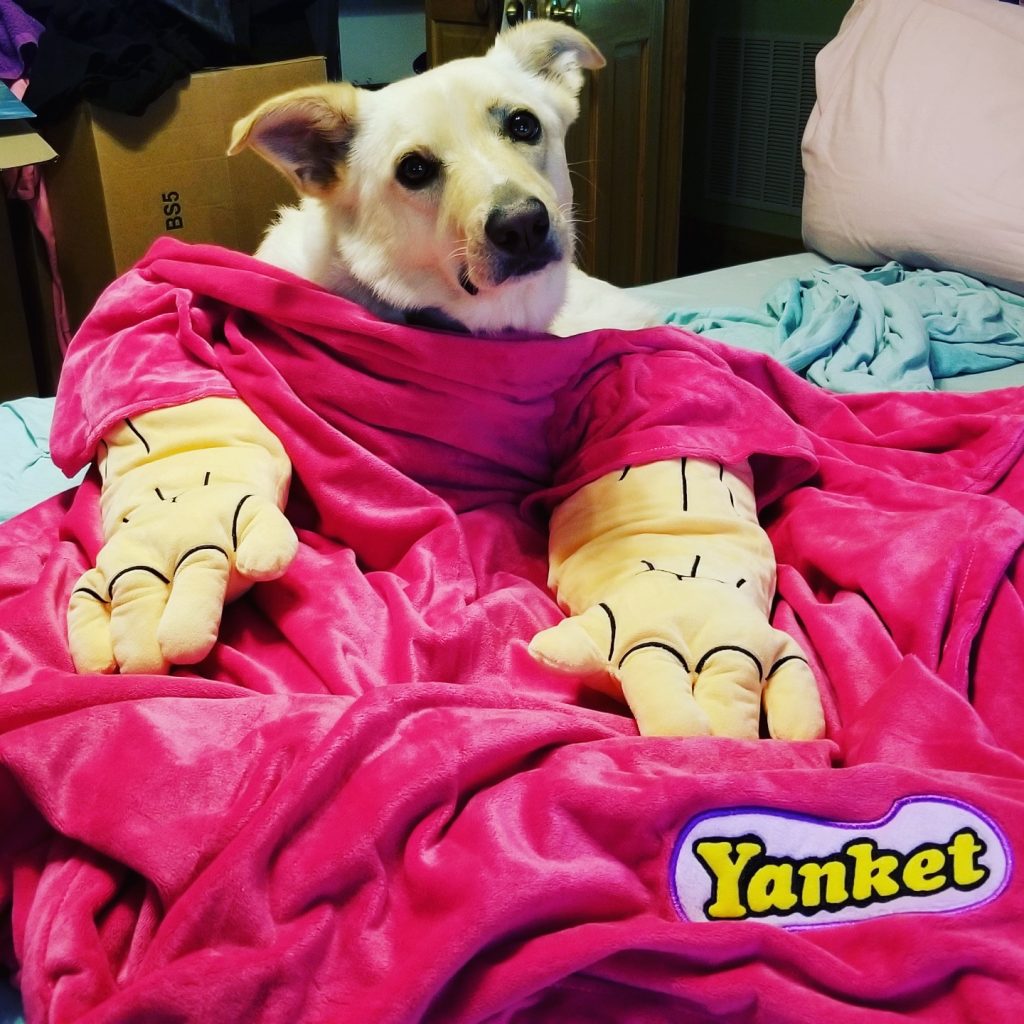