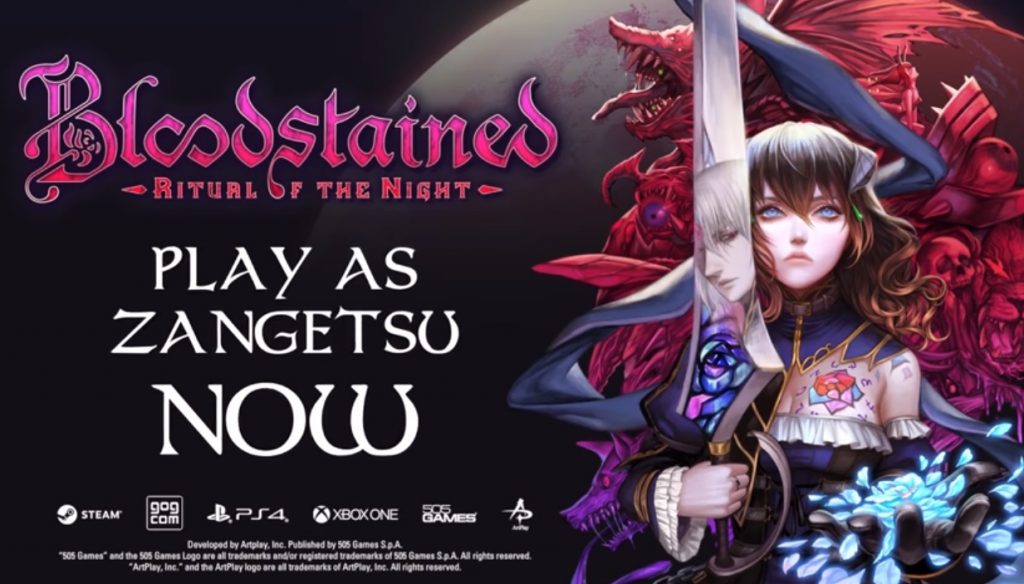 Fans of the indie titles Bloodstained: Ritual of the Night and Indivisible have more content to enjoy through new updates.

I’m going to begin with Bloodstained: Ritual of the Night. 505 Games and Koji Igarashi’s ArtPlay, in association with developer WayForward, have delivered a free update to the gothic-horror side-scrolling action RPG. The DLC is available for the title on PC, PlayStation 4, and Xbox One.

The free update, (which will be making its way to the Nintendo Switch later this month), enables players to mix up their next playthrough of the award-winning game by playing as the katana-wielding demon hunter Zangetsu.

Take note; players who successfully complete the game and receive the “Good Ending” can select Zangetsu as a character when starting a new game, giving them access to the demon hunter’s full movement and combat abilities.

When playing as Zangetsu, players will progress through the same campaign, encountering identical enemy and boss fights but will not use consumables, equipment, crafting, treasure chests, or quests normally associated with the campaign as Miriam.

According to the press release, also available in the free update is Randomizer mode. Using this mode, players can revise many different gameplay parameters in their future playthroughs of Bloodstained: Ritual of the Night.

This means that various elements and locations will be shuffled, which will introduce new challenges and breathe new life into the experience for speedrunners, streamers, and any fan looking get a fresh take on this title.

More details can be found on the game’s website.

As for Indivisible (which we have reviewed), 505 Games and Lab Zero Games are inviting players to try and overcome dozens of hand-drawn bite-size levels in the premium expansion pack titled ‘Razmi’s Challenges.’

This is a premium expansion currently available for players on PC, PlayStation 4, and the Xbox One for $7.99.

The description for the DLC reads:

Razmi has been hard at work in Ajna’s Inner Realm, crafting a series of fiendishly clever challenges that require players to master a combination of various skills and abilities learned throughout Indivisible’s main campaign. Players will complete Razmi’s Challenges by combining learned moves, such as dash into pole vault, and traverse their way across 40 linear hand drawn levels, each with unique limitations imposed on players by Razmi.

Players who purchase ‘Razmi’s Challenges’ can access the new content by talking to Razmi in Ajna’s Inner Realm once Mt. Sumeru has been reached for the first time. Players will unlock more challenges as they progress through the main campaign and acquire additional traversal abilities and skills.

Packed with a comical side-story, ‘Razmi’s Challenges’ will offer players more of Razmi’s signature beloved weirdness along with two new palettes and new trophies and achievements for players on PS4 and Xbox One.

Have you played Indivisible or Bloodstained: Ritual of the Night? Are you looking forward to checking out the new DLC?