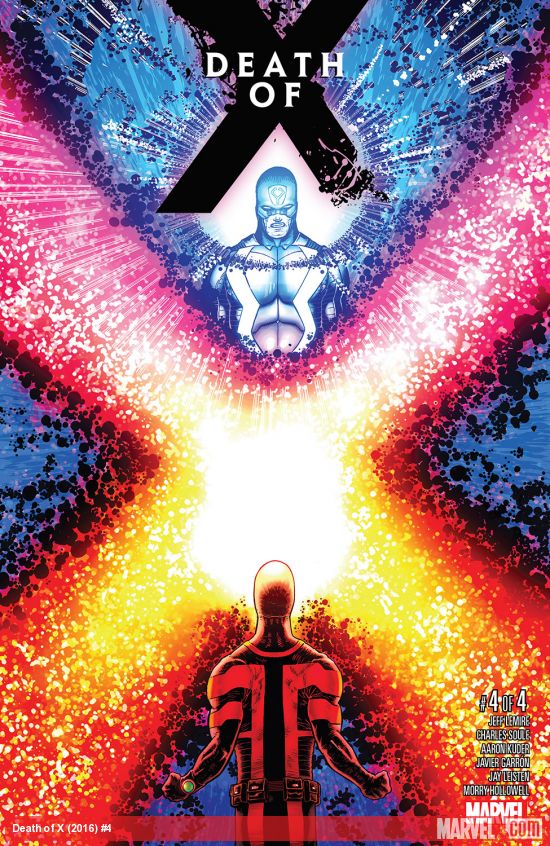 After almost a whole year, Marvel finally revealed Cyclops’ fate in Death of X Issue 4. And yes, it was as predictable as expected.

This post contains major spoilers for Death of X Issue 4. You have been warned!

The Death of X four-part miniseries was promoted as a story that would answer questions about Cyclops’ whereabouts in the All-New, All-Different Marvel relaunch. He was killed by Doom during Secret Wars, and the relaunch that began after an eight-month gap in Marvel’s timeline hinted at Cyclops doing something bad.

Fans weren’t sure if Cyclops was actually dead or not. They also didn’t know what Emma Frost was up to. That’s why Death of X sounded interesting. It promised to answer all of our questions. So, did it deliver? Yes. Was it a good story? Frankly, no!

The Death of X Issue 4 opened with Cyclops and his team of X-Men using Alchemy to help alter the properties of the Terrigen Mists. Alchemy did manage to alter the composition of one of the clouds but lost his life in the process. This led Cyclops to face Inhuman royalty, Medusa and Black Bolt. The climax involved Black Bolt killing Scott with a supersonic scream.

We then moved on to Cyclops’ funeral. Storm was able to call a truce with the Inhumans and everything kind of went back to normal. However, the twist was that Scott Summers had died back in Death of X Issue 1. The Cyclops we saw in the following issues was an illusion created by Emma Frost. I’m really trying hard not to yell that I told you so!

The way Scott was acting felt a bit out of character for him, and I knew Emma was playing mind games with everybody. However, Emma psychically fooling Medusa, Black Bolt (beings that have psychic resistance), and even Storm (who is known to make it tough for telepaths to enter her mind) felt OP to me. I get that Emma’s a powerful telepath, but come on! This was sloppy storytelling!

The Death of X miniseries had great potential, but in the end, all it delivered was a weak story. As far as the future events are concerned, Storm’s truce won’t last long because of the upcoming Inhumans vs. X-Men war. Furthermore, the consequences of the war aren’t going to be dire because we already know no one important will die.

What did you think Death of X Issue 4? Did you expect that Cyclops was probably death since issue 1? Let us know.