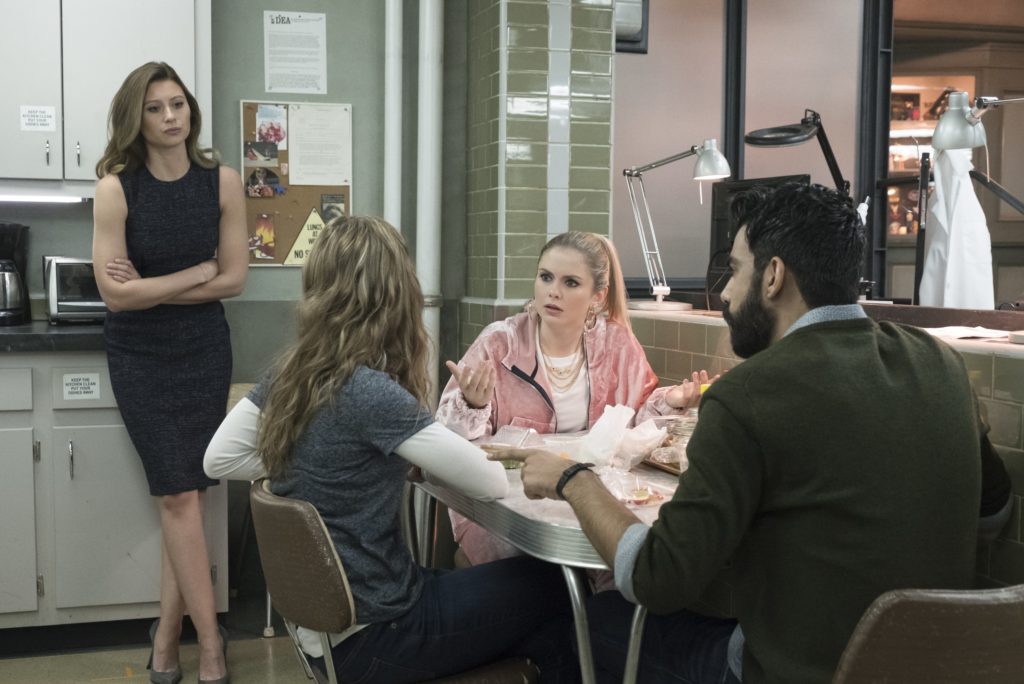 This week’s iZombie was Blaine-heavy, and although he is one of my favorite characters, he is teetering on the edge of becoming an over-the-top villain. Luckily, we had so much awesomeness in “Mac-Liv-Moore” that it helped tone down the mustache twirling that Blaine was inevitably doing behind the scenes.

Let’s break down Blaine’s master plan because it seems to finally all be coming together (you know I don’t have much patience for side stories!). I’ll give it to him, he is crafty (and all about the money). I was a little confused at first what with him talking about buying up real estate, but when he decided to turn the mayor back into a human and then murder him on camera to prove his cure works then sell it on the black market, I was pretty impressed. He really knows how to maximize a situation. And who else loved the adorkable brain that Don E was on? Sure, it was a stereotypical virgin hacker, but he seemed so soft around the edges; it was a great contrast to the evil that Blaine was hatching. I didn’t love that Blaine was also taking advantage of the hacker brain by spying on Peyton’s emails, but I did kind of enjoy the funny emails that he sent her as Ravi.

Speaking of Ravi, he was also front and center in “Mac-Liv-Moore”. Although it makes me nervous that Blaine has been keeping tabs on the fact that Ravi has a stash of brain tubes (what is he?), I like having Ravi around as the perfect human-zombie hybrid. It was pretty obvious that once he met Isobel he would put two and two together about her being immune to the zombie virus and wanting to study her, but I was pretty surprised that Isobel wanted to go along with it. It was all very nerve-wracking to have Ravi find out that the reason Liv tried to give Isobel the virus is because she is a coyote. I know Ravi is super worried about her, but with the way that this group of friends all works together, it is unsurprising that they are all completely supportive and in it together. I actually really like the addition of Isobel, but it all seems a little too neat.

I am still unsure about Major and how he is fitting into everything. I just want him to go back to being the ditzy roommate of Ravi’s instead of seeing him back one bad decision after another. And now he has turning a human into a zombie under his belt. I know that he has done wrong in the past and always gotten out of it (Chaos Killer?), but I don’t see any way that this can turn out well for him in the long run.

I need to give a shout to Clive as Dungeon Master. I knew that as soon as he dipped his toe in that universe last season, he would fall in love. I would have liked to see him in action a bit more, but what we got was fun enough. And goodness, I really disliked the rapper brain that Liv was on this week, and Rose McIver did an okay job with it, but her rapping skills were actually pretty good! That was really the only part of rapper brain that I liked: the rapping.

The season is starting to wrap up quickly, and that makes me nervous since we do not have a solid renewal from the CW at this time. All I want is more iZombie! Is that too much to ask? Otherwise, I am going to need that spinoff of Clive being Dungeon Master forever.