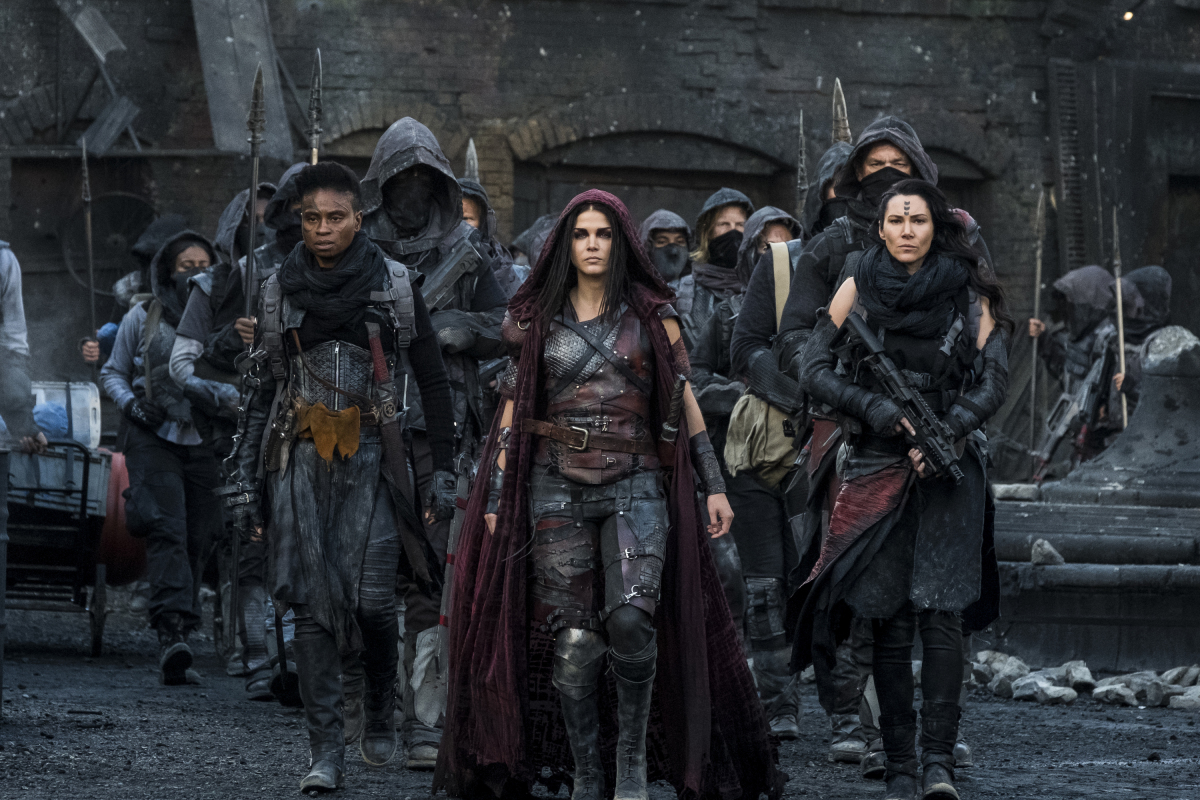 Wonkru is on the move, Raven can’t catch a break, Kane is introduced to tequila, and burrowing, venomous sand worms are apparently a thing we now have to deal with in “Shifting Sands”.

After the attack at the end of “Pandora’s Box”, Octavia is determined to head to war with the Eligius crew. Clarke and Bellamy are just as determined to stop her, and there has been a fairly clear shifting of loyalties. Jackson refuses to tell Clarke what is going on with her mother, Miller flat-out ignores Clarke and Bellamy, and even when people need medical assistance, no one lets Clarke help without Octavia’s say so. Octavia did what she had to do in the bunker, yes, but not listening to Clarke’s suggestions – when Clarke has actually been living in the world and knows things that they don’t – is completely foolish and not something a good leader should do. Octavia is blinded by her revenge, and her threat to Bellamy near the end of “Shifting Sands” implies that she isn’t willing to listen to criticism at all.

Meanwhile, Raven and Murphy are being tortured until they reveal how to unlock the missiles, but it turns out that they didn’t do that; Shaw did. I can’t really get a read on Shaw. He was a guard and not one of the prisoners, and he didn’t seem to be in on the mutiny. Raven was right; he’s not one of them. He’s not one of anyone, and that makes him a wild card, which makes him potentially dangerous. He and Raven struck a deal to try and save Wonkru from the missiles, but I’m not sure whether Murphy still being collared was part of that deal or not. Raven acted betrayed, which could have been genuine or could have just been acting. That Shaw hesitated before firing the missile at the camp leads me to believe it was all part of the plan, but it’s hard to tell. He clearly wants to save his own skin, and if Murphy had known he was being tracked, I don’t think he would have gotten in the Rover with the rest of the group. 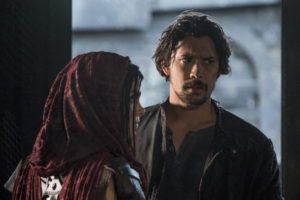 The 100 tends to be pretty good with episode titles. “Shifting Sands” references not only the sandstorm Wonkru has to deal with, but also possibly the shifting of the tide. Season 4 seemed to established that Diyoza and her crew of criminals were the big bad of season 5, but in nearly every episode since “Eden” there have been hints that Octavia is being set up as the actual villain. Her bloodthirsty ways and status as cult-like leader have earned a side-eye from almost everyone, including her trusted allies and confidantes Indra and Kane. The 100 has certainly never shied away from “going there” – Clarke killing Finn, Octavia killing Pike, Jasper’s suicide, multiple genocides – but I don’t know if they’d ever go quite that far. Still, it’s an interesting concept, and if the plot goes in that direction, I can almost forgive Octavia’s irrational behavior.

So…I’m not sure how many of you are familiar with the theory that the people in the bunker resorted to cannibalism, but there is some evidence of it in “Shifting Sands”. Everyone is cagey about what exactly happened in the bunker – Kane has previously referred to something known as “the dark year”, and now Jackson isn’t telling Clarke something. Their prayer before dinner was a little shady – “All of me for all of us” – and when Clarke suggested that the rations might be responsible for what’s-his-name’s…uh…intestinal issues, Kara and Octavia were quick to dismiss the idea. The next morning, after the sandstorm, Kara is surprised that Octavia wants to leave the bodies behind. Now, all of these can be handwaved by fairly rational explanations – “the dark year” could refer to anything, the rations clearly weren’t responsible or everyone would have had worms, and leaving the bodies behind could be about lack of respect for the dead – but everything together is kind of suspicious.

What did you guys think of “Shifting Sands”? Do you think Octavia is being set up as the villain? What’s your opinion on the cannibalism theory? How long do you think until Octavia tries to kill Echo?