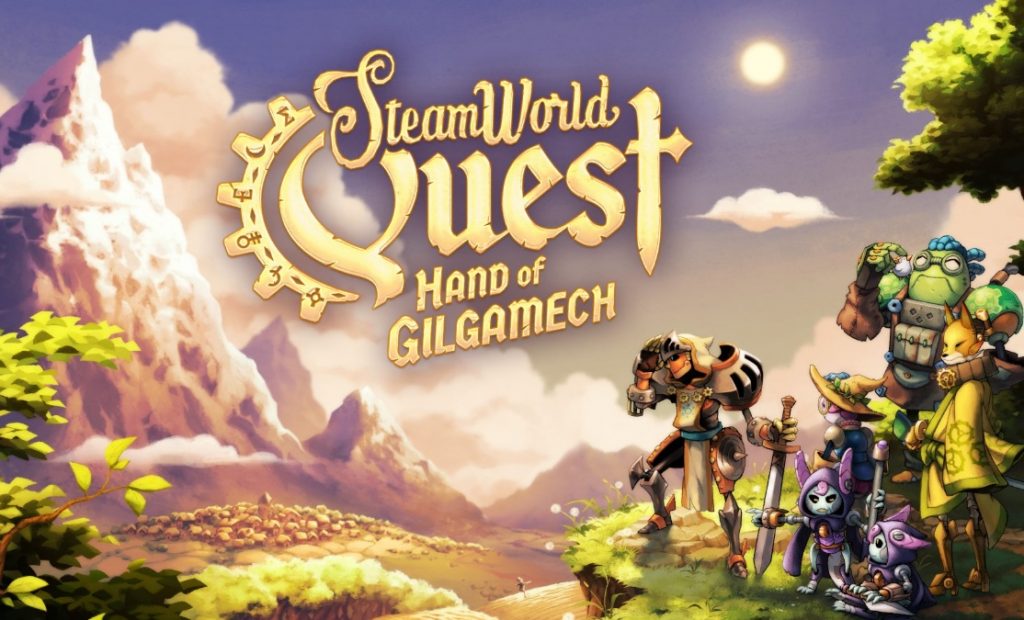 SteamWorld Quest: Hand of Gilgamech offers an enjoyable combination of RPG and deckbuilding mechanics. While the story is a bit lacking, the gameplay offers a lot of variety that will keep you engrossed for hours.

I was provided a free review copy of SteamWorld Quest: Hand of Gilgamech on Steam/PC. The opinions are my own.

If it were possible, I would just write in this review that SteamWorld Quest: Hand of Gilgamech is one of the best RPGs I’ve played in a long time and you should all check it out.

But anyway, I have to talk about why I think that. So, let’s begin.

I’m a fan of RPGs. I enjoy creating a team of characters with different abilities and have them wander through a fantasy setting. SteamWorld Quest offers what I like about RPGs. It has a Steampunk setting and an awesome deckbuilding mechanic.

You play as robots who must work together to save the world. Again, the story isn’t anything original. However, the characters have different personalities and they interact well with each other.

There’s Armilly, a young knight-in-training. Copernica (my favorite) is a wizard/alchemist. Galleo is a crafts robot. Orik is a samurai. Tarah and Thayne give you a mix of magic and stealing.

You begin the game with Armilly and Copernica. More members join the party as the story progresses. However, you’re only able to have three members in your Active party for battles. Also, each character can only hold 8 cards which means you have a 24 card deck to use in every fight. The small size of the deck allows you to manage cards easily. This game makes sure deckbuilding doesn’t overwhelm the RPG aspect.

Basic/Strike and Upgrade cards can be used without cost. Skill cards require Steam Points. You can collect Steam Points by playing cards that are free of any cost. You can also perform chain attacks. This is done by playing three consecutive cards belonging to the same character. The final chain attack depends on the weapon equipped by the said character.

For example, depending on Copernica’s weapon, her chain attack can cast a barrier on her team or damage foes.

During each battle, you draw 6 cards and are allowed to play only 3 cards. You can swap 2 cards (from the 6 you drew) during each turn. Of course, there are certain cards which can increase the number of cards you can swap.

Certain character cards work well together to perform combos. For example, Armilly’s attack can do more damage if you play Galleo’s card before hers.

The entire card selecting dynamic is quite fun.

This gameplay video will help you understand a bit more:

You can craft more cards if you have the required resources. New cards can also be found in hidden chests or during certain character-centric events.

Another great thing about SteamWorld Quest is it doesn’t limit characters to one type. It’s common in RPGs to have an attacker, a healer, a tank, etc. While you can see Galleo is more of a tank or Copernica is a mage, it doesn’t mean you can’t use them for other things.

Depending on the cards you select, you can make Galleo a tank and a healer. Copernica can be someone who offers support or you can turn her into an attacker. Being able to change the roles of the characters (whenever you want) provides you with more choice regarding how you want to play. You aren’t forced to always keep a certain character in your Active team. So, yay!

As for some of the minor negatives, there isn’t a lot of variety in the foes you battle. A lot of them are just recolored versions of familiar enemies with increased stats. There isn’t a lot of exploration either. You can go back and play previous chapters, but skipping through all of the cutscenes you’ve seen before can be a bit annoying.

At least, there is a fast forward button to help make things convenient.

Having said that, you should definitely play SteamWorld Quest: Hand of Gilgamech. With around 15 hours of content, appealing art, and a whole lot of variety when it comes to deckbuilding, it’s more than worth the price.

You can purchase it on Steam. It’s available on the Nintendo Switch, too.