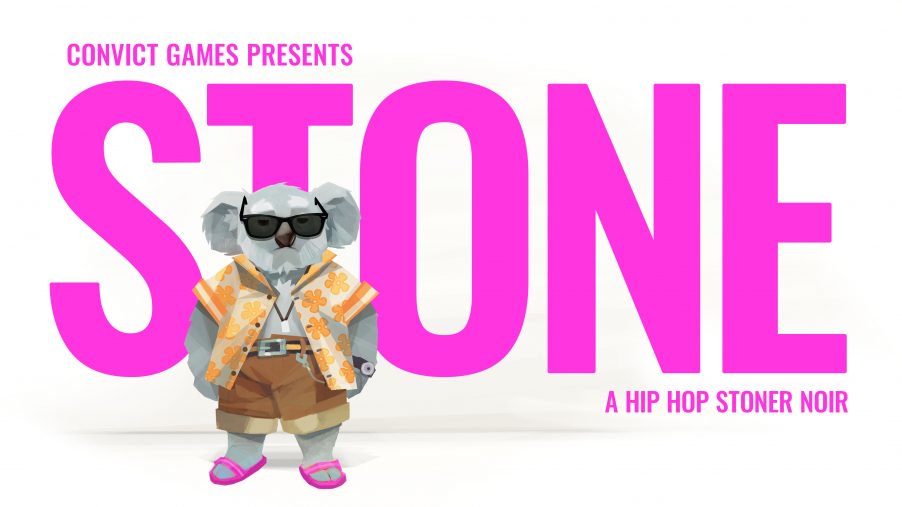 If you are looking for a game title with a queer protagonist, you should consider checking out Convict Games’ Stone. Described as a “Hip-Hop Stoner Noir,” it puts you in the shoes of a koala named Stone as he searches for his kidnapped boyfriend.

I was provided a free copy of Stone on Steam for review. The opinions are my own.

I was looking forward to getting my hands on this game ever since the gameplay trailer was released. We don’t get a lot of queer games. That is why I try my best to play the queer titles I can find. Stone is an easy game. You can end it in under 3 hours if you decide not to watch some public domain movies in the in-game theatre or the television in the lead’s house. The titles include Night of the Living Dead, The Cabinet of Dr. Caligari, and The Story of the Kelly Gang.

The game begins with our koala waking up from a hangover and noticing Alex, his boyfriend, has gone missing. He then gets a phone call from someone saying Stone’s life is over. Fortunately, Stone is a private investigator and he takes it upon himself to track his footsteps from last night and get his boyfriend back.

There isn’t much of a gameplay system. You walk around a limited number of locations (including a bar, a club, and Stone’s house) to talk with various characters. This game is meant for casual players or those interested in a whodunnit story. Don’t expect action sequences or puzzles.

This game lets you accompany Stone on a personal journey which makes him re-examine his life. The writing is engaging and you are likely to find yourself interested in seeing Stone reach the end and find answers. The only thing I didn’t like is the lack of control you have over the narrative. There is an option for you to make Stone interact with people in a soft or harsh manner. However, regardless of your choice, the narrative journey will remain the same. So, there isn’t much replay value.

The graphics are colorful. Some might feel they need a bit more polish, but I was okay with the presentation of the anthropomorphic animals inhabiting the world in Stone. The soundtrack makes use of music from a range of talent including Warchief, Golden Grove, and Grand Oyster Palace. You might find some new artist to keep an eye on through this game.

All in all, Stone is one of those titles which want you to relax. You simply have to click (or button-press if you’re using a gamepad) your way through an emotional story with a queer lead. If you don’t have anything to do this weekend, consider checking it out.

Have you played Stone? Let us know.