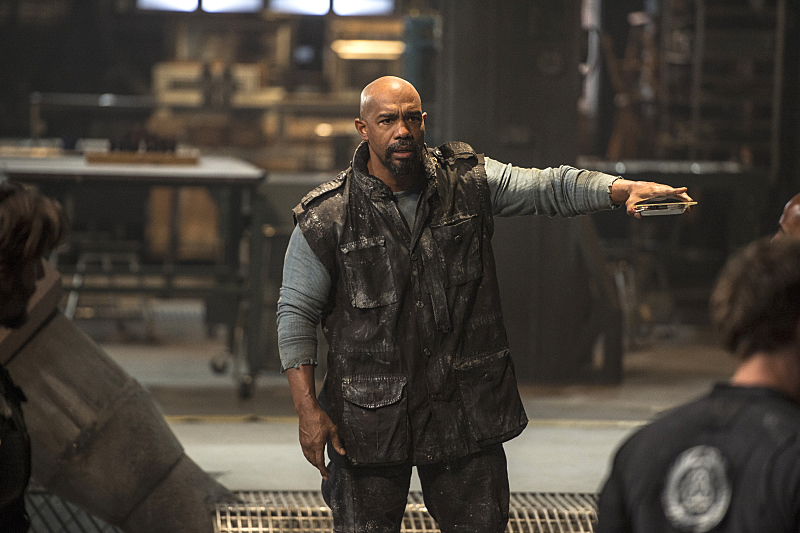 A change of leadership on The 100 is about to pave the way for all-out war between the Arkers and the Grounders. Which side are you on?

“Watch the Thrones” was an episode that was very much focused on government and leadership. One of the things I have always wanted on The 100 was to learn more about the Grounder culture, and season 3 is delivering this in spades. Whereas in season 1 action was heavily centered around the dropship, and season 2 took place split between the Ark camp and Mount Weather, season 3 has finally shown us other Grounder clans, as well as what I presume is the Grounder capitol city (Polis). With Lexa’s power as commander weakening, the Ice Nation’s queen calls for a vote of no confidence (and I was transported to a Star Wars prequel). A challenge is issued, culminating in trial by combat (and I was transported to an episode of Game of Thrones – I assume that’s where the episode title comes from). 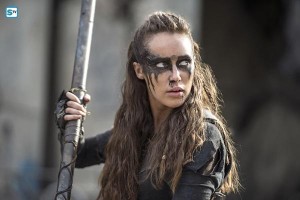 The difference between Arker and Grounder culture is never more obvious than it is in this episode. You have a trial by combat between Lexa and Roan – which ends with Lexa not killing Roan, as she is meant to, but throwing her spear into Queen Nia, effectively making Roan the Ice Nation king – contrasted by an election for the new chancellor of the Arkers – a vote that goes rather unexpectedly, as last-minute addition Pike is elected over both Kane and Abby. And after this episode, and knowing the character of both leaders, I struggle to decide which one is worse. Lexa betrayed her alliance with Clarke but was shown to be somewhat noble during the challenge – not killing her beaten opponent, who was really a pawn in the whole thing, but ridding herself of the real enemy. Meanwhile, Pike has come into a society that is trying desperately to avoid a war and is single-handedly going to throw them all into it. When one of your first official acts as newly-elected chancellor is to slaughter a bunch of your allies, I side-eye you pretty hard.

Ladies and gentlemen, the importance of voting. 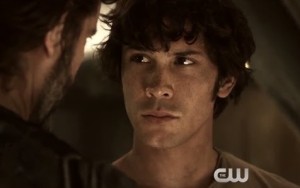 What disappoints me the most is Bellamy. The obvious fridging of Gina last week – and the continued absence of arguably platonic other half Clarke – has him in a freefall. Because it’s Bellamy, he blames himself for what happened in Mount Weather, and because he’s emotionally vulnerable, he succumbs to the desire for revenge. I’m disappointed mostly because I thought Bellamy was past this. He has some staggeringly fantastic character development, and this feels like a major step back. The fact that he was willing to effectively murder 300 innocent people because of the actions of one lone assassin… No, this isn’t the Bellamy I’ve come to know and love. This is season 1 Bellamy. He was an ass.

The thing is, Pike’s explanation that Grounders only understand strength, and that’s why they should attack the peace-keeping force camped outside their walls, is flawed. If you’ll notice, they were heading out to do this massacre at night – possibly when the Grounder force was asleep. So they were going to sneak up on them in the middle of the night and attack them unawares. That is not a show of strength. That’s a prime example of cowardice. The Grounders will not look at them and think, “Wow, what a prime show of strength in the face of battle.” They will think, “Wow, those people slaughtered allies in the dead of night.” The Arkers are teetering on the brink of war; Pike’s actions will lead them boldly into it. 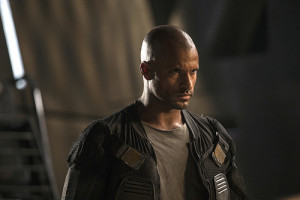 Rising anti-Grounder sentiment among the Arkers has me extremely worried for Lincoln. Aside from the knowledge that Ricky Whittle has been cast in STARZ’s American Gods adaptation, they are heavily foreshadowing something very bad happening to Lincoln. Good science fiction relates to real-world problems, and this episode basically punches you in the face with a metaphor for Islamophobia. After all, Farm Station is blaming all Grounders for the actions of one clan – a clan that all of the other clans acknowledge is way more violent and war-hungry than the rest. I mean, someone threw a rock at Lincoln just because he’s a Grounder; when he tried to stop them from attacking the peace-keeping force, Monty’s mother scoffed, “oh, yeah, good Grounder,” and kind of made me instantly dislike her. As though Lincoln was the bad guy for not wanting people to be needlessly killed.

Speaking of Monty, he is stuck in a subplot in which I find myself less and less interested every week – namely, Jasper’s self-destructive spiral. This week, he stole Finn’s ashes for some reason, and it was accidentally spilling them on the ground that finally made him break down. Although it may have also had something to do with him and Monty screaming at each other and Monty storming off, declaring himself done with Jasper. Hopefully this means we can leave the “Jasper grieves” plot behind and free Monty up for more interesting stories – like whatever seems to be going on with his mother. (I’m still convinced something weird happened to his dad.)

Other things to note in this episode are the existence of nightblood, which is apparently essential for becoming the commander, and the introduction of Miller’s boyfriend. It would have been nice to see Miller, but at least we got to see Monroe and Harper again. Too bad it was for, like, ten seconds.

What did you guys think of “Watch the Thrones”? Let us know!