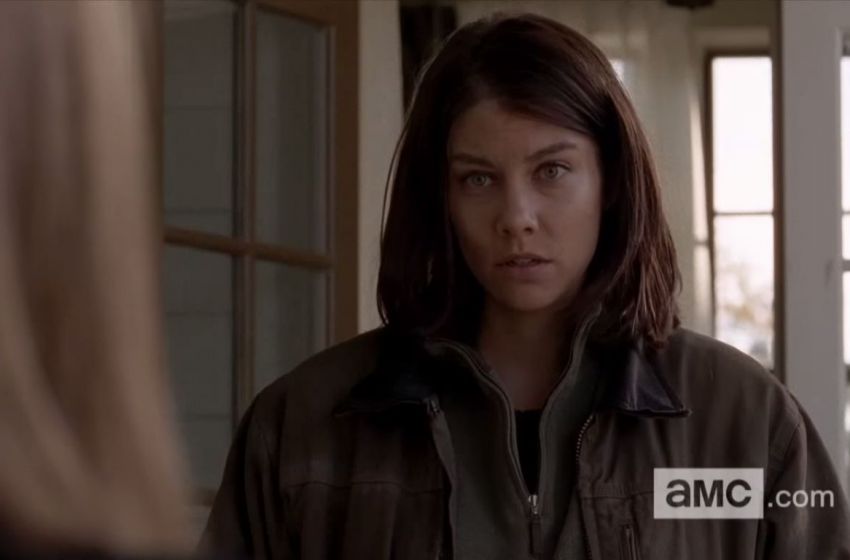 After all the rumor hype over the season five finale of Walking Dead, I doubt I’m the only person who feels like it was pretty anticlimactic.Which is sad, because overall it was a good episode – but they certainly fell short of their usual ridiculous death quota. 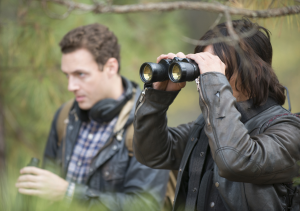 I was definitely excited to see Morgan show up at the very beginning of “Conquer”, and at least we weren’t disappointed in regards to his story line! The biggest issue was that he didn’t exactly take care of the “Wolves” like I thought/hoped…but it was awesome to see him fight, and even better that he was instrumental in keeping both Daryl and Aaron alive when it seemed certain that they wouldn’t make it after being caught in the wolf-guys’ trap.

Meanwhile in Alexandria, there was a lot going on – too much, really. No wonder they had to extend this episode to a run time of more than an hour, because they clearly didn’t want to cut anything or leave any major plots too open-ended. Personally, I’m okay with the latter, but I do feel like they could have done a better job of editing “Conquer” and kept it to the usual 40-ish minutes.

I will say that after last week’s episode I had serious concerns about the return of crazy Rick, but happily, this episode handled his character extremely well. I liked that he admitted that he screwed up, though it wouldn’t have hurt for him to say as much to more than just his own group.

On the other hand, it seems pretty clear that Carol has really gone off the deep end, and I’m not sure how I feel about that. As much as I enjoyed watching her threatening Pete, the fact that she doesn’t seem to want to be a part of the Alexandria community probably doesn’t bode well for her character’s future. And did anyone else catch Eric looking at Carol while she was talking during the community meeting? Because it seemed to me that he may not have believed everything she was saying, and as he was observing the group for a while I kind of hope that he knows (or at least suspects) that Carol isn’t as weak as she’s let on. 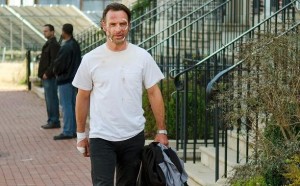 And speaking of characters going off the deep end, let’s talk about Sasha and Gabriel! In the beginning of “Conquer” Sasha literally laid down in a pit full of dead walkers, and later on Gabriel went for a stroll outside the fence – unarmed – and almost sacrificed himself to a walker. Fitting that these two clashed toward the end of the episode…but while I understand that Sasha killing Gabriel wouldn’t have been the best for her character, I have to admit to being frustrated that he’s still alive. However, maybe after his little altercation with Sasha Gabriel will be less annoying next season. I know I’ve got my fingers crossed!

As much as I didn’t care for how much this episode jumped around, it was good to see some interactions that they seem to have been putting off. Not only did we finally catch a glimpse of Tara (who thankfully woke up at the very end), but there was also a bit of closure between Abraham and Eugene, which was nice. And as for Glenn and Asshat Nicholas, well, even though they didn’t make it back into Alexandria before the end of the episode, I’m glad that’s out of the way, too. But of course Glenn is still Glenn (I both love and hate that he couldn’t kill Nicholas) and I can only hope that his actions (or I suppose in this case, lack of them) won’t come back to bite him in the ass.

Everything came to a head at the fireside chat, and even though this was one of the parts of “Conquer” where they jumped around a lot, there was a pretty good balance of suspense versus conversation…though again, a bit anticlimactic for a season finale  Sure, “Porchdick” Pete came along and killed Reg, which led to Deanna giving Rick permission to shoot Pete, but we barely know these characters – their deaths didn’t seem much more important than the “Wolves” popping back up and killing the guy in the red poncho who Daryl and Aaron had been following around.

That said, Morgan arriving just in time to watch Rick shoot Pete in the head should make for some interesting conversations in the future. But other than that and the fact that Glenn and Nicholas are presumably still outside the walls, things seem pretty settled at the moment – especially for Walking Dead.

Now if only I could decide how I feel about that…