The world is sort of scary right now for members of our community, but there were many wonderful 2016 LGBTQ+ moments for us in geek media this year.

We’ve got a tradition here at the Geekiary of chronicling our favorite moments throughout the year as a celebration.  Our 2016 LGBTQ+ Moments in Geek Culture is not a comprehensive list and has been compiled by staff members. We most certainly aren’t able to capture everything as we don’t consume all media. If we didn’t include your favorite moment, please feel free to comment below!  We love to learn about new media that isn’t on our radar.

Yuri On Ice – Nominated by Angel 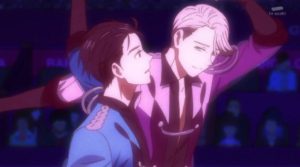 Yuri on Ice has taken the anime community by storm and represents a valuable piece of representation for the LGBTQ+ community.  The show isn’t listed as BL or Yaoi (the m/m genres of anime or manga) but features a beautifully written romance between the two lead male characters.  In addition, the creator has been incredibly supportive of fandom on Twitter and has stated that the world she created for these characters is free from discrimination over who the characters choose to love.

I’ve written about this show a lot here, but articles of note include our Interview with Johnny Weir and “Love Wins on Yuri on Ice.”  The fact that this beautifully queer show unfolded during a rightward political shift in my country was a relief and distraction for many LGBTQ+ fans.  It gave a lot of us hope when it was sorely needed.

Tara: I love how the fact that Sulu is gay was just *there*. It wasn’t there for plot or even character development; it’s just a fact of his being and I can’t wait for a day when more movies and TV shows portray characters’ sexuality in such a nonchalant way.

Angel: This felt like a wonderful way to incorporate an LGBTQ+ character into a story seamlessly and without issue.  While I am eager for a protagonist in a major franchise to come out as something under the queer umbrella, I do appreciate the effort here.  This is how you do it.

Aside from the arc of Alex realizing that she likes women and coming out to her friends and family, you have a beautiful, totally relatable romance between Alex and new character Maggie Sawyer. At first they clashed, but then they grew to respect each other, and eventually Alex recognized that she had romantic feelings for Maggie. Maggie initially rejected Alex on the grounds that Alex was still new to being gay. Then a near-death experience made Maggie realize that it’s stupid to ignore a good thing. In a year when so many lesbians were killed off just after finding happiness, it’s refreshing to see a couple that may actually stand a chance. 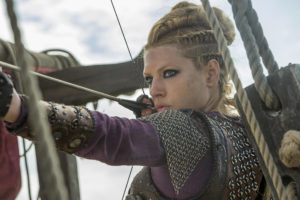 Lagertha on her own is a simply amazing character; the epitome of the Badass Woman – a warrior, a mother, a wife, a friend, and above all, someone who keeps her promises (even when doing so means she has to make some tough decisions…or kill someone). She eventually finds her peace with Astrid, a woman who respects her in a way that no man ever did. She is also training Astrid to fight, which gives them an even deeper bond. I also loved Katheryn Winnick’s comment, “I don’t feel that Lagertha is necessarily a lesbian”, that Lagertha simply found “a love with Astrid”, because I feel like that means this is likely positive pan- or bisexual representation!

Jude and Zero (Hit the Floor) – Nominated by Farid

While Season 2 of Hit the Floor gave everyone a lovable queer couple in Zude (Jude and Zero), Season 3 wasn’t without its tear-jerking moments. Famous basketball player Zero still needed time coming to terms with his relationship with Jude and it caused them to break up. However, Hit the Floor showed Zero finally finding courage and proclaiming his love to Jude in front of everyone. Zude is an amazing example of accepting your sexuality, a supportive and healthy relationship, and taking on the whole world with the person you love standing right by your side. Also, it never hurts to have someone who has your back even if you’re a murder suspect.

The years 2016 was an important one for Colton Haynes. The Teen Wolf and Arrow star finally decided to officially come out, and even talked about his struggles with depression. Furthermore, Colton was awarded the Visibility Award by the Human Rights Campaign. Whether you like him or not, a lot of young kids look up to him and that’s a good thing. 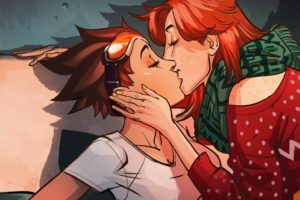 The gaming world isn’t known for having a lot of queer representation. That’s why it is always a good thing when a major game developer decides to add some inclusivity. Blizzard Entertainment revealed that Tracer from the hugely popular Overwatch game is a lesbian and in a relationship with another female. Of course, it was met with some people being hurt about the sexuality of a fictional character. However, it was a major step in the right direction to make the gaming world more representative. Tracer was a famous character even before the game’s release, being used in almost all of the marketing content. It goes to show how serious Blizzard Entertainment is to make the game more inclusive. Furthermore, the company has revealed that more queer characters will be unveiled very soon.

While the Penguin/Nygma pairing in Gotham isn’t without fault, Nygmobblepot is still an important queer moment on TV. The writers of Gotham added their their own spin on the two characters, and while it made some people angry it gave numerous others something to feel happy about. Furthermore, Robin Lord Taylor (who plays Penguin) also came out as a married gay man. 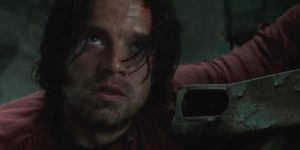 This one goes to the fans and not what we were given in canon.  The Captain America fandom got #GiveCaptainAmericaABoyfriend to trend for many hours earlier this year. A few months later we got a hint that Bucky Barnes might be bisexual. Coincidence? Maybe.  But I like to believe we were heard and I’d love to see something canon on our list for Captain America next year.  Also, shout out to our predecessor #GiveElsaAGirlfriend that launched the trend.

Previous:Geekiary News Briefs! Attack on Titan Trailer, Captain Underpants, Alien: Covenant, and More!
Next: She Gave Us Hope: A Carrie Fisher Tribute from The Geekiary