The Walking Dead 6×12 Review: Not Tomorrow Yet 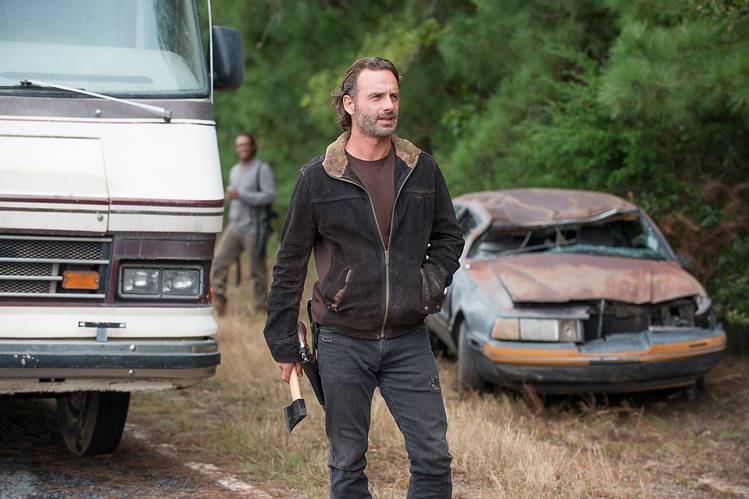 Well, if there’s one thing I can say about “Not Tomorrow Yet”, it’s that in this episode The Walking Dead really went out of its way to enforce the whole idea that no character is truly safe.

Seriously, “Not Tomorrow Yet” was extremely heavy-handed on all accounts, though to be honest I think that I’ve been noticing that pattern for a while now (especially in Greg Nicotero-directed episodes). I mean, even Chris Hardwick made a comment on Talking Dead about how Rick was “spouting hubris” about winning a fight when they don’t even know what they’re up against…and it’s not like Rick only said something like that once. It was several times at least; I mean, I didn’t count, but yeah, it did get a little bit annoying after a point. 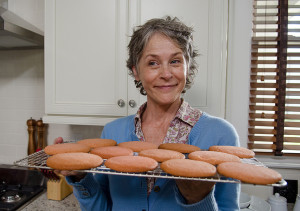 Of course it wasn’t just Rick’s near-constant insistence that they could take on Negan and his people that was heavy-handed; as I already pointed out, “Not Tomorrow Yet” really went out of its way to make us wonder who’s going to be the next to die. I mean, the episode began with Carol going about her daily tasks to the tune of some very upbeat, happy music – including baking beet-and-acorn cookies for everyone in Alexandria. And then later on she had some more-than-just-friends interaction with Tobin. But by the end of the episode, she’d been captured by Negan’s people.

Meanwhile I was *so* excited about Morgan returning back in season 5…but now? I am so over him being around. The worst part about that is that this point he’s one of the few characters who does actually seem to be “safe”…as in, if he ends up dying before the season ends, I’ll be surprised in that “rolling my eyes because Walking Dead is trying too hard to shock us” way. As of right now he’s basically just taken Gabriel’s place as most annoying character (in my opinion), and “Not Tomorrow Yet” left off with Morgan, um, welding something? So who really knows what’s going on there. I doubt it’s good and I doubt it involves him dying anytime soon but honestly if I’m wrong about the latter I won’t be kicking myself because good riddance. 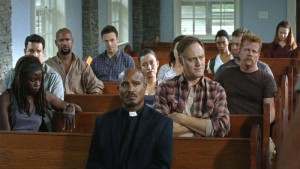 Obviously I’ve had quite a bit to say regarding Glenn this season, considering that the writers are constantly putting him in extremely dangerous situations from which he just barely escapes. I still think he’s the most likely candidate to die in season 6, and I hate that if he does, now he’ll go out actually finally having killed people. But then the writers also made sure that Maggie was on the raid, and then Carol insisted that Maggie stay behind with the vehicles (and Carol stayed there with her) so obviously they both got caught. I mean seriously, “Not Tomorrow Yet” really was like one big bucket of red herrings. Too many all at once, if you ask me, because no, I’m *still* not done listing them!

For instance, I want to feel okay about the possibility of Tara surviving because she (a) survived this episode and (b) she was also a guest on this week’s Talking Dead, but the whole scene where she told Denise “I love you” and Denise responded by saying “I’ll tell you when you get back” is there in the back of my mind, chipping away at how sure I am that Tara will make it through this season. Not to mention the fact that she was basically comparing what they were doing to Negan and his group to what the Governor tried to do to Rick and the others…I mean, ouch? Though I suppose we could take that as the fact that she may see more things that she doesn’t like and end up on Morgan’s side? I’m not even sure what’s worse. (No, okay, killing off an awesome lesbian character who also happens to be in a positive relationship is probably worse.)

As I write this review, it’s become very clear to me that “Not Tomorrow Yet” was basically 40-ish minutes of mini character studies. Even Gabriel got screen time again; not only did he go with The Group, but he got a bit sassy when Rick asked him why he was still wearing his priest clothing, saying “I’m still who I was. I think. And it will be harder for them to see me in the dark.” Then he walked up to an injured member of Negan’s gang, quoted some scripture (“Let not your heart be troubled, neither let it be afraid” etc.), and promptly shot him in the head.

And no, it doesn’t end there. Abraham up and left in just about the worst way – his last words to Rosita were outright terrible. “When I met you I thought you were the last woman on Earth. And you’re not.” Like seriously?! What the eff, Abraham?! So now he’s off on his own doing God knows what, and Rosita is heartbroken and angry, which will likely lead to rash decisions. And one of the first things we see her doing after Abraham’s exit is fighting with Carol over keeping Morgan’s wolf guy secret (ha, that sounds more amusing than I expected).

The other issue with “Not Tomorrow Yet” was that it started extremely slow and then BAM – they’re already on the road to Negan’s compound, they’re there, there’s that argument about Maggie staying behind, and then the trade-off with “Gregory’s” head for Craig goes perfectly. After that though, the tension just kind of exploded in your face during The Group’s silent raid and murder of everyone in that building…although it didn’t remain silent. Sasha missed someone just long enough for him to set off an alarm, but even after that Rick & Co. still had things well in hand. (Or so it seemed.) Probably the most important character in this montage (which got more than a little bit visually messy at one point) was Glenn, as he completed his first kills (insert the saddest face ever emoticon here, my poor bb Glenn) and then was the one who saw the wall of pictures. Pictures of people whose heads were bashed in. After Jesus made that comment about the bat in “Knots Untie“.

See what I mean about the red herrings? 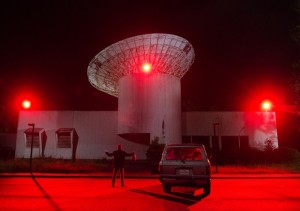 To bring it back around to how heavy-handed “Not Tomorrow Yet” was, I was fairly certain from the moment it opened with such “happy” music, things weren’t going to go well. And as much as I love the Ricktatorship, Rick made a lot of bad decisions in this episode. I agree that they needed to make their move soon, but they did it with half-assed “intelligence” from someone they have no reason to trust. Jesus may be great, but that other guy (apologies, his name escapes me) from The Hilltop didn’t exactly make me feel all warm and cozy. (Hint: It was the complete opposite.)

So they went on this raid with basically no hard information, and had way too easy of a time accessing a “compound” that was, based on the end of the episode, most likely just a satellite location for Negan’s main headquarters. Then for some reason there was a cutaway to Morgan welding something (as previously mentioned), which honestly better be important because it felt awkwardly placed in this particular episode at that particular time. Is he building a prison cell like Eastman had? Or is he doing something much more concerning? (Please let it be a prison cell. Honestly.)

After that little Morgan interruption, “Not Tomorrow Yet” ended with The Group surrounded and, as I’ve already mentioned, Carol and Maggie in the hands of the (an?) enemy. But there are four episodes left this season, which makes me wonder if they’re going to drag this whole situation out or wrap it up “early” just to change things up a bit.

What did you think of “Not Tomorrow Yet”? Who do you think is bound to die before the season ends? Let us know in the comments!