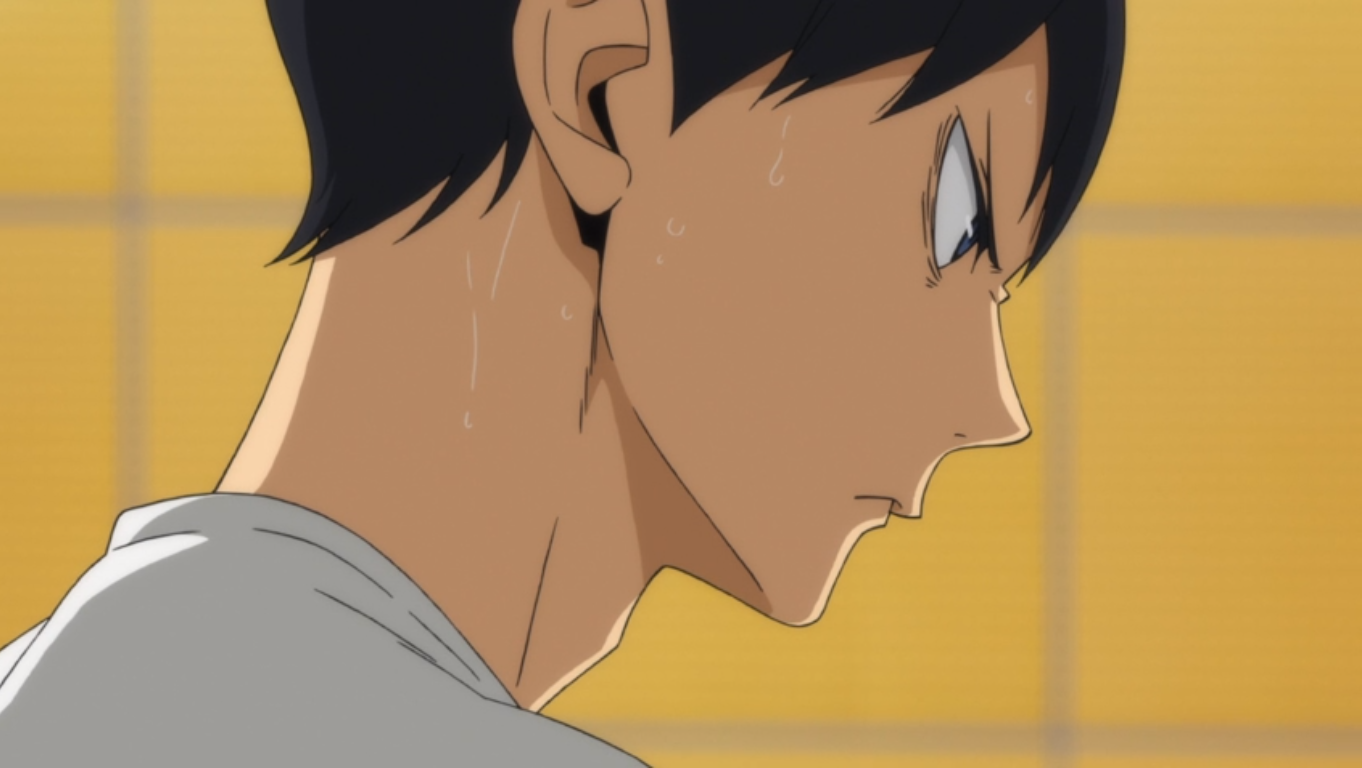 “Hunger” brings an end to the training camps arc. It seemed to have lasted longer in the manga, but perhaps I’m misremembering. At any rate, while I’m sad to see this storyline end, I’m excited that Karasuno is back together. Nationals are on the horizon, so start the hype train now.

The episode title, “Hunger”, seems to be referring to Hinata; Coach Washijo talks about the drive all shorter volleyball players feel to jump higher and be better. Hinata has always had that inside of him, and it’s heavily emphasized in this episode in particular. When he sees Tsukishima set, even though it’s not a particularly good set, it reinforces his desire to get better at all aspects of the sport.

As I said in my review of the most recent manga chapter, it’s amazing how coincidentally timed these episodes are with the new chapters. In the newest chapter, we finally got to see the answer to the question Hinata asked Ushijima in this episode.

That scene also does a great job of showing that what Hinata lacks in skill, he makes up for in sheer determination. And it does this by contrasting Hinata with Goshiki; Hinata has no qualms turning to rivals and opponents in order to get better, but Goshiki was reluctant until Shirabu insulted his pride. It says a lot about Hinata that he knows when to set aside his pride and ask for help.

But I also think there’s a hunger in Kageyama; it’s a little bit different from what drives Hinata, but the junior high flashback serves as a reminder that Kageyama has not always been a team player. He wants to be part of a team but he also is led by his insane talent, and the two are often at odds. Getting to train with some of the best players in Japan has sparked a new fire in him.

I’m not sure how well it comes across to anime-onlies, but I feel like “Hunger” did a fairly decent job at getting across how much of a smug jerk Atsumu is. His comments last week brought up bad memories for Kageyama, and his remarks this week are intended to make him doubt his position on his team.

With all of the changes that surely happened to these two when they were apart, it’s nice to see that as soon as they get back together they turn back into volleyball idiots. That was a nice moment where they stood there silently acknowledging each other before immediately racing to the club room, only to realize neither of them had the key.

I love their dynamic. I’ve mentioned this in my manga reviews, but their relationship really is the backbone of the series. I like that they push each other to do better and that they can dole out the insults just as well as the compliments. In their case, the insults are usually a way to motivate each other. Kageyama didn’t bring up Hoshiumi to put Hinata down, he did it to motivate him to get better.

Something that scene of them tossing the ball back and forth does is highlight how far their relationship has come since the beginning of the series. That they can just be there, calmly discussing what happened to them at their various camps, is inspiring.

There’s one thing about the new season I keep wanting to discuss, and then every week I completely forget to include it. I’m not really a fan of the new ins/outs to the mid-episode break featuring the animal versions of characters. I loved the ones with the characters spiking or serving, especially since they branched out to include players from other teams. But so far, except for the ones during the OVAs, there’s only been crow!Hinata, and I’m over it. Either toss in other characters or forget about it.

Anyway, I’m very excited to see the results of their training camps and to see the team back together again. I’ve missed the other members of Karasuno, and this highly-anticipated rematch against Dateko is going to be amazing.

Have you seen “Hunger”? What did you think?