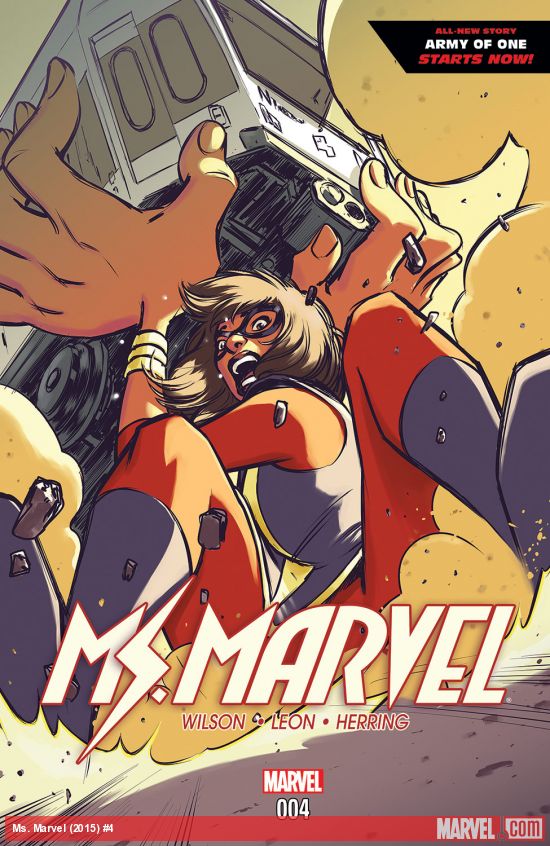 Ms. Marvel #4 brings a new arc for Kamala Khan. She has a lot going on in her life, and ‘Army of One’ makes it clear that being a teenager, and an Avenger, is taking a toll on our young superhero.

The issue opens up with Aamir telling his family that he wants to marry Tyesha. The whole scene is hilarious and also talks about a social issue present in Asia regarding families wanting fair-skinned brides for their sons. Kamala’s family accepts Aamir’s decision to marry, and that ends up putting more responsibilities on Ms. Marvel. Not only does she have to keep up with school, and her Avenger missions, she also has to help plan the wedding. Kamala’s mother knows about her daughter being a superhero, so I don’t understand why they haven’t had a conversation about it again. Hasn’t Kamala told her mother that she’s now a member of the Avengers?

Making young superheroes juggle their social lives along with their hero duties is something we’ve seen in a lot of comic books. However, it is the way that writer G. Willow Wilson presents it in the series that makes it fun to read. She makes sure to add in a lot of comedy throughout her storytelling. Artist Nico Leon also helped with the comedy this week by putting visual jokes in the panels. I found people fishing from their rooftops (I have no idea why), a goat on top of a water tank, a person who looked like Zorro, a raccoon casually eating an ice-cream cone while Ms. Marvel fought bad guys, and some random guy taking a selfie while stuck under our hero’s massive foot.

In order to help Kamala deal with her numerous responsibilities, Bruno makes clones of her by using the golems Loki left behind. It is obvious the plan is going to backfire, and I can’t wait to see how Ms. Marvel will handle keeping her numerous clones under control.

What did you think of Ms. Marvel #4 and the first chapter in the ‘Army of One’ arc? Let us know!

Previous:Mew is Released to the Public: It’s Not Very Effective
Next: Deadpool: Breaking the Fourth Wall on the Big Screen