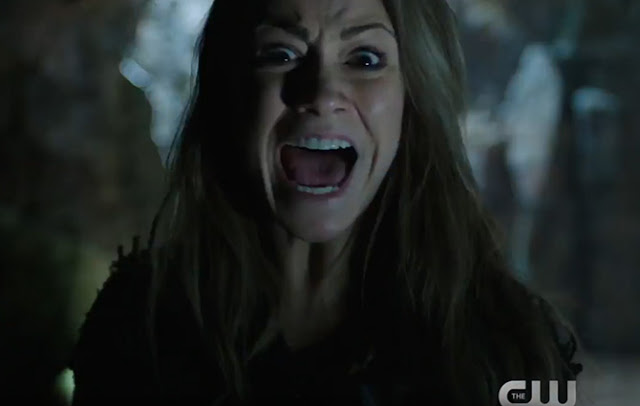 “Demons” was the first episode in a while that I have really, truly enjoyed, and maybe that was because of its return to the basic tenets of what made The 100 a great show: namely, the 100.

“Demons” spent much of its time in Arkadia, with the remaining un-chipped members of Sky Crew raiding the empty settlement for supplies and searching for Lincoln’s journal so that they can find Luna. And though we did have to deal with the City of Light plot that still doesn’t really make sense to me (mostly because I’ve yet to understand just what, exactly, Alie wants), I found this to be a pretty solid episode made up of great performances and a focus on what drew me to the show in the first place: great relationships between well-written characters.

Everyone really sold this episode. Starting the episode with Miller, Harper, and Brian – three underutilized characters – telling ghost stories in a thunderstorm was the perfect setup for a thrilling, tense storyline. In a nod 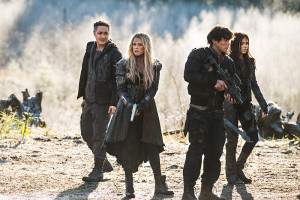 to And Then There Were None, our intrepid band of heroes start to disappear one by one, and the culprit is none other than Emerson, who – as I predicted – came back to exact vengeance on Clarke by basically killing everyone.

Fortunately, only one person died in “Demons”. Now, I say “fortunately” because this is The 100 and the way things have been going this season they could just as easily have bumped off a few more people – for a while I thought Jasper wasn’t going to make it – but in truth I think losing Sinclair is a travesty. He, like many of the other characters on this show who have been killed off, very rarely got the chance to shine, and I wish we had gotten to explore his relationship with Raven more before losing him. The scene in the hangar, with Raven desperately trying to stop the bleeding and Sinclair trying to convince her to get back to the safety of the SUV, was heartbreaking to watch, and one of the few scenes on this show that has literally made me cry. I think what guts me the most is knowing that Sinclair died scared and alone, convinced that Raven was in danger. RIP Sinclair, you will be missed.

Now let’s focus on Octavia, who finally allowed herself to grieve a bit. Her anguish over being back in Arkadia – seeing Lincoln’s blood still on the ground, being back in his room – was just spectacularly done. Marie Avgeropoulos can do a lot with just her face, and I really felt that this was one of her more stellar performances. She’s hurting but pushing through it, and that shows a lot in her expressions. I also think she did a great job of emoting her turmoil over her relationship with Bellamy – whom she still clearly blames for Lincoln’s death, yet he is still her brother – particularly in the scenes in the airlock.

Monty is still dealing with the guilt over having to kill his mother, and while I can feel for what he must be going through, I don’t think the show did a very good job of making me believe their relationship. Before Hannah’s death, the only real times we saw her and Monty interact were scenes with Pike and everyone, planning or meeting or doing something official. She only ever seemed to be in a “soldier” capacity and never really in a “mother” role – not until she warned Monty to get out of Arkadia. So I get his anger over having to kill his mother in a general sense, but I don’t really “buy” it in the context of the show. Nevertheless, I am always happy to see Monty get more stuff to do, because I have always found Christoper Larkin to be an untapped resource. Plus, the blink-and-you’ll-miss-it moment at the end, where Jasper goes to hug Monty and Monty turns away, did a great job at subtly highlighting the fact that Jasper and Monty – who were once like brothers – have been at odds all season. 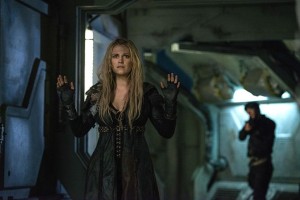 One of the best things about “Demons” for me, though, was the return to the power couple of Bellamy and Clarke. Even without shipping as a goal, I have always felt that these two worked best when they were together. It’s why the later half of season 1 is so strong and why I struggled with a lot of season 2. (Season 3 has its own issues outside of them.) I like the fact that Bellamy and Clarke are on virtually the same wavelength – that even after everything that has happened, they don’t feel the need to explain their choices to each other, nor have they needed to apologize for their actions. It’s understood, and it’s forgiven, and here we are, back again. With Clarke obviously feeling guilty over not killing Emerson when she had the chance, Bellamy refuses to let her shoulder the burden alone. But Bellamy also cannot stand by while his sister and the others suffer, and ultimately it is left to Clarke to save the day.

Our brief time in Polis helped to move forward the City of Light plot as well, which stagnated for weeks while we dealt with Pike and the imminent war with the Grounders, yet is now jumping forward at an almost ridiculous pace. Basically, Emori returned and sought out Murphy, but she somehow managed to get chipped and was only helping Jaha with his and Alie’s plan to take control of Polis. They “outed” Murphy as a “traitor” to Ontari, got him thrown in whatever constitutes as a jail in Polis, and gave Ontari one of the chips. I was less than enthused with this B plot mostly because hasn’t Murphy dealt with enough on this show? And also, I just have no idea what the whole point of this story is. What does Alie want? What is her ultimate goal? Why does she want to control everyone? What is she planning? Why are we twelve episodes into a sixteen-episode season and we don’t know the answers to any of these questions?

Other thinky things I thought:

The 100 still has a long way to go to make up for the missteps earlier in the season, but “Demons” did a good job of laying the groundwork for a return to what made the show great in the first place.

What did you guys think of “Demons”? Let us know in the comments!