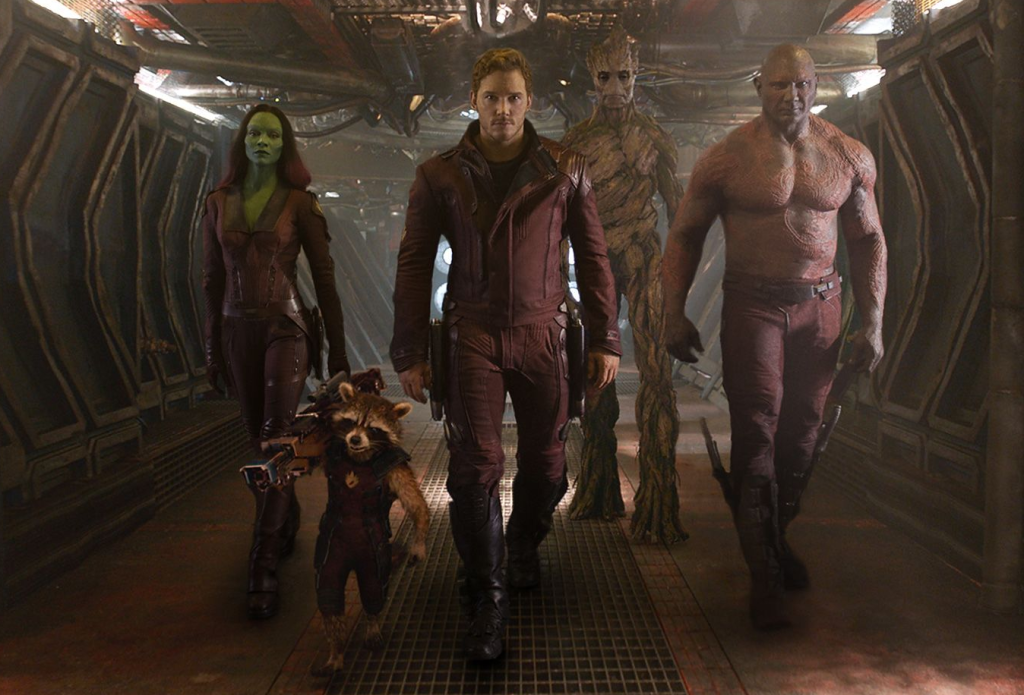 This article contains spoilers, obviously.  These spoilers come in the form of set images, interviews, comic canon, and casting.  Proceed with caution.

With the recent premiere of the Guardians of the Galaxy trailer, it feels like the Marvel Cinematic Universe suddenly got a shot of adrenaline as far as mainstream media coverage is concerned.  We all know that Captain America: The Winter Soldier is right around the corner and we’re just a few months past Thor: The Dark World.  Both of these films have definitely generated a fair amount of buzz in mainstream press already.  The difference is that Guardians of the Galaxy is an entirely new set of characters in an entirely different environment.  It’s fresh.  It’s exciting.  It’s not something anyone has seen on the big screen before.  Suddenly everyone is talking about it, even those that haven’t been following the MCU since it started so many years ago.  I don’t know about you, but I’m very excited about all of this.

For those of us who do pay extremely close attention to this type of stuff, though, things have been happening steadily for quite some time.  In fact, Avengers: Age of Ultron just started filming last week and footage is already starting to leak onto social media.  We’ve also had a steady stream of casting news regarding Ant-Man and speculation regarding the script.  Then there’s good old Kevin Feige dropping hints at upcoming projects including a possible Black Widow movie.  There’s lots of information to dig through and I hope that I can outline what’s coming in this article and possibly subsequent articles as more information comes out.

This one comes out in a little over a month.  We have the return of Captain America, Black Widow, and Nick Fury along with a new addition to the MCU, Falcon.  We also have the return of, well, the Winter Soldier.  It’s kind of a not so secret-secret about his identity.  Since this article is all about spoilers, it’s safe to just say it.  If you don’t want any spoilers at all turn back now.  It’s Bucky Barnes, you guys.  Steve’s best buddy.  You know, the one who had a not so pleasant fall from the train in the first movie.  That guy.  That isn’t even remotely the biggest spoiler about this film, though.  He’s the title character, after all.  Anyone who has either read the comics or engaged in online fandom is aware of who he is.  What is a massive spoiler is what other villains could be popping up.  More on that after the trailers.

There’s a very very high possibility of Red Skull showing up in this film.  He’s not listed on any official cast list, hasn’t shown up in the trailers, and isn’t mentioned in any of synopses.  So why do we think he’s going to be in this film?  Merchandising!  There’s a Red Skull toy being released along with the other Winter Soldier toys and the official soundtrack has a track called “Alexander Pierce is the Red Skull.”  Granted that ‘track’ is only :03 long, but that’s still a pretty big clue.  The fact that Marvel quickly removed that listing is also a big indicator that they accidentally blew their surprise on this one.

Guardians of the Galaxy 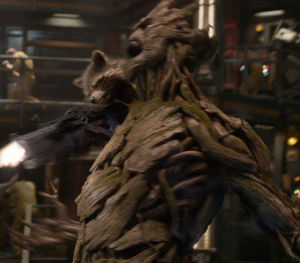 In the original comics there are a lot of tie ins to the Avengers and it certainly looks like there will be plenty here, too, but the bulk of the material is completely new to the universe.  We’ve got a whole new cast of characters, including a raccoon with a ‘talking’ tree friend who is his “houseplant/muscle,” that haven’t appeared in any of the other films.  While we have a taste of other realms and space in previous films, most notably in the Thor films, there’s a bunch of species here that we’ve never seen anywhere else.  People who haven’t been obsessively following the franchise should be able to jump in without having any knowledge of the films that come before it.

As far as tie-in’s go, we have one major one that’s obvious from the trailer.  One of the antagonists from this film, The Collector (played by Benicio del Toro), showed up in the mid-credits sequences in Thor: The Dark World.  It’s definitely being established as the same universe even for those who are generally unfamiliar with the source material.  If you stood up and left during the credits (never do that at a Marvel film, guys, seriously!) this one might go over your head, but if you know better and kept your butt planted in the seat until the lights went on he’s easy to spot.

Another major tie in is the character Thanos.  In GotG we have Karen Gillian playing Nebula and Lee Pace playing Ronan, both of whom work for Thanos.  Right now we know that Thanos will be in the film, but we’ve been told that Ronan is the main vaillain.  Nebula certainly has a big part to play, too, if Gillian’s involvement in the press and her glimpses in the trailer are any indication.  So while he might not be the main antagonist, his presence in the film is definitely felt even before we catch a glimpse of him on screen.

So who the heck is Thanos and why should you care?  He appeared in the very last scene of The Avengers when he briefly turned and smiled at the camera (if you didn’t know who he was, it was an easy moment to gloss over), which was apparently a clue that the Tesseract was an Infinity Stone.  If you don’t know what an Infinity Stone is, don’t worry.  That concept hasn’t really been elaborated on in the films yet.  If you know what it is, you’re ahead of the game.  Though not seen before that moment, he was also essentially a string puller behind much of Loki’s antagonism in The Avengers.

Here’s where the spoilers get super fun if you’re into speculating lots of things based on very little.  I certainly am.

As I mentioned earlier, the Avengers sequel just started filming last week.  Their first location is set on the streets of Johannesburg, South Africa and footage has already leaked.  A local filmed some of the action and put it up on Instagram.  The person who gathered the footage speculates that the Hulk is fighting the South African Army. We can’t see that for sure, of course, since he’s created with CGI, but they do have a big Hulk head being carried around by two guys as a stand in.  One shot even shows a truck supposedly being flung aside in the same general area where that awkward Hulk head thing was being used.  Someone also Tweeted further destruction from the scene.

So what can we gather from this?  It seems fairly obvious that the Hulk goes on a rampage through South Africa for some reason.  Since we haven’t heard anything about any big name stars being on the set it’s possible this is a Hulk-only scene.  Whether the other members of the team are even present at this point in the movie is unclear.  He could be off doing his own thing or they could be nearby, but just not required on this particular shoot.  The shooting schedule is going to be truly international, though, so it’ll be interesting to see who shows up on what sets.  They are slated to film at a gorgeous fortress in Italy (source is in Italian, so get your translation tools ready) and in Seoul, South Korea.  I can only hope that Instagram and Twitter savvy locals in both locations will be on their game to get us some sneak peaks like our South African observers were.  (I’m getting some seriously #Setlock vibes from this whole thing.)

Besides these fabulous tidbits from the set, we also have some casting news.  Paul Bettany will be playing The Vision.  In the original comics he was an android created by Ultron to fight the Avengers, but he later joins them.  Since the film is titled ‘Age of Ultron,’ I’m going to go out on a limb and assume we get the antagonist version of the character for this film.  Whether he’ll join our intrepid band of heroes over the course of the film or if he’ll remain a foe remains to be seen.  Guess we have a year to speculate on that plot point.

Of the titled films that we know of, this is the one that we know the least about.  It’s currently in pre-production and is scheduled to be the first film in ‘Phase III.’  Paul Rudd will play title character Ant-Man, also known as Scott Lang.  Michael Douglas will play Hank Pym.  Michael Pena will play… someone.  We don’t know.  Nobody knows.  But he’s part of it.  Evangeline Lilly is “in talks” to join the cast.  So we’ve got a lot of people either signed or getting close to signing, but nothing has been shot yet.  Filming is expected to start in the middle of this year with a release date for July 31st, 2015.

As far as plot goes, it sounds like it’s going to be pretty self contained.  While Hank Pym is the creator of Ultron, our big bad from our Avengers sequel, it’s definitely not part of Ant-Man at all.  In fact, he isn’t going to be Ultron’s creator in this universe.  It seems like this would be an obvious tie in to the main franchise, but the original script has been floating around long before the franchise really got up off the ground and they didn’t include it in the subsequent revisions.  It’s also interesting that Rudd will be playing Scott Lang, who is actually the second person to take on the ‘Ant-Man’ title in the comic franchise.  Pym, played by Douglas, was the first to take on the title, but isn’t being dubbed ‘Ant-Man’ in the film.  That’s pretty much all we know as far as plot goes.

While Ant-Man is the official start for Phase III, there are several other films scheduled to be released throughout 2016 and 2017.  Kevin Feige has stated that he wants to have two films each year, one with an already established character and one with a new character to the franchise.  There will be at least three more films in phase three besides Ant-Man, two of which will be in 2016 and one the following year.  Below is a list of possible new and returning characters that have been mentioned in passing or are actively having scripts written about them.  Keep in mind that none of this is confirmed, even if a script is actually being written.  Scripts are rejected all the time.  But chances are much better for a character with a script actually making it into production than one who doesn’t have one at all. 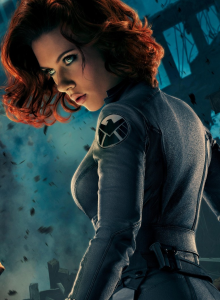 5 thoughts on “Status of the Marvel Cinematic Universe”