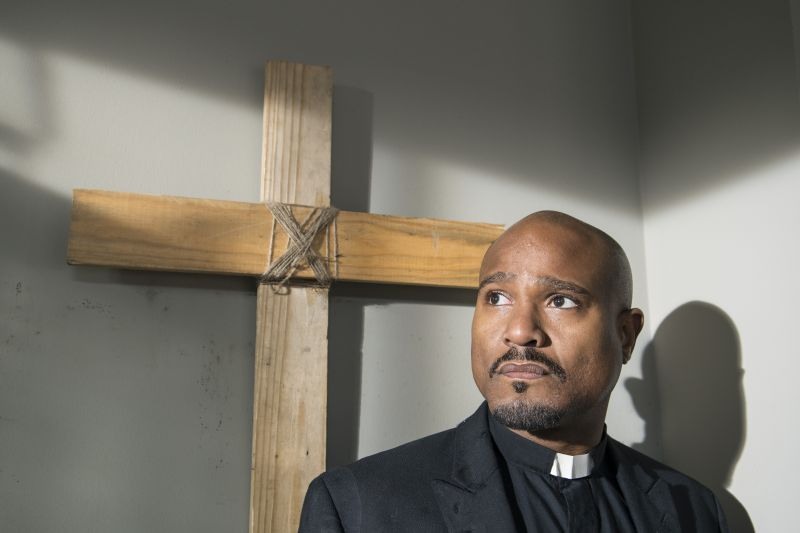 I have to say that this episode of The Walking Dead was one of the more disturbing episodes of this show ever – if not the MOST disturbing. And on top of that, it was disturbing on several levels, to the point where I almost don’t know how to begin.

In a way, I think that with “Spend” it’s best to start by combining Gabriel’s scenes from the beginning and the end. While it seems that other members of the group are fitting in (Maggie), trying to do so (Eugene), or at least faking it (Carol), Gabriel has clearly gone off the deep end. He starts by ripping pages out of the Bible and ends by “ratting out” the group to Deanna. Did he completely forget the terrible decisions he made, the people who died because of his cowardice? 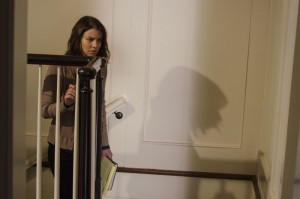 It didn’t seem that Deanna outright believed him, and of course Maggie overheard him, so at least she’ll be able to warn the others. And speaking of Maggie, interesting that she’s *already* sitting and weighing in on important meetings – and has possibly (maybe even apparently?) had some influence on some of Deanna’s decisions regarding placing certain members of the group in positions of ‘power’. 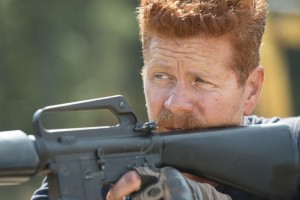 Of course the most recent example of that happened in this very episode, as Tobin insisted on passing his job as construction crew leader to Abraham. Now, Abraham had a couple of interesting moments in “Spend”, moments when I wondered if perhaps he was going the way of Sasha, unable to handle this “Safe-Zone Nonsense”. But the moment danger threatened, he seriously stepped up. Not only did he save Francine from certain death, but he inspired another crew member (Bruce) to go to their aid. And then Abraham convinced the workers to stay on site and continue collecting supplies for the wall! It was one of the few almost (almost) positive story lines in this episode. 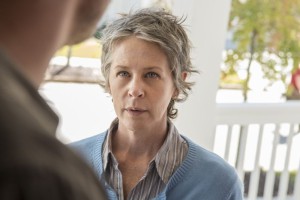 Now, while I still have serious concerns about Carol, she also seemed to take a step back from the edge in “Spend” when she realized that Pete was beating Jessie and possibly Sam as well. Her reaction – and her attempt to call Rick to action – don’t exactly outweigh the fact that she was so recently threatening this kid, but perhaps this will be the first step toward her turning around…or at least continuing to move away from that edge.

But even with everything happening back in Alexandria, the most insane part of this episode centered around Eugene, Tara, Glenn, Noah…and those two jerks from Alexandria. What are their names again? Oh wait, I just realized, I don’t care.

(For the record, their names are Aiden and Nicholas, but for the purposes of this review I’m going to refer to them as Asshat Aiden and Asshat Nicholas.)

It was obvious that this supply run was a bad idea from the start. The worst part about it is that they didn’t really give enough background as to why it was such an important run, or go into exactly what they were looking for and why. I know a bit of background from the comics, but that doesn’t excuse the show from giving a better explanation of what they were up to – especially when it had such consequences.

Again, though, the whole thing screamed bad idea. They insisted that Eugene goes, despite his protests that he was worthless and would be more a hindrance than anything. They entered a building that only had one decent exit. Oh, and they brought Noah, who has a bum leg. Seriously, I’ve been wondering why they put Noah on the supply run team, and “Spend” pretty much just made me think that they did it because it was an easy way to kill him off whenever they felt like it. I could be wrong, but after they got rid of Beth in “Coda” I lost a lot of faith in how well they plan out character deaths on Walking Dead.

Not to mention that in addition to Eugene, Tara, Glenn, and Noah were weighed down by Asshats Aiden and Nicholas. And in the end, Asshat Aiden’s stupidity doomed them even more, while Asshat Nicholas’ cowardice surpassed even Eugene’s. (Who in the end turned out to not be so cowardly as he claimed, after all.) While Asshat Aiden’s death was disgusting (almost overly so), it was expected considering how obnoxious he was.

On the other hand, I definitely misread the signs for Noah’s death – or hey, maybe they weren’t there at all, and this was just another time when the writers just wanted to see how badly they could shock viewers. His manner of death was as disgusting as Asshat Aiden’s, but far more disturbing, considering why it happened (Asshat Nicholas), considering that Glenn witnessed it and is obviously messed up about it…and also considering that Noah was a good kid, and not, you know, an Asshat of the First Degree.

That said, Tyler James Williams mentioned on Talking Dead that he knew he was doomed when Rick covered Carl and then Noah with blankets one night when they’d just arrived in Alexandria, and immediately after, Chris Hardwick said that he should have seen it coming because Noah expressed interest in and hope for the future at the beginning of “Spend”. I still think it was an untimely death for this specific character, but between what Asshat Nicholas pulled and the fact that Francine would have died had Abraham obeyed Tobin, it certainly seems that the Alexandria people are at least half worthless. Glenn may have said that they were out there too long – but for the most part, they can at least be trusted to help others. Even people they barely know (Abraham saving Francine) or outright don’t like (Glenn trying, until the very last moment, to save Aiden).

Chris Hardwick also mentioned that this could have been a season finale, because “so many messed up things happened”…and he definitely has a point. I think we should all take his advice about preparing ourselves for the season finale, because even when they make what I think are questionable decisions, the Walking Dead writers sure know how to wrench out viewers’ hearts.

And we’re already seeing that (so far, at least) this show isn’t allowing things to slow down just because they’ve arrived in this so-called “Safe Zone”. Bravo on that!

Previous:DRUNK FEELINGS… with The Geekiary
Next: FEELINGS Daily: Rose and The Doctor Were Totally a Thing